Theme: Each starred clue is the name of a celebrity whose first name is a famous fashion house. 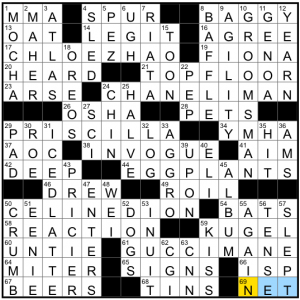 First and foremost, congrats to Joshua on his NYT debut! This was a fun puzzle to solve – I wasn’t sure what the theme was until I hit the revealer, and it was a nice aha moment. I liked how female-centric this puzzle was – even GUCCI MANE, the lone male theme answer, gets a Lizzo reference in his clue. It might have been confusing that two of the non-theme across answers, PRISCILLA and EGGPLANTS, were the same length as two theme answers, but starring the theme clues avoided any confusion there – a nice choice to allow for some more long fill.

I wrote a few weeks ago about the problem with easy puzzles relying on proper names for themes – if you don’t have the knowledge base the puzzle requires, it becomes much, much tougher. I think that’s a problem that some folks might run into here, but because this puzzle has the overarching fashion theme, solvers can come at the answers (or the first half of the answers, at least) from either direction, by knowing the fashion house or the celebrity. I personally didn’t know Celine the fashion house, or who CHANEL IMAN was, but because I knew Chanel and CELINE DION, I felt satisfied as I figured them out.

Very clean gridwork today overall. The big northeast and southwest corners really shine: it’s tough to fill an open corner like that cleanly, but this puzzle does it, with fun longer answers to boot (ICED LATTE! GROOMSMAN! AGILITY!). I didn’t love YMHA and didn’t know WEI, but the crosses on both entries are fair.  I got a little tripped up on thinking that 54a [Have ___ in one’s belfry] was going to be “a bat”, but luckily it was the much cleaner BATS (According to Google the plural version is the real phrase; I apparently can only handle a single belfry bat at a time). 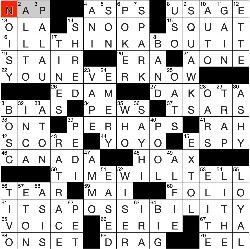 Looks like LAT intended that for Labor Day, one should not have to labor very much to figure out what’s going on with the theme. More typical of a Newsday Monday or Tuesday IMO, there’s not any wordplay to this theme — all the themers are simply things you might say when you’re feeling noncommittal.

Not much to say about this theme — I’m not averse to “lots of ways of saying something similar” themes, although they’re more fun if some other element of wordplay is brought in with the cluing.

Given that this took me 2:19 (in large part because I spent too much time on TIME WILL TELL; probably would’ve been quicker to do this Downs-only), I was surprised to go back and notice that there really isn’t much tough fill in this puzzle, with the exception of the OLA–PALAU crossing at 13A/4D. I enjoyed the 9D clue [Parrots a parrot] for SQUAWKS, which in itself is a fun word. 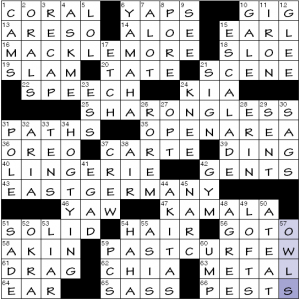 Tidy theme, and the paired ordering is perfect. 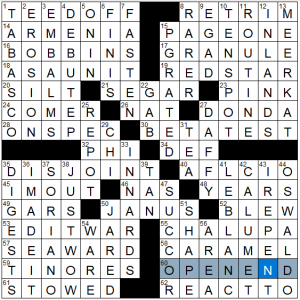 Writing from the road with a dying laptop, so gotta be quick today. It’s probably a symptom of when I got into NYT puzzles, but I love themeless grid designs like this, with four corners and lots of 6- and 7-word fills. Today’s from BEQ had a good amount of challenge in each corner, and I think even difficulty throughout, which can be a problem in grid layouts like this. Perhaps it’s a little name-heavy, but many of the crossings brought a smile to my face, at least.

My favorite area by far was the SW corner, with EDIT WAR (53a- Conflict between Wikipedians), JUST WOW (38d- “Incredible, man — incredibile!”), and a little bit of misdirection in DIGESTS (35d- Takes in).

I particularly liked the clue for ARMENIA (14a- Country with the oldest known wine-making facility). I took a course in Classical Armenian in college and have always loved learning more about the country and its history.

I can’t easily find the clip from the short-lived Britcom The Vicar of Dibley that revolves around SUCCOR (47d – Helping hand), but I highly recommend the show to anyone who wants a laugh.

Theme: Every themed answer includes the letters “ABC” within it. 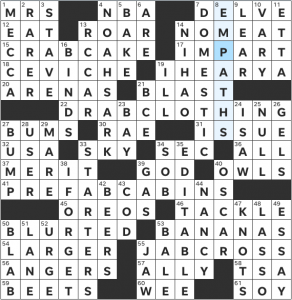 I was curious when I saw that the title was “Now I Know My ABC’s” to find how the theme played out, and I think it did so relatively successfully. JAB CROSS was my favorite answer, though, at first, I really wanted the latter to be ONE-TWO PUNCH because I thought that would’ve been clever. JAB CROSS ended up working out really well and being very creative, so that’s a new fave. PREFAB CABINS, DRAB CLOTHING, and CRAB give us a lot of assonance with their short “-ab” energy, which was kind of fun and could’ve been a theme in and of itself.

The aesthetic of this grid was very appealing to me with the diagonal squares in the middle breaking up the rows into a 4-3-5 (BUMS–RAE–ISSUE), 3-3-3-3 (USA–SKY–SEC–ALL), and 5-3-4 (MERIT–GOD–OWLS) pattern. It felt a little bit like a gridded haiku, with the same word-lengths in the top and bottom of that trio and a longer middle line. On top of that, this section felt cemented by DRAB CLOTHING and PREFAB CABINS.

Other clues worth noting:

Honestly, I could BLAB (50d [“Spill the beans”]) about this puzzle all day, so I just want to quickly say that I also enjoyed 42d [“Hands a brewski to”] BEERS and 44d [“Drew of children’s literature”] NANCY.

Overall, great puzzle! Shout out to Amanda Rafkin, who edited this one and to Aaron and Olivia for a JAW-dropping start to the week! 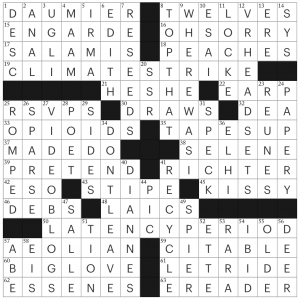 Bumpy solve on this New Yorker puzzle. All the corners were tricky, particularly the SW and NW where I felt that the fill got a bit gluey. 57a. AEOLIAN and 62a. ESSENES crossing   57d. ABE clued as [Former Japanese P.M. Shinzo] and the suffix –TION at 51d.? Oof. Even in the NW, where I got lucky, the fill wasn’t ideal. Had I not known 1a. DAUMIER off the top of my head, the crossings would have been a nightmare to work: 1d. [Genealogical abbr.] is DESC, 3d. [Tangelo trademark] is UGLI, 5d. [____ La Douce” (1963 Shirley MacLaine title role)] is IRMA, and 6d. [Head of Hollywood] is EDITH. (As a side note, I did actually like the 6d. EDITH clue, but thought it was used inappropriately in this grid, as it contributed to the NW difficulty).

Some clues that jumped out at me:

15a. [Pointed warning?] –– This was a fun one for the exclaimed EN GARDE. Clever!

17a. [They’re cured!] –– I always like seeing playful clues, and this one for SALAMIS definitely fits the bill. Very endearing.

24a. [Tissuelike] –– I had this as SPONGY originally, thinking it was going for the anatomical angle, but got PAPERY when I realized it was the Kleenex type.

38a. [Lover of Endymion, in myth] –– I got this one from a line in The Merchant of Venice: “Peace! How the moon sleeps with Endymion / And would not be awaked.” The moon in myth, of course is SELENE. Shakespeare can be unexpectedly useful!

63a. [Device to get texts on] –– Nice, tricky misdirect: instead of text messages, we’re referring to books and other texts, making E-READER.

27d. [Ways to make oneself content?] –– Though I got the pun straight away because of its somewhat awkward syntax, I still liked this angle for a social media related entry. What I didn’t like as much was the actual answer, VIDEO BLOGS. I guess it’s technically more correct than its abbreviation VLOGS, but really, when have you ever heard someone call it a VIDEO BLOG? It’s like using the long form of “radar” (technically an acronym for (RAdio Detection And Ranging), “scuba” (ISelf-Contained Underwater Breathing Apparatus” or (Light Amplification by Stimulated Emission of Radiation). Not technically wrong, but feels forced.

52d. [Kitchen extension?} –– Cute, playful clue for ETTE! Instead of a physical kitchen extension, the answer functions as a suffix. Together, this makes KITCHENETTE, which, ironically, is a miniature rather than extended form of a kitchen.

55d. [Like some shoppes] ––The syntax of this was surprisingly refreshing: even though OLDE is often clued with this spin, I liked the clue more than the standard [Ye ____ shoppe]. Speaking of which… A fun fact about “ye” is we’re all mispronouncing it! In Old and Middle English, our alphabet included a thorn character (þ) which was pronounced with the “th” sound. Due to font choices and handwriting, it often bore a similarity to the letter “y” and led to our modern day confusion.

All in all, an okay puzzle, but not particularly exciting.