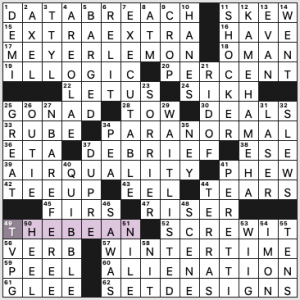 This puzzle has so much great fill, I forgive the clunky bits in the glue. Look at all these cool entries: There’s the dreaded DATA BREACH (great clue, 1a. [Hack job]). “EXTRA, EXTRA, read all about it.” We learn a MEYER LEMON is native to China. PARANORMAL GONAD, feels like an insult. DEBRIEF is good, I love AIR QUALITY (gotta have a weather app that reports the AQI), THE BEAN from Chicago’s Millennium Park, “SCREW IT,” WINTERTIME, ALIENATION, SET DESIGNS, NBA REFEREE, QUIBBLE, Jacqueline DUPRE, WAIT-LISTED, SHOCKER, KAMEHAMEHA the GREAT, and Elsa PERETTI. PERETTI is close to my heart because my friend Susan (rest in peace, my dear friend) gave me her Peretti kidney necklace on the occasion of my kidney transplant.

Little bits like NEY, ESE, RELIT, and SAW AS felt very meh indeed, but the overall experience was a good one. 4.25 stars from me. Keep the themelesses coming, Adrian!

Theme: All of the theme answers include a word that can comfortably be placed before (as in left of the)“mark” in a common phrase. 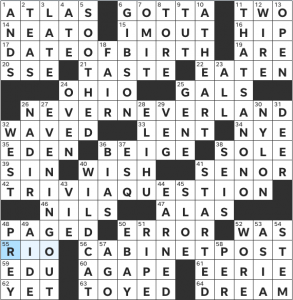 I enjoyed this theme quite a bit and thought that the theme answers were creative and fresh. I was a bit confused in typing DATE OF BIRTH rather than BIRTHDAY, but it ultimately made sense. The clue for 26a was perfect – I immediately filled in NEVERLAND with a double NEVER.

I also really enjoyed this grid. Under 3 minutes is a new record for me (I’m no speed solver), and I feel like I went for a pleasant cruise through this one. However, it was both aesthetically pleasing in its diagonally-formatted center section and in a nice balance of clue lengths.

My Friday Faves are:

Well—and Wendy queued this up perfectly for me—I’M OUT (15a [“Peace!”]). Have a great weekend! 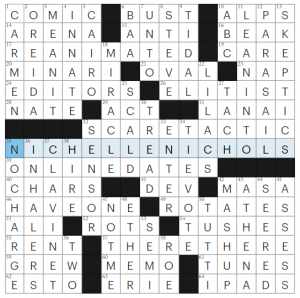 Good morning, solvers! I am back after a three-ish week hiatus. I was on the first vacation I’ve taken in over two years, and I feel rejuvenated as hell. Thanks to all the fiend-ers who stepped in for me so I didn’t have to worry about posting while I was out of the country.

A lot of the Erik Agard puzzles I solve for the New Yorker have a central (presumably) seed entry that is the name of a famous person that I have not heard of, fairly crossed. After I solve the puzzle, I like to look them up and see all of their accomplishments. Today’s was NICHELLE NICHOLS (35A: Actress whose work with NASA is the focus of the documentary “Woman in Motion”), who portrayed Uhura in “Star Trek” and had the first interracial kiss on TV. Even though I had not heard of her name, I have heard of that scene. She helped NASA to recruit more diverse employees, including Dr. Sally Ride.

This sparkliness of today’s puzzle came from the clues. SCARE TACTIC (32A) is a nice entry, for example, but the clue, “Something used to make a chicken stew?” was *chef’s kiss*. Similarly with “What computer users might click on?” for ONLINE DATES (39A). I always enjoy a reference to ANTI (15A: Rihanna album with the track “Kiss It Better”) because then I am reminded to rewatch my favorite video of all time, below.

I wasn’t crazy about OREIDA (2D: Frozen food brand that trademarked Tater Tots), LANAI (31A: Veranda that shares its name with a Hawaiian island), and TACH (27D: R.p.m. gauge). These are three words where, not only did I learn them exclusively from crosswords, but after about a year of solving, I still haven’t ever encountered them in the real world. Perhaps I should spend more time in the frozen food aisle. Or in Hawaii. Or in a car. (Lol as if, NYC public transit is too good.)

Other things: I loved the reference to “Where in the World Is CARMEN Sandiego?” (1D), MIRACLE (18A: Even a minor one is really good), and the clue for NO CHARGE (35D: Punchline to a joke that starts with a neutron walking into a bar). I have never heard of a CLAVINET (37D: “Superstition” instrument) (I’m listening to “Superstition” right now, what a bop), and I have just now looked up why the number TWO sometimes follows LBTQUIA (5D). (It refers to “two-spirit” which is a Native American term too complicated to summarize in a sentence.) I will close on a mildly fun fact, which is that “TUTTI frutti” (50D) directly translates to “all the fruits” from Italian. It’s like saying “todas frutas” in Spanish. 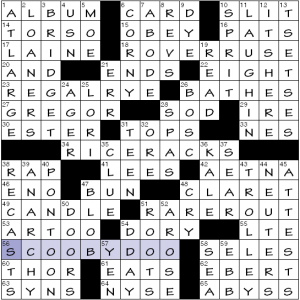 Rhotic replacement is the name of the game here, with an added twist of employing homophones, as necessary, to the results to transform them into real words.

I saw the theme developing, but assumed it was just going to be an Rs-in-front-of-words thing, not expecting the Scooby-Doo connection, which gives it a rationale.

All right, that’s all I’ve got this morning.

Theme: Birds are “whirled around” and found backwards inside familiar phrases. 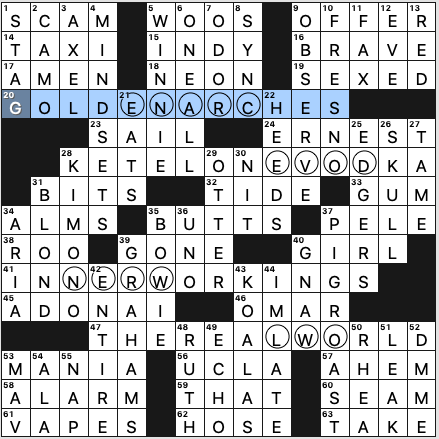 Cute and consistent. The birds all span more than one word and the phrases themselves are familiar if not fun. Generally in hidden word themes, the longer the hidden word the better, IMO. So I like CRANE better than OWL, but all in all, this is a nice set.

Speaking of sets, we get MINDSETS as the first nice long Down entry. Elsewhere there’s a Hawaiian PIG ROAST plus “I’M LATE!,” Teddy GRAHAMS, KOALAS, KIMONO, and FRESNO.

I’m not sold on DM ME [“Let’s chat privately,” on Twitter] being crossword-worthy. Thankfully the crossings were fair, but still, I hope not to see this again. 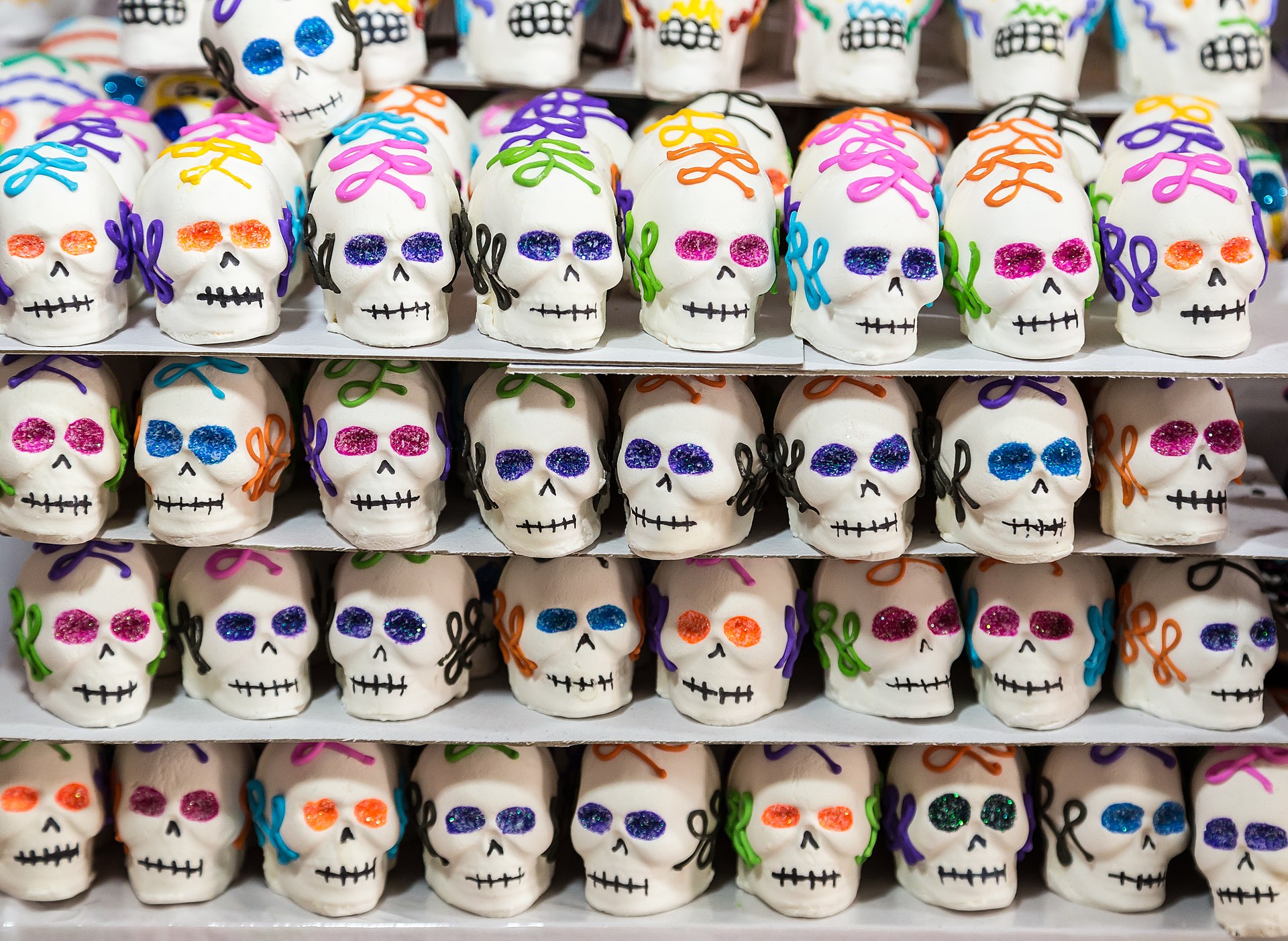 Cute puzzle with clean fill (minus DM ME). 3.8  stars. Oh, this appears to be a debut! Congratulations, David, on a fine grid. Keep up the good work.

Lovely debut puzzle from the Inkubator this week! Congratulations, Liz!! 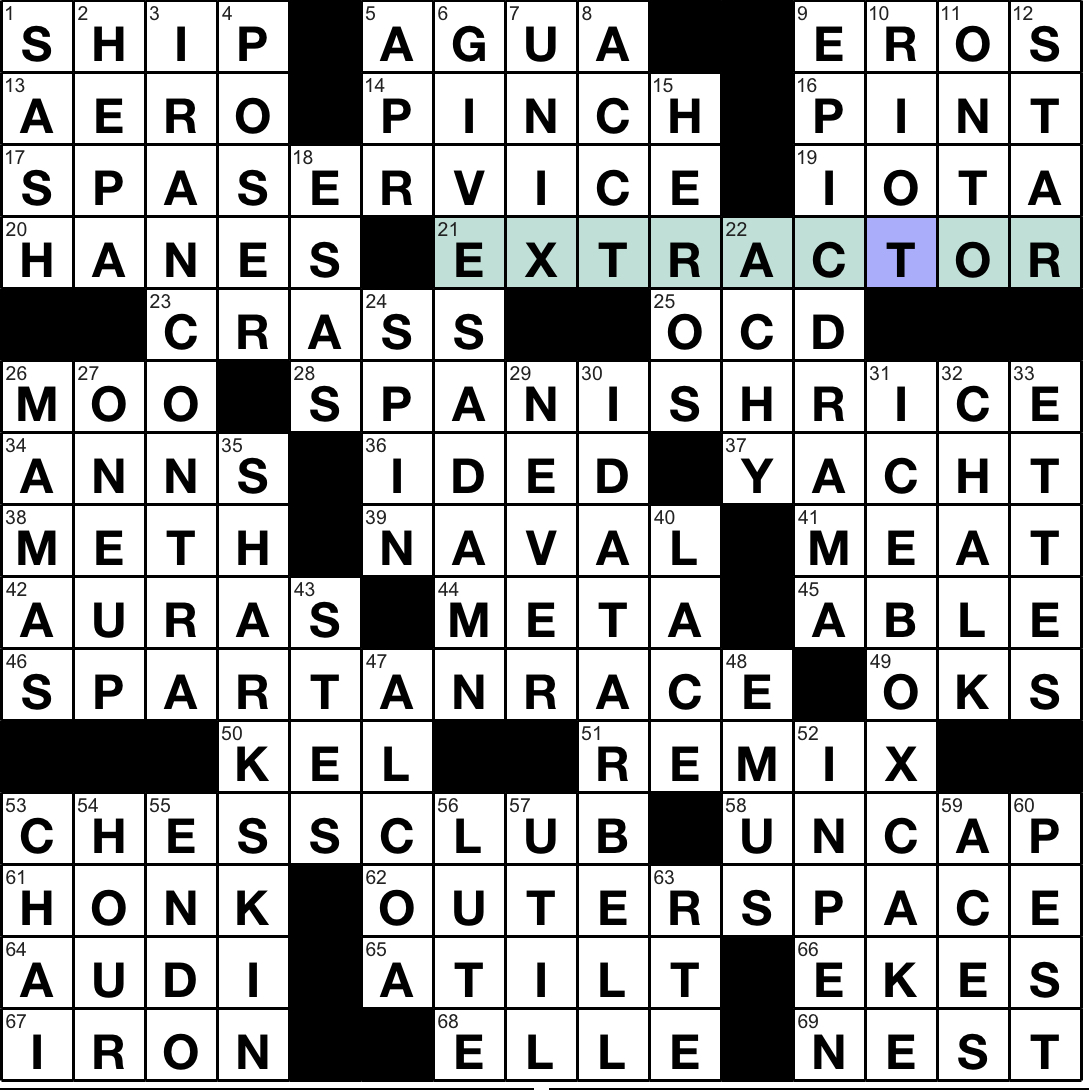 We have a bookend theme today, with the word SPACE split across the starts and ends of each theme answer, with the appropriate revealer OUTER SPACE. Very well-executed example of this style of theme that made for a really lovely easy puzzle.

We have some really great fill throughout. I love seeing so many long downs holding the puzzle together and IRAN CONTRA, EPIC DRAMA, GIVES A DAMN, IDA TARBELL, ICEBOX CAKE and SHARKSKIN were all great entries. Impressive in both variety, and volume.

Here’s that Savage REMIX for your listening pleasure