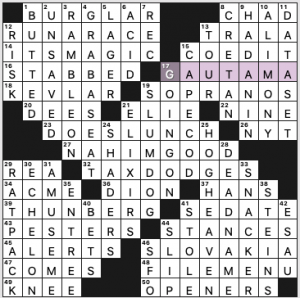 Oof, this puzzle kicked my butt! I’ll attribute it to not having much short fill with which to crack into each section, and having the longer entries’ clues feel impenetrable for too long.

Lots of great fill, though. On my “hell, yeah” list, we have GAUTAMA Buddha (raise your hand if you read Siddhartha in high school), a KEVLAR vest, DOES LUNCH, “NAH, I’M GOOD” (which some may grouse isn’t solid enough to be a crossword answer), TAX DODGES, Greta THUNBERG, SLOVAKIA with geo trivia I didn’t know (46a. [Home of the only world capital to border two other countries]—Bratislava borders Austria and Hungary), GRAB A SEAT, CAPE COD houses, SLUMDOG, ELIXIRS (I’m just so fond of that word—what beverage is your elixir of life?), HOG HEAVEN, DEAD NAME (I dig it that I can’t remember the dead names of the trans folks I’m acquainted with), and RAT PACK.

Coupla entries felt iffy to me. “AMUSE ME”? 31d. [“Tell a joke or something … I’m so bored”]? is this something people actually say? I also raised an eyebrow at “IT’S MAGIC” (14a. [Eyeroll-inducing response to “How did you do that?”]). And SHADERS looks like a roll-your-own word, though it has a highly specialized clue, 24d. [Computer programs used in 3-D animation]. (Furthermore, seeing ITSMAGIC in the grid prompted an earworm with a 1970s song. Sid, if you don’t know the song, I believe you’re obligated to listen to it.)

Sid likes the five-part grids with four wide-open corners spiraling around a bonkers wide-open center. It’s pretty but it might make me dizzy. I think it’s a 62-worder, and it’s impressively clean for such a hard-to-fill grid. 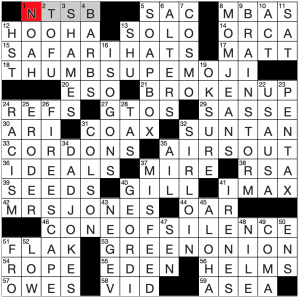 I am not too familiar with this byline, but I think I have seen it at least once before. Not too hard of a puzzle, but it is a fair bit of a challenge, especially compared to some other ones. I’ll mention a couple of them below, but this also has a lot of great entries. Here’s hoping for more puzzles like this from David! 4.7 stars from me.

I will stop there. I have other puzzles to do! 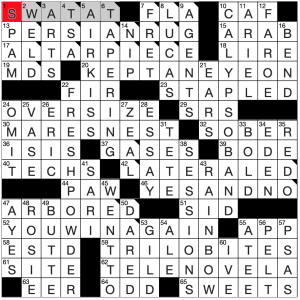 Another kinda tough one for me. Look at all those error marks! I will surely solve in Black Ink next week! This one “stumped” me pretty good, but that is OK! It wouldn’t be any fun otherwise! The difficulty has indeed ramped back up a tad, and that isa good thing. Nice puzzle, Matthew! I’ll do better on your next one! 4.6 stars from me.

THEME: Phrases that could also literally be pieces of cake. 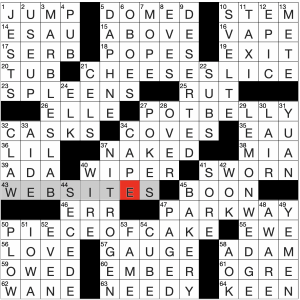 It was fun to uncover the revealer (and found that 27- and 43-Across had nothing to do with the theme) to get an aha moment. At first I though just the first word would have anything cake-i-ness to it, which I believe I’ve seen more than a couple of times as a theme, but I enjoyed the realization that the entire phrase was cake-related. Revealer couldn’t be more spot on.

ADAM Driver. Anyone see his new film? Annette? I’m thoroughly confused by it.

Why are islands always DESERTED in cartoons? 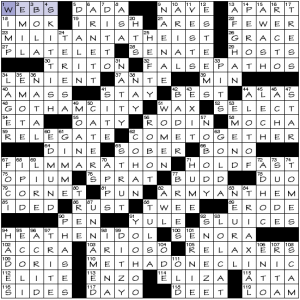 The title is to be parsed as T-H rift. Phrases with a th digraph instead break apart the consonants for two separate words.

These are … not good. The wackified phrases are tortured, the clues are more tortured, and the original phrases are spotty, uneven. The only one that works—and admittedly it works well—is COME TO GET HER. 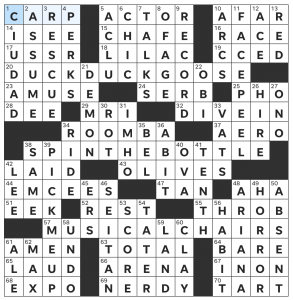 Nice puzzle today! Theme consists of three familiar childhood games, 20a. DUCK DUCK GOOSE, 38a. SPIN THE BOTTLE, and 57a. MUSICAL CHAIRS. Simple, but I liked this theme—they all fell in the category of multiplayer party games, and they’re fun, nostalgic entries.

Some answers that popped out at me:

1a. [Gefilte fish ingredient] — With Rosh Hashanah just past and Yom Kippur fast approaching, CARP is an aptly clued entry.

34a. [Self-moving vacuum] — Flashy piece of fill with ROOMBA. I find them quite endearing as pseudo-creatures (although my dog hates them).

47a. [France of Queer Eye] is TAN, which reminds me that although its sixth season has been confirmed, we don’t have a release date for it yet. :(

67a. [Barge ___ (rudely interrupt)] — Not a huge fan of the partial IN ON, especially when it could have been framed as it’s own individual phrase with a clue like [Privy to, as a secret].

11d. [Skin-smoothing spa treatment] — Despite the rather macabre name, I enjoyed seeing FACE PEEL here; it’s an entry with a certain level of evocative specificity that remains feeling fresh.

39d. [Restorative cocktail] — What a nice clue—and nice entry—with PICK ME UP! Something I don’t see very often, and a very interesting morsel of fill.

46d. [Wheat gluten] — SEITAN has been ever present on my TikTok for you page recently, thanks to a viral recipe using it as a chicken substitute. It’s on my list to try!

One discrepancy: I can’t see an author name! Not sure if it’s a glitch with this puzzle or with the USA Today website. I really enjoyed the puzzle, but disappointed I can’t give credit. Who’s the mystery constructor???