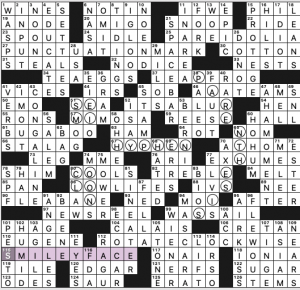 This wide crossword (22×21) offers a visual aspect to the theme. The circled squares spell out, from top to bottom/left to right, the punctuation marks that make up an emoticon smiley face (this one is winking): SEMICOLON, HYPHEN, and PARENTHESIS. The traditional themers are:

It’s a cute theme and I liked it but didn’t love it. I didn’t time myself but the clues felt maybe a little harder than usual. There was lots of pop culture and cultural references that I knew right off the bat, but I started out stymied by both 1a. [They come with bouquets] and 1d. [Eastern cicada killers, e.g.]. Bouquets of WINES, and cicadicidal WASPS. Some fill felt clumsy (partials, crosswordese) but I did appreciate CONGA LINE, AHA MOMENT, AIR KISS, LOWLIFES, BUGABOO, and SPACE BAR with the clue [What can make men swear from menswear?]. 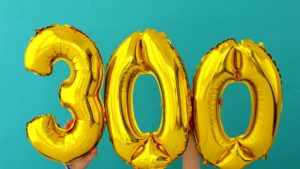 First off, a hearty congratulations to Evan for publishing his 300th crossword for The Washington Post. I’m stunned it’s been that long. I have very specific memories of solving Evan’s puzzles on his indy site that feel so very recent.

To celebrate, Evan has slathered a baseball in napalm, lit it on fire, and served up a knuckleball. This one was a doozy.

THEME: Various cartoon characters are off-the-grid (or “over” the grid is more appropriate wording I suppose). The first letters of each of the character’s names, when read in order, collectively spell MEL BLANC. 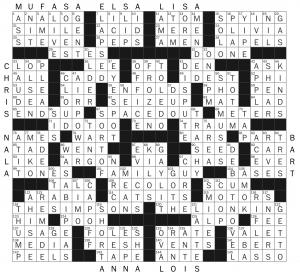 A feat of construction,; multi-layered, tight, extremely clever. And well placed in the line-up (it’s been a while since we had something screwy). Very Birnholz.

A couple technical things to appreciate: I’m sure it wasn’t easy to get the (very good) WaPo webapp to type letters off of the grid. I think it’s only my second time using the site to solve (rather than Across Lite or in print), but it’s an excellent application and a lot of pride obviously goes into that. Also, it shouldn’t go under-appreciated that all of the words in the actual grid are still acceptable crossword fill, even with the first letter of the clued entry missing. That is, MASS, UNIT, FAME, ALIVE, SOLES, AGENT appear as the (still acceptable) ASS, NIT, AME, LIVE, OLES, and GENT. Okay, maybe not the best fill ever, but still passable. I recently solved a puzzle in another publication that used black squares to hide letters in a similar conceit, but it bothered me that the grid did not look “clean” afterward. That is because we I’ve been pampered with how high Evan continuously sets the bar. 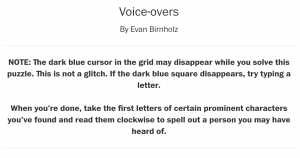 There’s one drawback to solving on the webapp that I would call a major one (at least for me). The instructions at the very beginning of the puzzle all but blatantly give away the gimmick. Like, there was no question for me that I would be forming words off the grid. With a crossword this difficult, why give up the goose? This is not a crossword for everyone… some are going to hate it regardless of whether or not they got the instructions. Let them. It’s as if the note is saying “Hey solver… I don’t trust you to figure this puzzle out, so I’ll help you before you even start!” I’d rather there be a hint in Rot13 or a hyperlink giving me the option of wanting to know the puzzle’s special feature. On the same token, it was very easy to tell where the characters were and were not hidden because of where the “cursor” would or would not “disappear.” So, in retrospect, as enjoyably difficult as the puzzle was, I would’ve preferred a paper solve so I could do a bit more figuring on my own.

Anyways, the timer on my end read 40+ minutes when I had finished solving. I don’t know how accurate that is. I solved it over the course of a few days in a few different sittings with a few distractions, and I just finished up this morning. But it was pretty damn hard. The last thing I filled in was the NW corner where I couldn’t get a foothold anywhere. [Like some bathroom scales] [High as a kite, e.g.] [“Minari” star Yeun] [A secret one may have intelligence] [Pint or gallon, e.g.] [Sunday event] were all left entirely blank. Also, I had LACES for [Things that may be replaced on shoes] instead of SOLES, which certainly didn’t help. I was 100% confident with LACES too because ACES is very acceptable crossword fill. Luckily I finally determined it had to be MUFASA hiding up there, which cleared everything up (my favorite kind of theme is where the fill and the themers work synergistically to help figure one another out, so Evan checked another box with that).

[Legal org. found in Tampa Bay?] ABA. ABA is found in TampA BAy. Those cryptic clues rarely elude me anymore, but this one did. Forehead slap.

[Plant life?] SPYING. A “plant” being a spy in this case. Good one.

[Action film’s following?] CHASE. Another good one. Took me forever to see.

PLENTY of new stuff in the clues too, and fun-fact trivia stuff as well. Too much to list.

Anyways, good stuff today. Frustrating at times, but followed by many satisfying clicks. 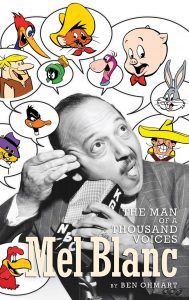 Theme: The letters for SKI are included in reverse order in the three themed down answers, as if being lifted. 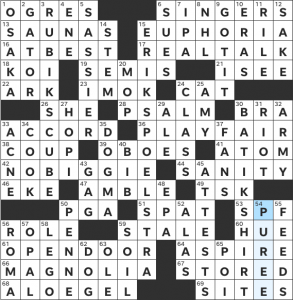 It’s always nice to see a down-centered theme, and I loved the theme answers here. I wasn’t familiar with ERIK SPOELSTRA, the head coach of the Miami Heat, but I was able to catch his name on the crosses no problem. I also always love when RUBIK’S CUBE is slipped into a puzzle, so it was fun to see it included as part of the theme in this one. Plus, I also wasn’t sure what a BATIK SHIRT was but then looked it up only to see that it was a style that I’ve definitely seen, so I appreciated that this clue gave it some more context for me.

I thought that the fill on the longer answers in the corners—especially the top right and lower left—was really well-clued, as such open corners can be intimidating. However, [6a “Choir members”] SINGERS, 17a [“‘I’m gonna be honest with you…’”] REAL TALK, and 61a [“Unrestricted means of access”] OPEN DOOR were some favorites here. MAGNOLIA (66a [“Flower on Mississippi’s state quarter”]) fit in well with the other floral clue 14a [“Flower part”] STEM. However, I’m torn on ALOE GEL (68a [“Natural sunburn soother”]). On one hand, ALOE GEL as a two word answer feels a bit contrived, but it also keeps us regulars who consistently fill in ALOE and then keep going on our toes.

I hope y’all have a great week!

Even before I entered a singled letter in this grid, a glance at the pattern of circles—along with the title—told me exactly what the theme would be. Each set of circles in each theme row contains the name of a well-known American chain eatery, except for one letter which “pops up” into the above row. 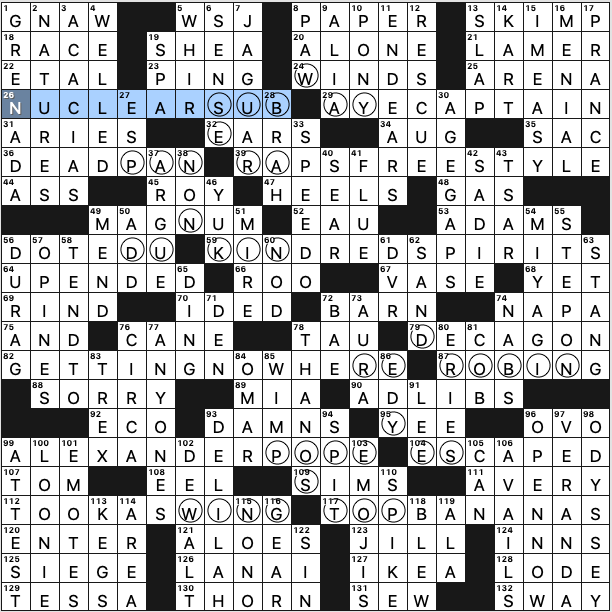 Nice theme, and I like that each set of theme entries spans the entire grid. The short choices for theme entries get the job done, but the long ones are quite nice, except maybe RAPS FREESTYLE which doesn’t feel as strong as the others. There are any number of phrases starting RA- that would fit: RAPID RESPONSE, RACK AND PINION, RANGE OF MOTION, RACE RELATIONS, etc.

Solid fill in the grid though nothing especially sparkly, just a scattering of 7s here and there. Of these, GRENADA, DELILAH, and ODYSSEY are the most interesting. 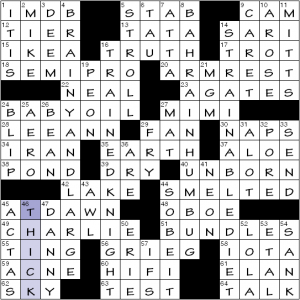 The day is cold, and dark, and dreary;
It rains, and the wind is never weary;
The vine still clings to the mouldering wall,
But at every gust the dead leaves fall,
And the day is dark and dreary.

My life is cold, and dark, and dreary;
It rains, and the wind is never weary;
My thoughts still cling to the mouldering Past,
But the hopes of youth fall thick in the blast,
And the days are dark and dreary.

Be still, sad heart! and cease repining;
Behind the clouds is the sun still shining;
Thy fate is the common fate of all,
Into each life some rain must fall,
Some days must be dark and dreary.

Clear skies here, but a bit on the warm side. 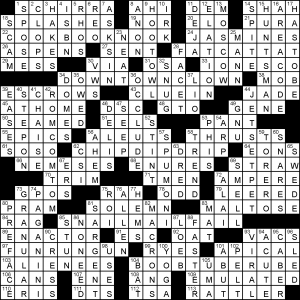 Today’s theme by Mark Feldman is pretty simple: take a reduplicative word; add a third word that follows the pattern; make up a droll clue. Because its so simple we get A LOT of entries: COOKBOOKNOOK, FATCATTAT, DOWNTOWNCLOWN, CHIPDIPDRIP (not TRIP?), SNAILMAILFAIL, FUNRUNGUN, combo-breaking BOOBTUBERUBE and, for good measure, ROMCOMTOM and JETSETPET going down. The concept is fairly open ended, which I guess suits a Sunday, but it requires some wit to stay interesting, which in the case the puzzle maintained, for the most part.

A smattering of other entries: