I’m guessing the title should be re-parsed as “Sent in ELs.” The letters EL have been added to familiar phrases. This is revealed by the entry ELMORE (64a, [“Rum Punch” writer Leonard, and a hint to this puzzle’s theme answers]). 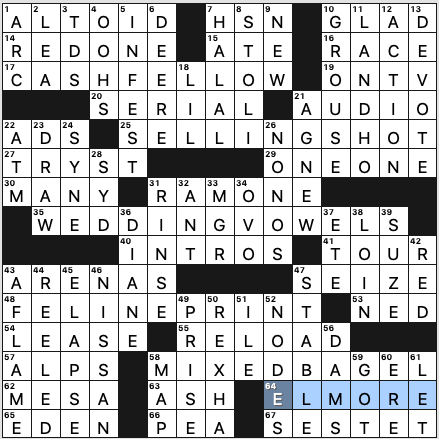 I liked these fine. Nothing tickled me especially, but nothing induced a groan, either. So, steady as she goes, eh?

The fill doesn’t feature any stellar entries though. Note the two sets of blocks on the right and left sides and how they all extend into the fourth columns from the sides, thus preventing any long Downs. In fact, apart from the theme entries, there are no entries longer than six letters, and 23 three-letter entries is on the high side. Five long theme entries plus a revealer limit what one can achieve in a grid, but still, much of the fun in the solve—after the theme—is uncovering a fresh, juicy long entry.

Did not know pop singer Bebe REXHA and I had to check and recheck that entry multiple times. I’m grateful for fair crossings.

Decent theme. Would have liked to see the fill shine a little bit more. 3.25 stars. 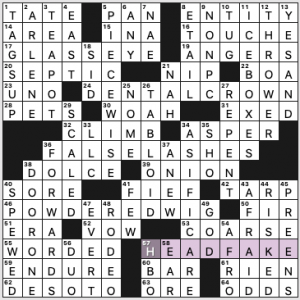 I had to ask my husband to demonstrate a HEAD FAKE, which is today’s revealer, and then I looked up a definition. The clue doesn’t tell you much if you don’t know your sports terminology:

Fun theme, and I like the assortment of themers.

What else? My fave fill is ICEBOXES (the outside of my kitchen has a circa 1920s ice block door, long since painted shut, TABLOID, Let’s Make a Deal‘s DOOR ONE. Hardest fill: 5d. [Like a mathematical function that changes at different intervals], PIECEWISE. I reckon fewer than 5% of solvers read the clue and dropped that answer in.

Did not know: 62a. Alliterative “Doctor” of children’s literature], DE SOTO. DOLITTLE wouldn’t fit. Apparently Doctor De Soto is a William Steig tale about a mouse dentist to the animals, and you can have it read to you here.

Signing off to catch up on some email. Four stars from me.

Theme: Each theme answer contains a word that ends with an M, followed by a word that begins with an N. Thus, in the grid, the MN (Minnesota’s postal code) is “united”. 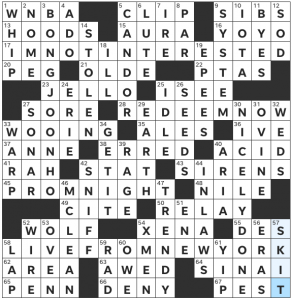 I was very excited when I read this puzzle’s title for three reasons: 1. I went to college in Minnesota and love the state, 2. I am a big major league soccer fan and immediately knew that the puzzle’s title, “Minnesota United” was a reference to their soccer team, and 3. This weekend I watched said Minnesota United lose to my hometown team, the Seattle Sounders! It was my first live sporting event since the start of the pandemic, and was a great game to attend (if a little boring, being a 1-0 result. But a Sounders win is a win!)

Anyways! I had high expectations for this puzzle, and it didn’t let me down. The theme answers are all super strong, well-known phrases (although I did kind of wish REDEEM NOW had something about coupons in its clue; I kept wanting the answer to be something along the lines of “add to cart”). BONG JOON HO and NICELY DONE sparkle, and the fill overall is very clean… but honestly, I’m gonna love any puzzle where 1-across is WNBA. Did anyone else feel like there were a lot of fill in the blank clues today? I haven’t counted to see if there are actually more than normal, but some (e.g. 1d [___ up some breakfast] for WHIP) felt a little gratuitous to me. 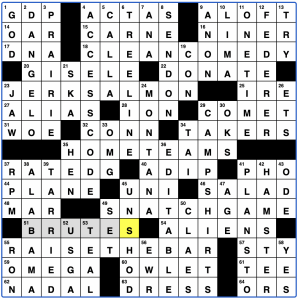 Stella Zawistowski has today’s AVCX puzzle, which is on the easier side at 2.5/5 difficulty.  There’s a nice AHA with the theme once you spot what’s going on:

You’d RAISE THE BAR, of course, because CLEAN, JERK, and SNATCH are all parts of weightlifting!

Speaking of raising the bar, here’s weightlifter Hidilyn Diaz scoring the first gold medal ever for the Philippines.

Other nice grid things: GISELE is of German-Brazilian origins, I’m mad about being earwormed with the “Kars 4 Kids” song merely from the word DONATE, OWLET, D’ANGELO’s “Black Messiah” album is fantastic, and CLAES Oldenburg, whose massive soft sculptures are always fun to see in a museum’s collection. 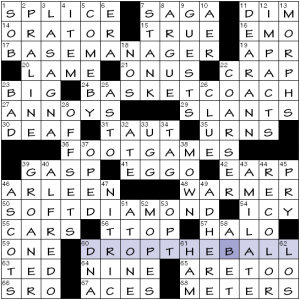 These aren’t particularly exciting or interesting. We have three of the ‘big four’ Unitedstatesian sports—all save ice hockey, so softball stepped up to the plate. Poor soccer. 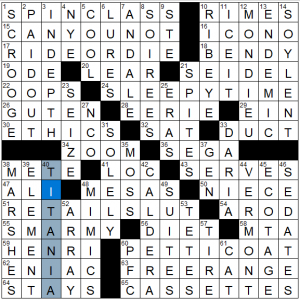 OK, I know I always call attention to the grid design (it’s the first thing you see!) but I knew I was in for a treat from Aimee Lucido as soon as I opened this one. So much connectivity!

And we start with a bang with that stack in the NW – SPIN CLASS (1a- SoulCycle offering), CAN YOU NOT (15a- “Quit it!”), and RIDE OR DIE (17a- Loyal to the extreme). Three super flavorful and in the language entries.

I enjoyed so much about this grid. For highlights, I think I’ve heard SEIDEL (21a- Large beer glass) before, but fun to learn/see it again during Oktoberfest season, a neat piece of quizzing for VERMONT (44d- State whose capital starts with its last four letters), and the juxtaposition of the *very* different disco and baroque (25d) to clue ERAS.

The southwest corner slowed me down a bit – RETAIL SLUT (51a- Los Angeles clothing store where Slash got his signature hat) was probably in my brain, but I used most of the (very fair, as always from Aimee) crossings to complete it. TITANIA (40d- Bottom lover?) had a marvelous clue that maybe would have tripped me up even more in a more indie-minded outlet. 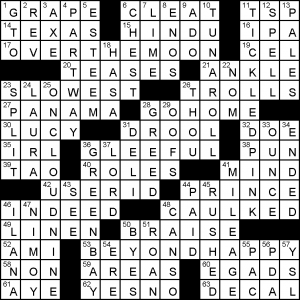 Today’s puzzle by Stephanie Lesser has a theme that sings its own praises. It includes five phrases meaning ECSTATIC: OVERTHEMOON, BEYONDHAPPY, ONCLOUDNINE, GLEEFUL and TICKLEDPINK.

The pinwheel theme design – two across, two down – with a bonus central seven, is one of the most balanced an usually allows for the least stressful grid filling for a constructor. In this case, there are also few medium length non-theme answers, the two longest being TUNAROLL and GREENBAY.