Hi all, Nate here! I missed blogging for Fiend, so I’ve hopped back on to start reviewing the Fireball puzzle each week. And what a week to start back up with it – a lovely puzzle with a fun “aha!” moment from two wunderkinds of CrossWorld, Ricky and Paolo. 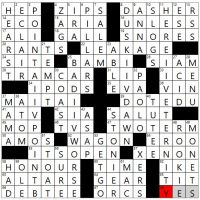 Each of the down theme answers has an “IIV” portion. At first, I thought this might be some tricky way to clue “to/two” via Roman numerals, but it’s even more straight forward than that: those are arrows pointing down, standing in for the word “to.” I also liked how some of the themers’ clues referenced directionality as a tie-in to the theme. I think I might be missing part of the why for arrows instead of “to,” but the puzzle was fun to solve all the same. Comment below if I’ve missed any key bits of the theme!

Favorite clues:
8A: DASHER [Dancer’s coworker] – I loved the need to think outside the box on this one.
45A: MOP [Wipe the poop clean] – “the poop” as in the poop deck – I bet parents of young kids read this differently!
62A: IKE [Good name for a Cockney quarterback?] – This induced the good kind of groan.
30D: COAST [Thing that’s literally littoral] – Nice!
48D: ROOKIE [Strawberry without much seasoning, e.g.] – I’m assuming this refers to Darryl Strawberry, but I enjoyed the angle either way.

Of note: SLOGS clued as [Extra-hard crosswords, to some] felt like a bit of a bummer clue, especially as a clue for a Fireball puzzle!

The first thing you notice with the grid is the groups of circled letters shaped like Less-Than Signs. I wasn’t quite sure how these related to the title, but it’s clear the top half of each Less-Than Sign is 90º off from the bottom half.

That should have set me up for an aha moment when I encountered the first theme clue. Instead, I believe I gave an audible “Wha?” But the aha came shortly thereafter as it became evident that each theme answer was actually two; they share the beginning part and then split towards the end. The final revealer spells it out: SPLIT ENDS (55a, [Hairy issue, or a hint to 20-, 26- and 51-Across]). 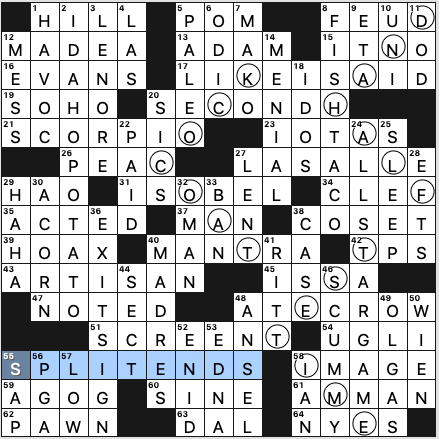 What a fun theme. I liked it so much I wanted more. I’m guessing there are enough potential entries that one could’ve made this theme into a 21x grid. Therefore, I’m assigning you some homework. Come up with some potential additional theme entries that match the pattern here. The entries should consist of two separate phrases or compound words that obviously share the same first word. The second words need to start with the same letter and be the same length. Avoid plurals if possible and added suffixes like -ED or -ING unless they make sense. I’ll start with HEAD HONCHO and HEAD HUNTER. Proper names would work, too, like MARTIN SHEEN and MARTIN SHORT. (Note that I’m not trying to steal the idea and make my own puzzle. Just wanted to have a bit of fun.)

Elsewhere, we have some stellar fill to enjoy like IDAHO POTATO, ALL-STAR GAME, FISH TACO, and EXIT SIGN, plus MANTRA, ARTISAN, SCORPIO, ATE CROW, explorer LA SALLE, SCUMMY, and “LIKE I SAID…” All this on top of the theme? More, please.

There are some prices to be paid for all that goodness, but amazingly, not that much. I had to double-check ISOBEL [Max’s sister on “Roswell, New Mexico”] which I keep wanting to pronounce with a long I and which looks like a scientific word meaning “equal sound” or some such. Another odd one is COSET [Subdivision in group theory] which seems pretty obscure. Crossing that with EFTS [Small salamanders] is not a fun time, but it is Thursday, and most of us have seen EFTS more than enough times to throw it in pretty quickly.

Clue of note: 61a. [City once called Philadelphia]. AMMAN, Jordan. Did not know this. It was founded in the 3rd century BC by Ptolemy II Philadelphus.

I’m going to overlook the less sparkly bits in the fill and chalk them up to constraints due to the outstanding theme and stellar longer fill. Five stars from me. 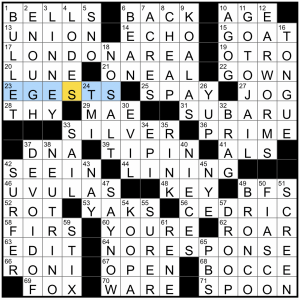 Kevin Patterson’s puzzle today has something going on at the edges of the grid:

All of these make more sense as answers once you put the word “silver” in front (SILVER BELLS, SILVER BACK, etc., all the way to SILVER SPOON), and indeed, 33A and 44A confirm we’ve got a SILVER / LINING (“With 44-Across, bit of consolation … or a feature of this puzzle’s grid?”).  Hooray, hooray.

a random assortment of other lovely fill: GOAT (as in Greatest Of All Time, like Simone Biles), LONDON AREA, SUBARU, UVULAS, NO RESPONSE, Laura LINNEY, GO TO JAIL, and DEVOID OF.

Theme: Each theme answer is a two word phrase where the first word starts with B and the second starts with E. 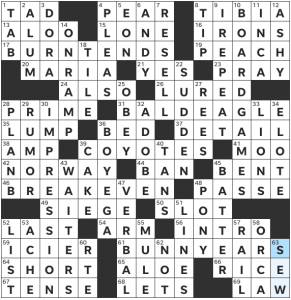 Solid, straightforward theme today. All of the theme answers are interesting, evocative phrases. I believe the USA Today crossword is based in Kansas City so referencing it in the BURNT ENDS clue felt appropriately meta. It took me a while to see BUNNY EARS despite them showing up in at least 50% of the photos my brother and I took in 2007 – I kept expecting it to be a pose or something the photo subject was doing themselves.

Each theme answer is only 9 letters long, so there is  lot of room for the grid to breathe. I don’t mind having a little less theme material when it allows the rest of the grid to stand out, and BOARD GAMES, IMPRESSION, I REPEAT, and BOYEGA were all highlights today (side note, I have never heard of the game Wingspan, is it good? Should I try it, as a board game fan?) I appreciate that the grid is exceptionally clean while having very few three letter words, which meant that I could move through answers very smoothly as a solver.

Theme: Each theme answer replaces the T in a common phrase with an X, essentially messing with TX, a play on the phrase “Don’t Mess with Texas.” 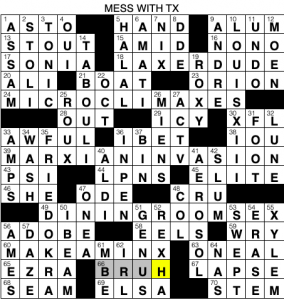 As always, BEQ has something up his sleeve in his wordplay. My favorite of these was MARXIAN INVASION as an X-replacement for MARTIAN INVASION, which I thought was particularly clever. On the other hand, I felt like “Not as uptight feller” wasn’t clued as tightly as it could have been, as “Less uptight feller” would’ve been cleaner. “Feller” also threw me off for a long while since it feels contextually different than “dude.” That might be splitting hairs, but I was shocked when I got DUDE on the crosses.

I thought that the references to folks like ALI Hassen (20a [“Comedian Hassan”]), SONIA Manzano (17a [“‘Sesame Street’ actress Manzano”]), Shaquille O’NEAL (63a [“NBA legend who hosts ‘The Big Podcast’”]), EZRA Sosa (65a [“‘Dancing with the Stars’ dancer Sosa”]), and 64d Lil NAS X. It was a nice range of folks, and the inclusion of EZRA was especially timely, given that he was just added to the DWTS cast.

Other Clues of Note:

That’s all from me for today! See ya next time! 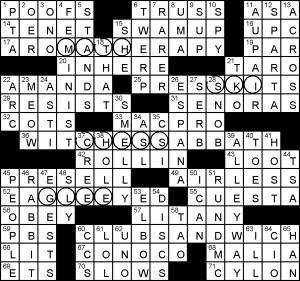 Today’s puzzle by Jeff Eddings features a fairly simple theme concept, but one that, without circles, may slip by those who aren’t looking out for it. The revealer is CLUBSANDWICH, a sandwich whose precise features seem quite nebulous, and each of four entries have a word that satisfies “___ CLUB” somewhere in their middle. All four of these clubs are kind of similar: MATH, SKI, CHESS and GLEE; I myself have just come back from the cricket club. Note: the puzzle is sixteen squares wide to accommodate a twelve-letter revealer better. 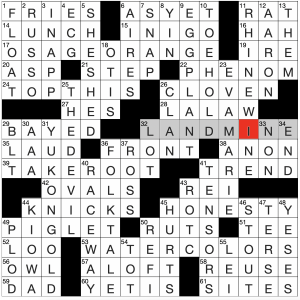 Not my favorite of Paul’s, though it is a remarkably tightly conceived theme. Not sure why it didn’t sit right with me. Perhaps because I didn’t know two of the themers at all (OSAGE ORANGE and RHINE WINE)? That doesn’t usually bother me though. Maybe WINE as a paint color isn’t all that familiar to me? Is it similar in tint to EGGPLANT? I dunno.

Besides two of the themers, some other new and fun I learned  were:

Enjoyed SHE SHED too! My girlfriend just got the equivalent of one that we’re calling “The Art Barn” and it’s so very cool.