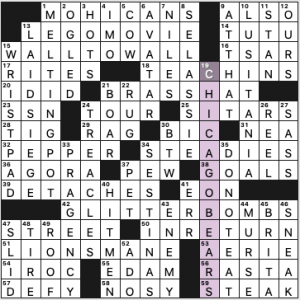 This 70-worder is mighty smooth! Oh, hey—just realized it doesn’t have standard rotational symmetry but instead mirrors across the NW-to-SE diagonal. Cool.

Fave fill: LEGO MOVIE (everything is awesome), WALL-TO-WALL clued as [Jam-packed], GLITTER BOMBS, MELTING POT, the SELASSIE/RASTA pairing, and the classic “DO NOT EAT” of a desiccant packet. And, of course, the CHICAGO BEARS, ridiculously clued by way of [Team whose song “The Super Bowl Shuffle” earned a Grammy nomination] because, honestly, the Bears haven’t done many impressive things since that 1985 season.

Did not know: 51a. [Monkey head mushroom, by another name], LION’S MANE. I have so little interest in mushrooms. I did just wonder about the etymology of the word, though! And it’s weird.

Each theme answer in today’s grid is DOUBLE-SIDED (38a, [Like some tape … and each starred clue’s answer, based on its first and last two letters?]), that is, each one starts and ends with doubled letters. 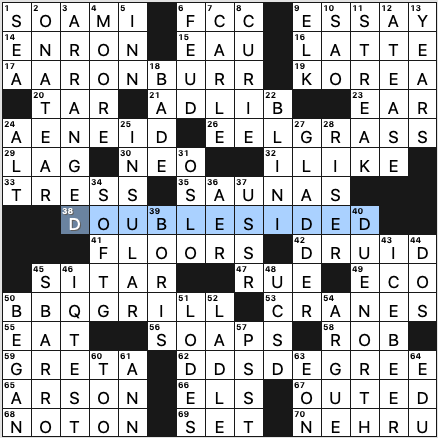 It’s a nice theme, I just wish there were more entries like the first two. Relying on abbreviations feels a little bit like a cheat, but in reality, there can’t be that many phrases that have this feature, so the entries with abbreviations were probably inevitable.

The fill doesn’t wow, but it’s clean and gets the job done. The SE corner is nicest with DUE NORTH and ICE BEER.

Clean puzzle with a gettable theme and fun clues. 3.5 stars. 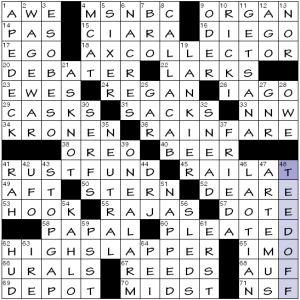 It’s a fine theme. So, does ‘tee off’ extend idiomatically from golf and baseball, or is it derived as an initialed form of the ‘annoying’ sense of tick off?

That’s all I’ve got on this rushed morning. Good crossword with a few easily avoidable dings.

Theme: Each themed answer in this puzzle is two words, with the first composed of ten letters and the second of four, making each one a “ten-four.” 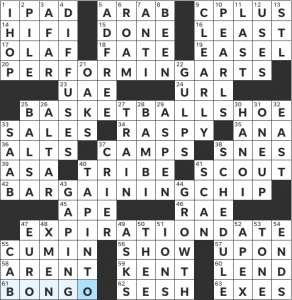 I thought this was a neat theme! The theme answers were each very different (like every good theater kid, I got 20a right off the bat). As I’ve been slowly dipping my toe into constructing water, I’ve been thinking a lot about word lengths, and so I thought that this was also a nice pull back of the curtain because it drew specific attention to individual word count in the theme, even if it wasn’t referring to the total of fourteen letters in each themer.

The grid design on this was also really nice! I lowkey love seeing the diagonal zig-zag in the middle of a puzzle, and I thought Nate’s cluing was spot-on, especially in answers like 27d [“Part of a wedding dress”] TRAIN right after 26d [“Place to exchange vows”] ALTAR. It was a perfect excuse to clue TRAIN this way rather than as a mode of transport or within an educational context for that nice matrimonial one-two punch. I felt similarly about the trio of 21d [“Acorn sources”] OAKS, 28d [“Disney deer”] BAMBI, and 29a [“Colorado town named for a tree”] ASPEN. While OAKS were clued explicitly as trees, I loved that ASPEN referenced the town through its tree name, making it a close echo with an additional fact.

Other Friday faves include:

Good morning folks! I wrote this post while listening to Leon Bridge’s tiny desk concert, which is a stunning set of music. Feel free to listen while you read.

Over the last few months of solving / reviewing The New Yorker’s puzzles, I’ve found that I am not really on Patrick Berry’s wavelength, especially in comparison to the other constructors on their roster. (I think I vibe with Anna Shechtman the most.) Obviously this does not mean his puzzles are bad (he’s a legend lol), just that I flounder a lot while solving. A typical Friday New Yorker takes me about seven minutes; today’s took me seventeen. 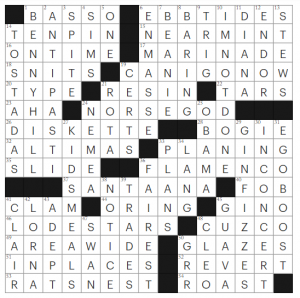 A lot of the entries were just totally outside my frame of reference: Cars (ALTIMAS: Midsize Nissan models) and American football (GINO Marchetti in the Pro Football Hall of Fame) and BENNY HILL (British comedian whose TV show usually ended in a high speed car chase) and Star Wars (ENDOR) and ballet (SWAN: Odette’s form after Rothbart’s magic spell, in a Tchaikovsky ballet). The entry / clue pairing of BOGIE (Bacall’s onscreen and offscreen love, familiarly) meant truly nothing to me, even once I had all the letters in.

But I’m okay with not knowing trivia in puzzles. Sometimes, that’s just how the cookie crumbles. My main problem was that many of the longer entries felt dull. When I make themeless puzzles, I want the first long across answer to really dazzle solvers. EBB TIDES (Backflows at the beach) did nothing for me, and AREA WIDE (How weather warnings might be broadcast) and IN PLACES (Here and there) felt similarly meh.

The good stuff was mainly in the downs: entries like KIDS MEALS (Menu options at McDonald’s and Burger King, but not Taco Bell), TOSTADAS (Small, round Mexican snacks), and EGO BOOST (One giving you a lift?). I liked the entry GIN FIZZES, but the clue bugged me, because the majority are not served in Old Fashioned (or rocks) glasses, they’re served in highball glasses, as you can see on Google images.

I’ll close with the truly spectacular clue [Evening in one’s workshop?] for PLANING. I said “Nice!” aloud to myself when I got that one. 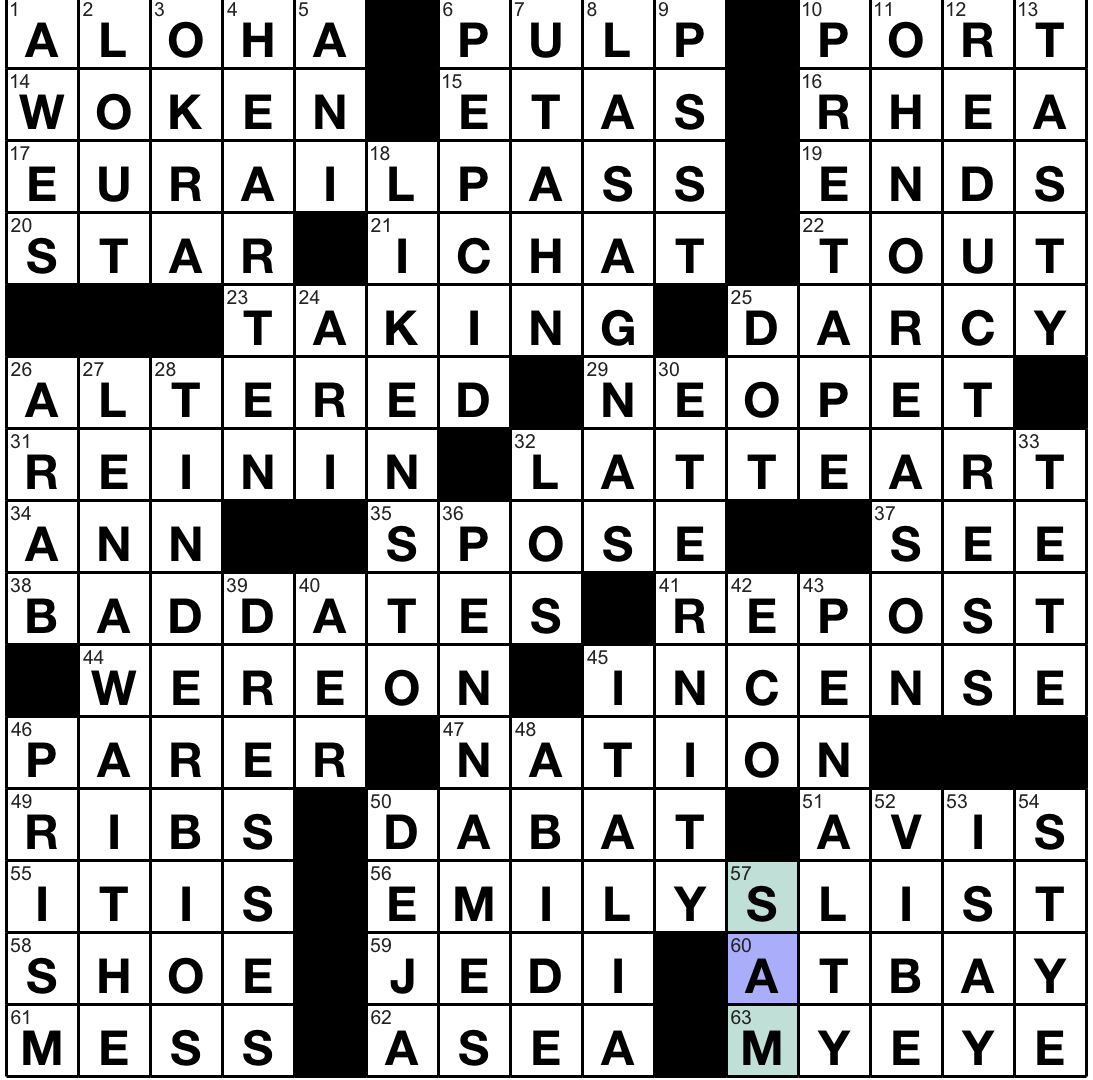 I really VIBEd with this puzzle – clean and lots of fun. For me, enjoyment of a themeless puzzles are so dependent on the author and I loved this one.

The long answers really hit it out of the park. REDUCTRESS, EMILY’S LIST, and LENA WAITHE were all gimmes, which helped this be a speedy solve for me. Really all the 10s in this grid were fantastic.

8s were great too with LATTE ART, PEN NAMES, and BAD DATES making the center of the grid sing. Not to mention how appropriate it is that BAD DATES crosses TINDER BIOS.

I also enjoyed the talky aspects of this puzzle with WE’RE ON and OH NO REASON.

58-Across [Makeshift flyswatter, perhaps] for SHOE – only partially influenced by the mosquito I finally vanquished.

7-Down [Jazz fan, maybe] for UTAHN – I know Jazz and Utah related things are clued together more often than not, but I get a kick out of it every single time.

49-Across [Components of a cage] for RIBS

I’m off to check on my long-neglected NEOPETs – I’ll leave you with this recent REDUCTRESS post. 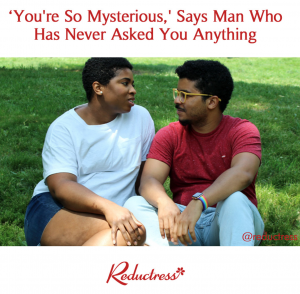