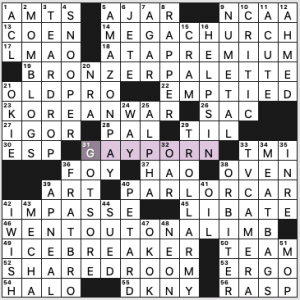 The other showy entries include MEGACHURCH, a BRONZER PALETTE, WENT OUT ON A LIMB, ICEBREAKER, MOM BLOGS (I guess they evolved from mommy blogs as the kids outgrew saying “mommy”?), AMAZON PAY, TROLL ARMY, NUMETAL (man oh man, I needed so many crossings because [Genre popularized by Limp Bizkit and Korn] is just not for me, and I think maybe it needs an umlaut?), and MEATBAGS (if your own particular meatbag isn’t giving you much trouble, do remember to thank it for carrying you around).

Wasn’t wild about the shorter fill, which included IN RE, AGAR, and a bunch of abbrevs. The price you pay, typically, for getting those wide-open chunks in the grid. Also furrowed my brow at GOT SORE and LIBATE. 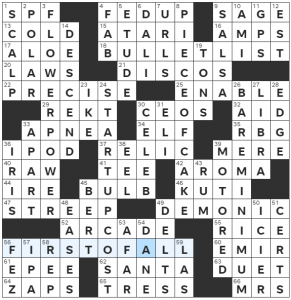 It took me a minute post solve as well as a close look at the title to find the theme, but it’s a great set:

The first word of each themer has a hidden word at the beginning: FLOW, STAR, PIE, and BAR are all types of charts, as hinted by the title. Really elegant theme set in its consistency. Pseudo-themers BULLET LIST (18a- Formatted series of points) and FIRST OF ALL (56a- “Before I say anything else…”) are assets to the fill, as well. 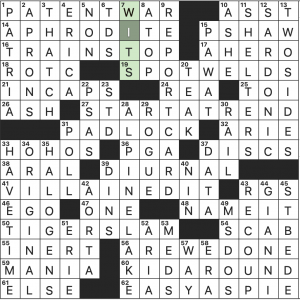 Long time Stumper creator Matthew Sewell has today’s LAT Saturday challenge puzzle. Not quite as tough as a Stumper, that’s for sure. I usually move my cursor to 1-Across for the grid image, but you can see where I finished this puzzle: right where I started! Yes, I start at the beginning, but I noticed on one of the Boswords live solves that one solver purposely started in the lower left corner, with the assumption that the constructor would have been more constrained to fill that part since there are likely seed entries in the upper half of the grid. Interesting theory; maybe I will try it someday. (if I remember!) But for now, my old tried and true method still functioned. 4.5 stars from me.

It is still nice weather, so I think I will go for a bike ride! Keep puzzling! 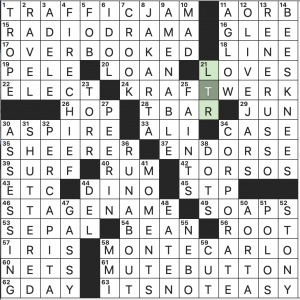 I do have access to these puzzles early, for blogging purposes. So I often try them in an evening, and I started this puzzle late on Friday night, and was a little stumped. Once I slept a bit and looked at it fresh, it fell fairly easily. Perhaps I should tackle these during the week in the morning! Nice puzzle by Greg this week, though. Nothing too difficult, but still enough misdirection to give anybody fits. I have one small nit to pick: the clue for 1-Down contains the word “dramatists,” and the answer for 15-Across contains the word DRAMA. I thought that was what it might be, but I kinda thought it would NOT be since it is basically a repeated word, albeit in a slightly different form. Am I being too nitpicky? I hope not. That is my only negative comment regarding a stellar puzzle. Still a solid 4.4 stars from me.

A decidedly wonderful groaner of a title/revealer.

THEME: The letter strain NME can be found within common phrases. 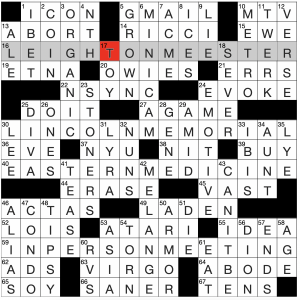 I was looking for FOE or something of that nature to be hidden within the phrases, based on the title. When the first theme clue asked solvers to notice three letters within each of the starred entries all I noticed post-solve was that they had NME in common, which spells… MEN? That doesn’t make sense. I had a good chuckle in spite of myself when I figured out that… duh… NME is the EN-EM-Y within.

Needed every cross for LEIGHTON MEESTER, but fun enough and fair enough to uncover. MELANGE was an interesting word in there. Not sure if that was in my vocabulary somewhere or not prior to this puzzle. My only NIT is the odd clue for AUNT… [Mother’s sister, say]. Is the “say” part necessary? Oh wait, I see… it’s just to differentiate from the clue for NUNS [Mothers or sisters]. Nah. I still don’t think the “say” part was necessary. I like to save the “,say” “,perhaps” and “,maybe”s in clues for when they’re absolutely necessary.

Clever puzzle, even though I didn’t see the theme until very late. 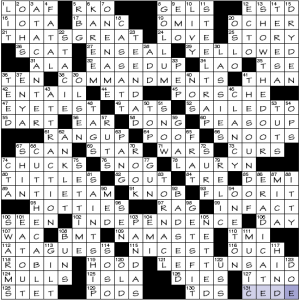 Top moneymaking movies from various years. When entered in the grid, they plow through a black square, sometimes called a ‘block’. The second part is clued separately.

The most impressive aspect of this puzzle is finding two-part entries that break evenly to be placed symmetrically. Certainly, the list of top-grossing films by year comprises more than a hundred, but to pair them, get them in the crossword, and still have a smooth grid?

Not exactly pc; of its time.