The byline for this puzzle wasn’t familiar to me, so I looked for previous grids by this constructor. I found one all the way back in 2011 in the Chronicle of Higher Education. That’s a healthy gap between publications!

This puzzle uses the gas ARGON as a basis for removing letters R from various words and coupling the R-less words with their original forms. The revealer’s clue is [About 1% of Earth’s atmosphere, and a phonetic hint to this puzzle’s gimmick]. Get it? R gone? Maybe this would be a good puzzle for the day after Talk Like a Pirate Day. Oh hey! Whaddya know. Talk Like a Pirate Day was only a few days ago on Sep 19th…and I missed it. *sad emoji* 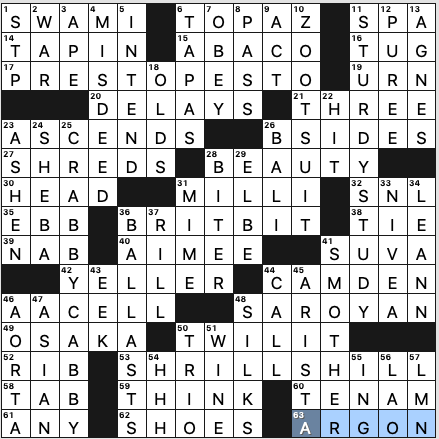 Fairly straightforward and easy to grasp. It only took one entry to figure out what was going on, so that certainly helped fill in the remaining theme entries.

What I struggled with was some of the fill, most especially the pile-up of proper names in the eastern section: SUVA, CAMDEN, and SAROYAN, all crossing NIVEA. At least the other proper name in the mix, LEANN (Rimes) was easy to fill in, but no doubt that was a tough section. Elsewhere the crossing of AIMEE (not Mann, by the way) and the river ELBE required a guess, and lastly we have ABACO Islands, which I’d never heard of. That’s a lot of proper names and geography in one grid. It wouldn’t be so bad if there wasn’t so much crossing going on. HHH and LMN are other bits of less likable fill.

I do like ZOOT SUIT, of course, and starting the grid off with SWAMI is a nice touch.

The theme is light and easy to grok which puts it at odds with the thorny fill and some opaque cluing here and there. The end result is that it feels unbalanced. 3.25 stars. 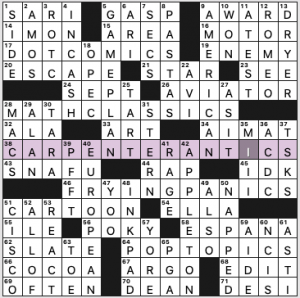 I enjoyed this breezy puzzle and it played more like a Tuesday than a Wednesday—but then, I’m good at names, and this puzzle looks to have just enough proper nouns to (a) please me and (b) annoy that other contingent of “I just want dictionary words, please” solvers.

The themers add -ICS to familiar phrases to change their meaning, with a goofball clue to match:

I liked the fill, and the AMERICAN/EUROPEAN clue pair is neat. Also liked the coach’s GAME PLAN and APPLETON, Wisconsin, where I visited when my sister-in-law graduated from Lawrence. Feel like we don’t much see 45a. [“Beats me,” in textspeak], IDK, in crosswords, but I don’t mind it a bit. (idk = I don’t know.)

That’s it from me for tonight. A solid four stars, an enjoyable Wednesday outing.

Theme: Each theme answer ends with a salsa spiciness level. Each successive answer also literally “dips” lower in the puzzle. 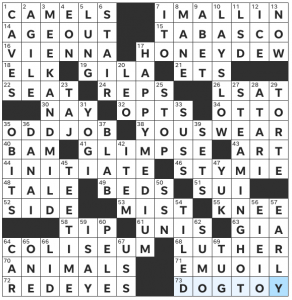 This is basically a food theme, so I’M ALL IN for it. I wasn’t sure whether the puzzle’s title would refer to dancing or sauce when I first started out, which was a nice bit of misdirection. The first two themers are great, but the last one doesn’t ring as true for me – I kept wanting “piping hot” over STEAMING HOT. I did however enjoy the inclusion of TABASCO in the fill as a bonus condiment.

Because the theme answers were on the downs, there are a fair amount of midlength acrosses today that add some interest to the fill. I particularly liked ODD JOB, COLISEUM, and HONEYDEW, and the words GLIMPSE and STYMIE are fun as well. Does anyone actually call uniforms UNIS? Is EMU OIL a thing that has a use outside of crosswords? Who knows! The last part of the puzzle to drop for me was the middle right – As mentioned before, I didn’t see STEAMING, and not knowing OTTO or SUI didn’t help either. Thank goodness for TORTE helping it all fall into place. 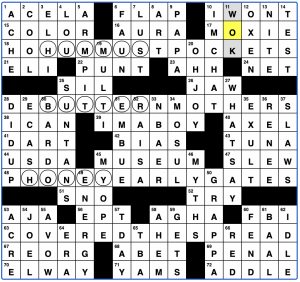 BEQ is up in the AVCX rotation, and he’s given us a nice 3/5 difficulty grid:

The AJA in this week’s puzzle is AJA “Métoyer of VH1’s “Basketball Wives” (whose first name is pronounced like the continent)”, but there’s always this AJA, too. 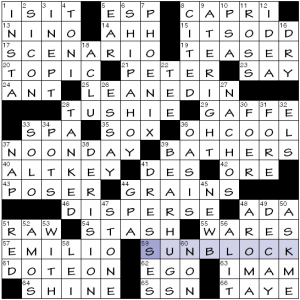 The revealer here is 59-across: [Beach trip essential, or any of three squares in this grid that affects the starred clues’ answers?] SUNBLOCK.

The execution on this is really well done. The two blocks in the corner each have only two entries terminating, while the one in the center has four seven-letter entries radiating from its location.

This seems the most appropriate choice, a cover of “Black Hole Sun”:

But also I can’t let a song with NOONDAY SUN in the lyric go by, especially when it’s crossed by 37d [Go out early?] NAP:

Overall, a nicely made crossword, and a last gasp for sunshine, as the local forecast is for a series of overcast days and a high likelihood for rain. 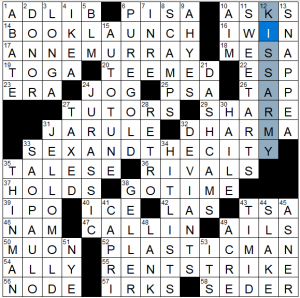 Breezy, well-connected themeless from Natan today that’s packed with neat stuff. SEX AND THE CITY (33a- Classic sitcom whose fans often categorize themselves as one of its four protagonists) runs through the middle, and really there’s just good stuff everywhere, stymieing my attempt at a narrative review.

The bottom half of this grid in particular is very in Natan’s voice, with ALLY (54a- Comrade in the fight for racial justice, say) and RENT STRIKE (55a- Collective action by a group of tenants) spanning a row, and (40a- “Abolish ___” (anti-deportation rallying cry)) cluing ICE slightly above.

Clues I liked: BOOK LAUNCH (14a- Novel marketing strategy?), NODE (56a- Point of a graph theory lecture?), DASHCAMS (21d- Producers of road movies?), and especially PISA (6a- Its biggest attraction is on a list) 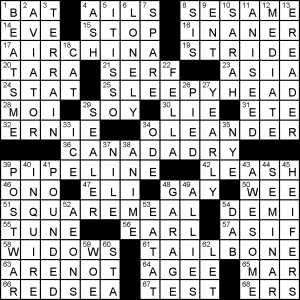