The central revealer is TOUGH NUT TO CRACK (39a, [Challenging poser…that rows 3, 5, 11 and 13 have broken]). In those rows you’ll find synonyms of “puzzle” broken up across multiple entries. 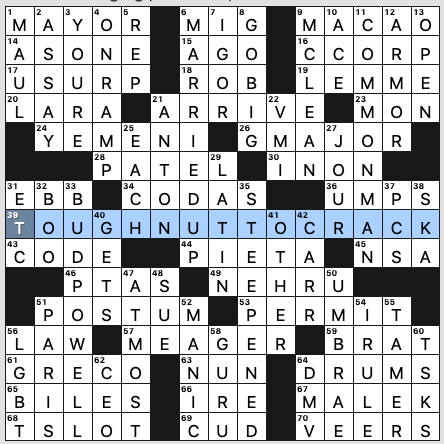 Without any long Across entries, this started out solving like a themeless. Once I hit the revealer I took a moment to go back to the first two themed rows, found PROBLEM and ENIGMA, then proceeded to ignore the theme the rest of the way. Maybe if I hadn’t, that would have helped me with POSTUM [Beverage powder marketed as a coffee alternative], which I’d never heard of before. But I only went back and found STUMPER and CONUNDRUM post-solve.

I guess the idea here is that the theme words are broken up because we’ve “cracked” them? Hmm. Not sure. “Cracked” doesn’t usually imply broken up into pieces.

This type of theme—where a word is broken up into multiple entries—just doesn’t do much for me. It does the job of a theme by potentially helping a solver fill out the grid, but there’s just no liveliness to a theme entry that consists of three seemingly random entries.

In the fill I like MARRIED UP and COMMON MAN, but I didn’t recognize the name BUD POWELL [Miles Davis said he was “the best there was of all the bebop piano players”]. That’s definitely my own failing. I do of course know Don MCLEAN, “American Pie” singer.

I struggled in that NE corner with C CORP [Co. that pays income taxes], which is another new-to-me term and which, frankly, looks ungainly in the grid. With a little effort, I’d bet that corner could be cleaned up. (I know it can because I did it with MOCKS, CRONY, LEMON, and MRE. Sure, it trades MRE for C CORP, but that’s a trade I’d take any day.) 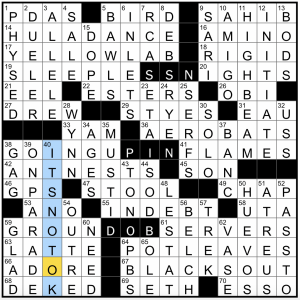 Keep what’s going on in Simeon Seigel’s NYT today confidential.  There’s three sets of squares with a “—” clue that ties in with its nearest neighbor in its row:

All of these need you to write on the black squares between the clues to make these make sense – there’s SLEEPLESS NIGHTS, GOING UP IN FLAMES, and GROUND OBSERVERS, all of which have a trigram that represents private info that one BLACKS OUT when redacting sensitive info on documents (67A, “Redacts, as sensitive information (suggested by three of this puzzle’s answers)”), like your SSN, PIN, and DOB.

Here’s some more info on the art and story of HULA DANCE.

in other lovely fill: YELLOW LAB (“Marley of “Marley & Me,” for one”), AEROBATS, ANT NESTS, HIGHBEAM, ON PARADE, and HUEVOS

Nate here, putting aside a stack of tests for the moment to tackle this week’s Fireball Crossword. I hope the week is treating you well! 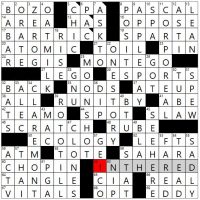 Each of the theme entries is matter-of-factly defined by its clue, but is contained in the grid by a shade of red – in that way, each theme answer is literally IN THE RED. This scratches my cryptic crossword itch of words containing other words, so it was a fun aha moment to reveal. I also like how the title ties in with the revealer (on its surface sense) but wonder if there’s an alternate title that might hint at the word-within-a-word mechanic going on. Either way, an enjoyable solve.

Random notes:
– I absolutely sang the full chorus in my head until I got to MONTEGO at 25A. Same thing with “The Hokey Pokey” to get ALL at 38A.
– I wonder if the color RUBY in 39A is related at all to the word RUBE at 48A.
– I enjoyed the modern touches of ESPORTS and APPLE PAY, and will never be mad at a clue referencing Tatiana Maslany from “Orphan Black.”

Okay, back to my grading. Let me know in the comments how this puzzle treated you. Be well!

THEME: Common phrases reimagined as if they have to do with stage presentations, resulting in absurdity. 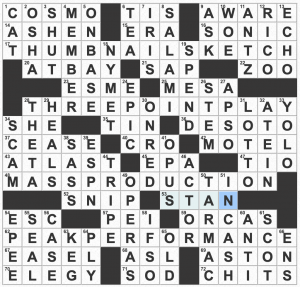 This is a very good set. Tight concept and all were interesting to uncover. Most impressively the words SKETCH, PLAY, PRODUCTION, and PERFORMANCE all change meaning from the base phrase to the resulting absurd phrase. So do the first words more or less. Excellent!

If I’m being honest about the fill, nothing really stood out. It was mostly mindless for me to fill in, pausing to enjoy the clue for TRIPE [Baloney, or a meat dish] and scowling at the highly inaccurate clue for SASS [Typical teen’s talk]. I deal with teens all day every day. Hundreds of them. From all walks of life. Very rarely do they SASS, especially if you talk to them as if they’re real people.

Theme: The word “crook” is found on the outside of each theme answer. 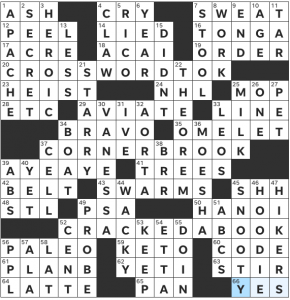 My favorite part of the puzzle is how perfectly the title sums up the theme – the outside of the words are literally “liars” (crooks). Figuring out what was going on was very satisfying for me (and also very important, because I very nearly got stuck at the CORNER BROOK/MOESHA crossing). I’m impressed that Erik found three legit phrases that all conform to this letter combination, and I appreciate that the letters in “crook” are split up a different way in each answer. I’m somewhat split on CROSSWORDTOK as an answer – it’s certainly fun and fresh, but it might play a little inside baseball to folks not as familiar with the crossword community.

I don’t have much to say about the rest of the grid today, other than that it felt very segmented to me. Each of the corners was pretty cut off from the rest of the puzzle, and there are not many long answers running from section to section that might help solvers break into a new area. I do like VANESSA, APACHE, and HOODIE, though, and the puzzle overall is very clean. 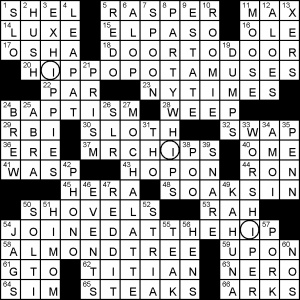 Before reaching the revealing answer of today’s puzzle, I found myself puzzled at the strange and rather janky longer answers. As it happens, those were theme answers in the almost symmetrical trio of HIP/HIP intersections signalled by JOINEDATTHEHIP. The first pair of themers were EXHIPPIES and HIPPOTAMUSES; as EX- answers go, that’s pretty arbitrary. The other three HIPs are PARTYWHIPS, MRCHIPS and a beige WORSHIPER.