I was actually just thinking about how I haven’t seen a Stella NYT in a while!! The last one of hers (link) absolutely s l a u g h t e r e d me (I believe I did not finish, and simply gave up), but I’m a better solver now so I wanted to see how I would fare. My first impression was that this grid is stunning. I care about Grid Aesthetics far more than I should, and that string of blocks down the center, and the stacks balanced with chonky corners…. simply lovely. 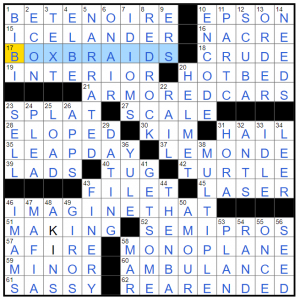 My first entry was BOX BRAIDS (17A: Black hairstyle with square-shaped sections), which I put in cackling because I just tweeted about this as a crossword entry. I thought the clue was far too easy / teach-y, fwiw, but glad to see it! Other no-crossings easy gets for me were KIM Possible (30A) and…. despite knowing zero French, LE MONDE (37A: Daily in Paris). This is because that newspaper was a plot point in the (incredible!) book Red White & Royal Blue which I just read. There were two other French terms in this, BETE NOIRE (1A: What’s not to like?) and AMOUR (50A: Affaire de couer). That’s a bit too many, I think.

I did not immediately know LOAD (25D: Important calculation for a weightlifter) but I know that Stella is a lifter, and I love when constructors inject themselves into the puzzle.

What else? The trickery of the clue “Grp. of Pelicans” (44D) for THE NBA didn’t feel very tricky because Pelicans was capitalized. To me, GET SOME (41D: Find satisfaction, slangily) means get laid. So it’s either a generational thing or that clue is pretty subtly risque. IMAGINE THAT (46A: “Well, there’s a surprise!”) was a simply delightful Weintraub-esque entry and “Dance around?” for HORA was lovely.

I don’t love random European vowel-y rivers (ELBE: River through Bohemia), I think Milton Friedman is a boring angle for ECON (2D), and Claude AKINS (48D) feels pretty irrelevant (actors from the sixties rarely hit for me), but no other complaints from me!

Very nice. I love the consistency here with all four-letter words and each word being split the same way. And the theme entries themselves are fun. Nice finds all around. 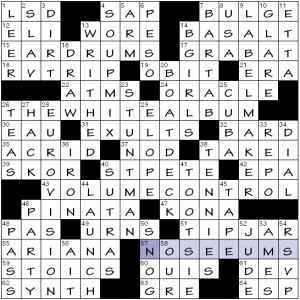 Was initially mystified by the theme, but I figured it out by the time I got to the third and final of the modified entries.

To be explicit, if you don’t see—or ignore—the UMs in the normal-seeming theme entries, you get the wackified answers to the clues.

I enjoyed the different spin to the theme of this crossword, with the in-grid entries seeming normal but mismatched to the clues.

First off, shout out to fellow Fiend Malaika on a great puzzle! This one was also edited by Erik Agard.

Theme: Each themed answer includes a way of hitting a ball in volleyball as the “final” word in the answer, ordered moving down so you move BUMP, SET, and SPIKE. 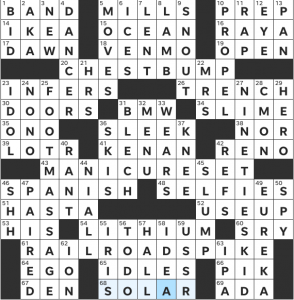 This was such a EUREKA-inducing Friday theme. Filling in CHEST BUMP and finding that it was the correct answer was an unexpectedly satisfying feeling. I wish that I’d put the theme together sooner, as I’m sure it would’ve helped me with the SET half of MANICURE SET, and I caught much of RAILROAD SPIKE on the crosses, filling in the vowels as it became clearer. It was a nice mix of creative cluing and rare (if ever used??) answer that could easily be filled in using the down answers.

I also thought that 25d [“Part of a pedi”] FOOT MASSAGE was a nice complement to MANICURE SET, bringing in a nice 11-letter answer. The other 11-letter column was NINETIES KID, which was clued as [“Person who still knows the Bagel Bites jingle by heart, perhaps”] in 27d. While I was a Totino’s Pizza Rolls child (so I tragically don’t remember the jingle), I thought that this was an incredible answer. NINETIES KIDS who watched KENAN and Kel, I think, will also appreciate 41a [“Thompson with a self-titled NBC sitcom”].

Other Friday faves include:

That’s it from me, folks. This will probably be the most fun item I’ll check off my TO DO list today, so it made for a solid start. 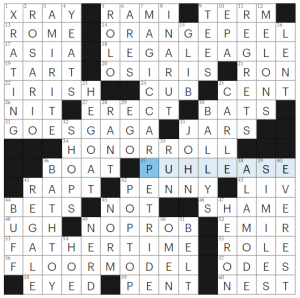 Good morning, solvers! I absolutely loved this puzzle from Caitlin. I was planning on doing highlights and lowlights but I can not find any lowlights. So, highlights below: