Good evening, solvers! This week’s Saturday puzzle was not for me. Sometimes when a puzzle is not for me, I just set it aside unfinished, like I do with books or movies that are not for me. *shrug* But today I am subbing in for our fearless leader, Amy, so I did my best. I probably had to Check Grid about four times, for reference, and finished in a zesty thirty-seven minutes.

What makes a puzzle Not For Malaika (TM)? Several things: 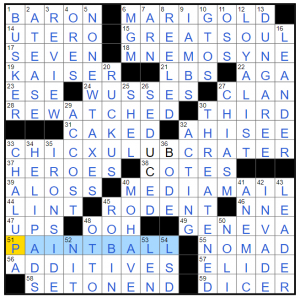 Very few of the long entries delighted me. MARIGOLD (6A: Flower that’s also the name of a “Downton Abbey” character), PAINTBALL (51A: Sport with a “capture the flag” variety), and CHALUPA (33D: Mexican dish named after a small boat) were nice, but the rest didn’t do it for me. I am certain there are people who think 1988s politics (5D: NO NEW TAXES) or 1960s television (35D: IRONSIDE) or geology (33A: CHICXULU CRATER) are fun to see; I just don’t happen to be one of them. Then there was stuff that seemed universally meh: REWATCHED (28A: Like favorite films, typically) is taking up nine whole boxes on the grid and half of that word is a prefix (RE) or a suffix (ED), plus it’s crossing REVIEW (3D: Run over)! THREATENED (30D: Like the red panda, blue whale, or black rhino) and SET ON END (58A: Turned vertically) and MEDIA MAIL (40A: Shipping option for books) also felt like some wasted real estate. (Although good job, no sarcasm, on keeping the clue for THREATENED from being something intimidating / scary. Endangered animals are sad, but much better than stalker-y or violent behavior in a clue.)

The short fill was rife with stuff I don’t know, like Latin (50A: NOLI me tangere) and spy novelists (53D: LEN Deighton) and sports agents (7D: ARN Tellem).

There were also cluing choices that I didn’t understand. THIRD (30A: Like Seth, among the offspring of Adam and Eve) is such a vague word, ripe with opportunity. You can do anything with THIRD! Elizabeth Olsen is the THIRD sister, “Eclipse” is the THIRD Twilight book, “I Am… Sasha Fierce” is the THIRD Beyonce album. I do not understand why, with the plethora of options at your fingertips, you’d go for Biblical trivia. Same thing with SEVEN… like, Russian telephone numbers? Really??

I’ll finish on a positive note, though. I found the clue for CHIASM (27D: Rhetorical inversion device seen in “Champagne for my real friends, and real pain for my sham friends”) to be very cute. I always smile when SHEL Silverstein (25D) is in a grid. Also, the misdirect on HEROES (37A: Long lunches?) was one I hadn’t seen before.

If today’s puzzle was in your wheelhouse, that rocks! Let me know your favorite parts in the comments. If you were like me, and pretty flail-y, join me in waiting patiently for the next Adam Aaronson puzzle. 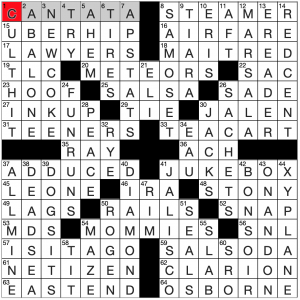 I am pretty sure I have done an Adrian Johnson puzzle or two in the past. This was a fun one! This particular grid does not have a lot of long answers, so that makes it a little easier to fill as far as some themeless grids go. But this still has plenty of lively entries to amuse the solver, while still not being too difficult to finish. Keep ’em coming, Adrian! 4.4 stars from me. 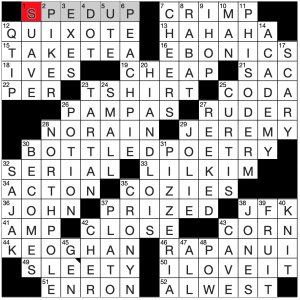 I almost got this one done in under 10 minutes, but the SE corner messed me up. Great central entry that I am sure had to be the seed entry in this construction. Nothing too overly hard in this one, as is the case with Anna Stiga (“Stan again”!) puzzles. But for some reason, I had all kinds of fits with that tiny SE corner. I had to put it down for a sec and come back to it just to finish! But that is OK, as I am always game for the challenge! 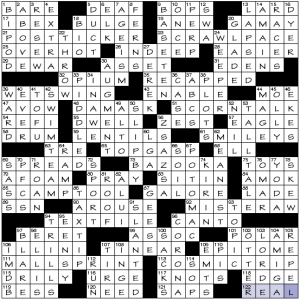 That’s the ess-hop, mind you. There’s an S in each theme answer, and it has a peripatetic streak.

That’s it, I think. Not detecting a deeper layer to the theme, which is certainly up to snuff, if a bit anodyne. I’d have been more impressed if all the answers resolved from two-word phrases to single words, as with potsticker, crawlspace, cornstalk, and stopgap—it’d make for a tighter theme and would also evoke (via the title) ‘mind the gap‘. Again, as with most of my theme improvement ideas, that’s a tall order.

THEME: The letters EZ are either added or to a common name/phrase.

I like the concept here. That was fun to figure out. I’m not totally in love with some of the base phrases / resulting answers. They feel a little forced without a strong payoff. Like BABYBEL and BREEZED PAST don’t strike me as very strong in-language bases. BAEZ DEGREE didn’t strike me as all that humorous, and I’m unsure as to why “earns” is in quotes.

Enjoyed the fill overall! New for me: Suni LEE, ABBI Jacobson. and SCHLOCK. That’s very fun to say in my head… SCHLOCK.

Thanks for this one, Paul! 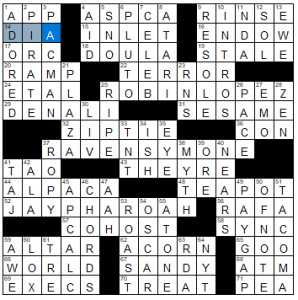 THEME: Three celebrities’ (“stars”) first names are species of birds (which can be found “in the sky”).