Hello! First up, a housekeeping note: Starting next Sunday, Nate will be back in the weekly blogging rotation (yay, Nate!) to cover the Sunday NYT each week, and I’ll pick up the (non-contest) Fireball puzzles. 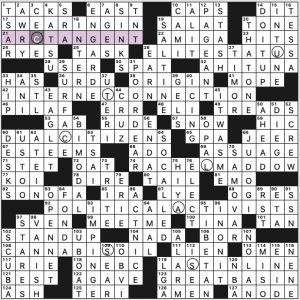 Priyanka and Matthew bring us a collegiate (or high school) academics theme, with circled letters amid otherwise unrelated entries “break”ing up various fields of “study” (hence the title). When you take all those circled letters together from top to bottom, they spell out CUT CLASS, which is exactly what those letters are doing in their themers:

Cute theme. Zero objection from me for using the shorthand words like calc and econ and chem, since you surely will find a great many college students who use the shorthand far more than the full words.

Puzzle seemed easier than usual to me. A wavelength thing, or did it go more quickly than you were expecting, too?

Fave fill: SWEARING IN (… depending on the year), the GREAT BASIN, POOR DEAR—not a lot of longer fill in the mix here, though.

Theme: Each themed answer finishes with a carbohydrate-heavy food. 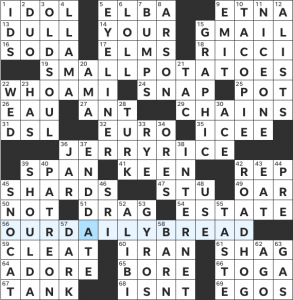 Creative Sunday theme here, with 2 13-letters taking the top and bottom thirds of the grids in SMALL POTATOES and OUR DAILY BREAD. Both of these were great, fun answers. For those unfamiliar with the Christian “Our Father,” I fought that the Down answers did the work to balance out OUR DAILY BREAD nicely. JERRY RICE felt especially apt, given that there will be much football today. (As always, go Bills!)

I thought that this was a friendly grid layout. It was very smooth sailing from start to finish with only a few skips as I started my way through the Across clues. 17a [“Trees with coarse-grained wood”] ELMS held me up, but once I got one letter, that was no problem, and now I’ll file that fact away in my mental tree folder (which is filled mostly with knowledge gained from puzzles). I wanted to fill 29a [“Groups of mountains or restaurants] with RANGES because that was what first came to find for mountains, but I quickly pivoted to CHAINS. I appreciated this clue because restaurants clearly put me in the right direction, and it was a good way to group the CHAINS.

Other clues that stood out to me included:

Overall, a solid Sunday puzzle! Have a great week!

About time SUPERCALIFRAGILISTICEXPIALIDOCIOUS was featured as a grid-spanner. Why did it take so long?!

The theme here is simple. A repeated letter strain within a phrase isn’t particularly groundbreaking. So the funkiness of the grid is what truly sets this puzzle apart from others. Evan is very lucky with the freedoms he has in comparison with limitations of other publications. And although SUPERCALIFRAGILISTICEXPIALIDOCIOUS was a gimme if I’ve ever seen one, I was not at all confident with the spelling of it, so I had to use a little fill/theme synergy to help me out there.

Part of me wonders if the theme was born out of the grid spanner. Reverse engineered in a sense. Like, did Evan examine that word and find a quality in it that he would likely be able to find in other phrases? While just fine, the other themers are not nearly as fun (that’s a very tall order though) or they seem repetitive like ALIGN ALIGNER and ALIVE ALIVE.

[Name spelled in midair?] IDA. The name is hiding in mIDAir.

[Match point?] RING. Boxing matches are played in RINGs. I had RINK first, which made sense to me as I thought it was referring to a hockey game (but I don’t think they’re ever referred to as “matches”).

[Date around?] CIRCA. Very clever. Date is a noun in this sense

CHE Noir and Rosamund Pike. Is that it? There’s usually more.

Love that BONNAROO is Creole slang for “a really good time.” That was fun to learn. 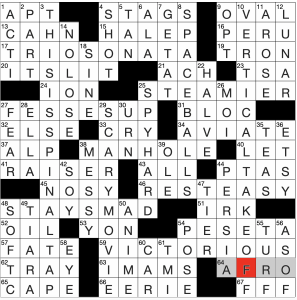 THIS IS SPINAL TAP.

I uncovered SPACEBALLS first (a movie I love despite having never seen any films in the Star Wars franchise). Then the revealer. That with the title had me believing for more than a few moments that the already-tight theme was taking it next level and all of the spoof movies were going to have to do with flight or space or something.

But no. Still, a fun little love note to the under appreciated spoof genre.

TRIO SONATA and VICTORIOUS are doing their level best to hide amongst the fill and not look as if they’re theme answers, but that’s a tall order being as they’re the same length as two of theme and they’re very much in standard theme territory.

New to me in fill: HALEP Simona.

Is LIT still a thing? It had a good run, but I think it’s gone into PHAT-land. Don’t hear it said much in the high school halls anymore. 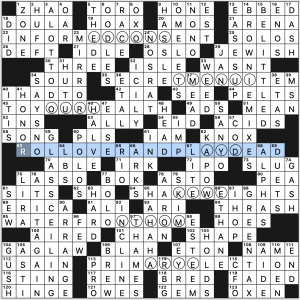 Very impressed with this set! Fun entries (well, SECRET MENU ITEM feels a little forced),  but I’m most impressed with the temporal progression from SECOND to YEAR. That’s an elegant touch I wasn’t expecting, but it elevates the theme tremendously.

I enjoyed the long fill as well with BROWNIE MIXES, GLASS CEILING, GREEN TAX, A LOT TO DO, AT IT AGAIN, and BELITTLED. Some of the proper names got me like actress Mireille ENOS, actress/writer Robin THEDE, chef Samin NOSRAT, and  director Chloé ZHAO, but I’m glad to learn them.

Clue of note: 101a. [Japanese honorific]. CHAN. I was only aware of SAN as an honorific. Here’s a good guide to all of them. Specifically, CHAN is used for people and animals one finds adorable and cute, like one’s children or pets.

Solidly constructed grid all around. Four stars from me.

I can’t think of SHAKE WEIGHTS without recalling the SNL parody commercial. NSFW. NBC tries to keep control of videos of its shows, so the link above goes to their site, but you have to sign in. Here’s a video someone made of the video. Apologies for the sound quality. 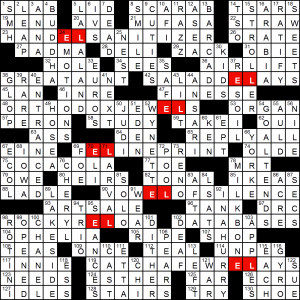 Today’s puzzle by Michael Lieberman features a pretty standard letter addition theme. I wondered if, given the title of “Elongation”, we’d have lengthened vowel sounds. Instead, the digram “el” is added to make answers with new, “wacky”, clues. I liked entries 1,3 and 7 the most: the bookending HANDELSANITIZER and CATCHAFEWRELAYS plus the scrabbly ORTHODOXJEWELS. The remaining were more functional: SALADDELAYS, FELINEPRINT and VOWELOFSILENCE; with only ROCKYRELOAD being grammatically strained.