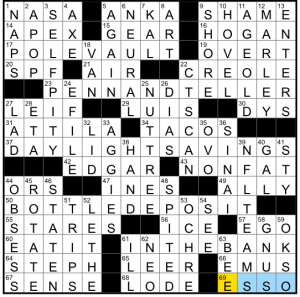 Theme: The final word of each of the theme phrases can also be banking-related.

A solid Monday theme today. The first two theme answers were my favorites, because aside from being fun phrases they also totally obscure the bank-related meaning of VAULT and TELLER. I didn’t realize until I got to DAYLIGHT SAVINGS what was going on at all, which gave me a fun aha moment! Didn’t help me much with puzzling out BOTTLE DEPOSIT, though – I kept wanting something more specifically soda-related as BOTTLE DEPOSIT can also refer to things like beer. Most of what I know about bottle deposits comes from my time in Massachusetts where a codified bottle deposit system exists – I’m not sure if I’ve ever heard it discussed in my home state of Washington. Did other people have this experience?

This grid is set up in an interesting way. I like the big corners in the northeast and southwest part of the puzzle, but they are very cut off from the rest of the grid – you’d only need one black square to completely close them off. This means that it can be hard for solvers to break into these areas. I didn’t get any of the northeast across answers on my first pass through the puzzle, solved the entire bottom half, and then had to jump back up to finish the giant amount of white space that was still there. The corners are very clean, though (well, except maybe for DYS). Favorite fill today was definitely SELF PITY, and I also liked the NEURAL network and Bob MARLEY references. 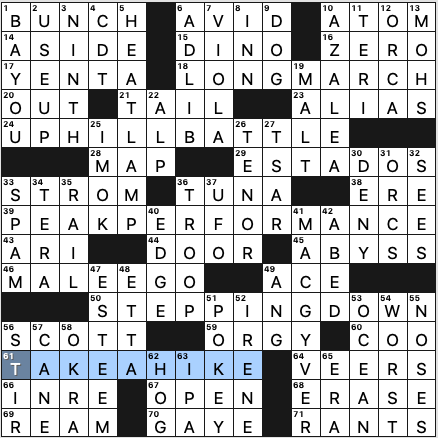 At first I was just looking at the final words of each phrase for some sort of sequence, but then I realized the phrases in their entirety were describing this hike. I like how most of the phrases change meaning to be more literal. The first one doesn’t really change meaning, and I wish there was another entry that could have been used in its place, but on the plus side, I was glad to learn of that event. 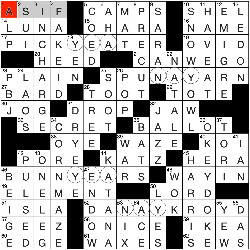 Time to cast your votes: Do you say YEA or NAY on this Monday puzzle? Actually, both! That’s because the theme, revealed in the center of the grid at 33- and 35-Across [Anonymous voting method, and a hint to each set of circled letters], SECRET BALLOT, tells us that there’s a YEA or a NAY hidden in each theme entry. Like so:

It’s a nice touch that each theme entry has YEA or NAY split across words, never hidden inside just one word.

Nice to see WAZE as a modern-feeling short entry in the grid, and although I know it’s trendy to clue Catherine O’HARA with reference to Schitt’s Creek these days, I, for one, am delighted to see her with reference to Best in Show, a movie that makes me laugh so hard it hurts. 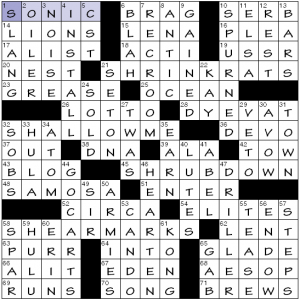 As the title implies, this is a simple additive theme. A voiceless palato-alveolar fricative [ ʃ ]—the sibilant sh-sound is affixed to the beginning of words and phrases. Further nudging is provided at the outset by 1-across: [Sound-related] SONIC. 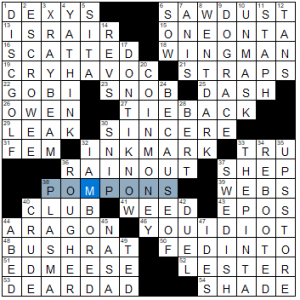 Well, how about this one, with relatively closed-off corners and a middle with few footholds. Makes for a toughie, and a relatively disjointed solve for me.

As much as I often highlight BEQ’s internet-isms and marquee answers pulled from the zeitgest and plopped into puzzles quicker than the Times could dream, this one displays one of his other calling cards: music. We’ve got DEXY’S (____ Midnight Runners (“Come On Eileen” band)) right off the bat at 1A, country star Jake OWEN in the NW corner as well (26A- “Beachin'” singer Jake), while SHEP (37A- Pettibone who co-wrote “Vogue” with Madonna) and LESTER (52A- Jazz trumpeter Bowie) in the southeast. Other than DEXY’S Midnight Runners, all were new to me.

Otherwise, not much about this stood out for me. I always get a chuckle out of ONEONTA (15a- New York city whose name supposedly means “place of open rocks”) Oswego, and the like for just how overrepresented New York cities are in puzzles, and I wonder how quickly they come to people who didn’t grow up in a town with a SUNY school. And I wonder in a close read how far back in time this puzzle would still fly: Jake OWEN‘s hit song was in 2014, and TRU Niagen was founded in 2015. I certainly don’t think every puzzle needs to have the latest trend in culture, but it’s odd to see an indie puzzle feel so out-of-time.

A handful of eye-raisers in this one for me: COIN MONEY (20d- Make a bundle), I AM BORED (32d- “Can we do something?”), and THE PINTA (33d- Martin Alonso Pinzon was its captain) each feel out of the language to my tongue. 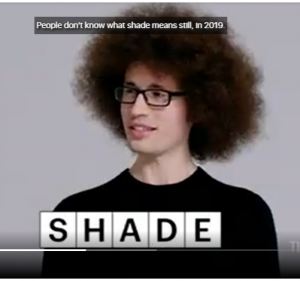 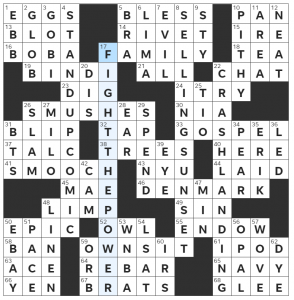 (This puzzle was edited by Amanda Rafkin.)

Hey solvers! I gasped when I opened this puzzle. I LOVE the grid pattern. I love love love big chunks of blocks like this– they look like tetris shapes kinda. A lot of publications don’t like them (not sure why– I guess they result in fewer words?), but USA Today is pretty lax with grid layouts.

Theme: The last word of each theme answer (which are running down in the grid) can come before the word “strip”

So much stuff I loved in here. What a delightful puzzle. Bullet points, to round them all up: 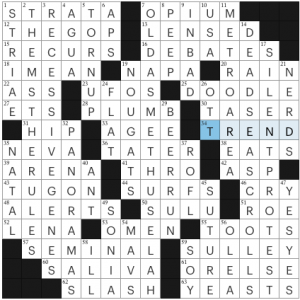 Sorry for getting to this on the late side. Overall, not as difficult as I was expecting for a Monday New Yorker themeless. I like the grid, anchored as it is by the 13- and 14-letter Downs. Neat to have the right and left sides so expansive, and feeding into the center section in four spots to promote smooth progress through the grid. And if you piece together that central 15, OLD AS METHUSELAH, it gives you a huge toehold.

Clue that stymied me for a while: [Three, in a saying], TREND. If you see two people wearing those weird goggles, it’s a coincidence. If you see three, it’s a bonafide TREND.

OLEA, the NEVA River, and THRO‘ felt a little gluey, but it’s a 68-worder so it’s not easy to avoid some paste.

Did not know: [Environmentalist Riki known for her talking-head expertise on oil spills], OTT. Nice to have an alternative to earlyish 1900s Mel Ott. Timely, too—Hurricane Ida brought about far too many oil leaks/spills in the Gulf of Mexico. Presumably Riki OTT has made the circuit of the various news shows I seldom watch.

Also didn’t know [Black Arts Movement poet Sanchez], SONIA. Here’s an amazing encomium to the great Ella Fitzgerald. Do yourself a favor, click through and read it. You can check out some of Sanchez’s other poems at that site.