Hi, all! Nate here, taking over the Sunday NYT puzzle review. Excited to be here!

Out of full disclosure, I should note that I’m lucky enough to be one of the NYT’s official crossword test solvers. We get PDFs of the puzzles a few weeks ahead of time, solve them, and get back to Everdeen and her crew with our thoughts. Because I solve the puzzles on paper for test solving, I’ll include an auto-filled version of the grid in my reviews since I’m not patient enough to resolve the puzzle on the app. 0:) I’ll be sure to base my review on the official version of the puzzle, though.

Trenton Charlson’s puzzle “Snoozefest” is our treat for this Sunday, and the gimmick becomes apparent quite quickly as we solve:

22A: FUZZY WUZZY [Inaptly named bear of a tongue twister]
28A: FREEZING DRIZZLE [Winter weather hazard]
45A: RAZZLE DAZZLE [Ostentatious display]
63A: ZIZZER-ZAZZER-ZUZZ [Final creature encountered in “Dr. Seuss’s ABC”]
86A: PRIZE PUZZLES [Opportunities to win a vacation on “Wheel of Fortune”]
101A: BUZZFEED QUIZZES [“Which Disney Princess Are You?” and the like]
111A: FORTY WINKS [Quick nap … or a playful description of the 64-Down here]
64D: ZEES [Sleep indicators]
(and a few other random entries that also include the letter Z, like ARROZ at 25A and JAZZ DUET at 12D, etc.) 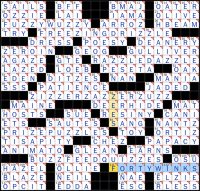 So, I’ll candidly admit that I’m of two minds on this puzzle. On one hand, it’s a lovely [Ostentatious display] to fit forty (I assume – I didn’t actually count) ZEES into the grid, and with stunning theme entries that evoke so much emotion and pizzazz. My favorite themers were easily BUZZFEED QUIZZES (I’m a Jasmine) and RAZZLE DAZZLE. On the other hand, the overall fill in the grid felt like it suffered as a result of all the ZEES… making this puzzle largely unfinishable for me. I was able to tackle the top and bottom 1/3s of the puzzle, but then got so worn out by a lot of the rougher fill that I didn’t have the PATIENCE to finish the middle 1/3. The EVZONE, YREKA, ALBENIZ, H BEAM section in the NE corner alone was one where I did a lot of head scratching. Was the juice worth the squeeze for this gimmick? I’m not fully sure.

I realize that folks’ mileage my vary on this puzzle, so I’m hopeful that this grid just caught me on an off day and that others found the grid/fill less gluey / more enjoyable than I did. Let me know in the comments below what you enjoyed most about it!

Some favorite entries / clues:
91A: [Actress Ana of “Love, Victor”] for ORTIZ – I liked the modern, LGBTQ+ inclusive reference!
15D: [“How to ___ a ___” (popular Google search)] for TIE – I loved puzzling over how the answer could fit both blanks, but it surely does.
89D: [Center of L.A., once] for SHAQ – What a lovely misdirect! I spent a minute or so trying to figure out where the most central town in LA would be, but not so!

THEME: Chess pieces can be found “broken” within common names/phrases. 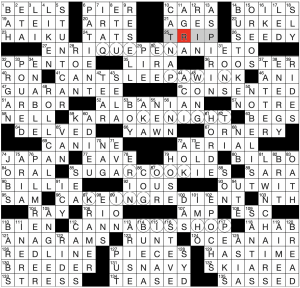 Very impressive, this idea. No surprise there. Always amazed at the added Birnholzian layer, that Evan can manage to use all the chess PIECES and get a feature of the puzzle to spell out an apt word that relates to the theme in two different ways (they are pieces in chess, and they are also “in pieces”). I sometimes wonder about the times when Evan inevitably stumbles on an idea, and no matter what, can’t get it to work. How much time is spent pursuing a dead-end path for a potentially great idea? We don’t get to see that dark side of constructing.

I love how the BISHOP is hiding in the CANNABIS SHOP. Everything about that is pretty great. And hey, the QUEEÑ has a little Spanish flair! That’s fun!

Mr. Happy Pencil didn’t instantly show face at the end, so I knew I had something wrong. And while I knew BUN TOKEN was awfully strange, I couldn’t find my mistake. Inexplicably had NEEDY for SEEDY and somehow refused to look over that clue when I was looking for my error. I dunno… I just figured a BUN TOKEN was something regional that went the wayside! Yeesh. BUS TOKEN makes a bit more sense, I’d say.

Theme entries are all 2-word phrases with the first word being a rough synonym of “removing.” Clues are simply the alphabet with the letters of the second word of each phrase removed. 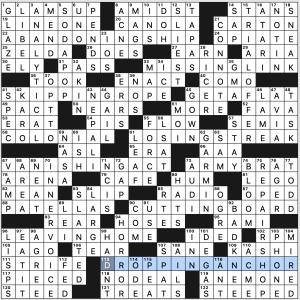 Hmm. Well, on the one hand, just having the letters of a word missing from an alphabet doesn’t really mean that word is missing. Any word spelled with those letters would seem to be a potential answer. For example, ABANDONING HIPS is just as valid an answer as ABANDONING SHIP.

But on the other hand, once I got the gimmick, I looked forward to trying to guess each part of each themer. I enjoyed the consistency and the entries themselves.

I will also note that the second words can’t have any duplicate letters. For example, the first phrase that came to my mind with CUTTING was CUTTING CLASS. But that would mean only four letters missing from the alphabet (A, C, L, S), which don’t spell any common word in this case. Realizing this as an added constraint I was impressed that a full set of eight in-the-language theme entries could be found and made to fit symmetrically in the grid.

Mixed feelings on the theme, but in the end I enjoyed it and the rest of the grid as well. 3.7 stars.

Theme: Each themed answer is a phrase in which the first letter of each word in the answer spells out A-B-C. 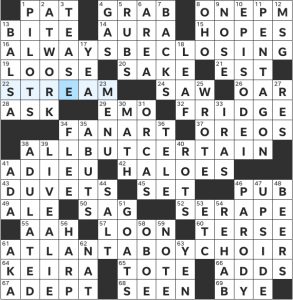 We’ve seen different variations on an ABC-theme, as recently in USA Today as September 6, 2021 with Aaron Paulsen & Olivia Mitra Framke’s puzzle, but I appreciated the twist on it today in Zhouqin’s puzzle. Once I filled in ALWAYS BE CLOSING, I knew what to look for, so it helped me as I went along both with other themers and in catching their crosses.

It’s a nice grid design; not too many long answers, but I enjoyed the four eight-letter Down answers: EPISODE I, PENTAGON, ADULATED, and LIVE A LIE. Rough stuff on having to clue the former of the these as 10d [“‘Star Wars: ___ — The Phantom Menace’”]. Arguably one of – if not the – worst of the films, but it’s EPISODE I, so it fit the call perfectly. I’ll still take a Star Wars reference to the prequels over no Star Wars reference at all.

Other interesting clues from today

That’s all from me for today, folks! Have a good week!