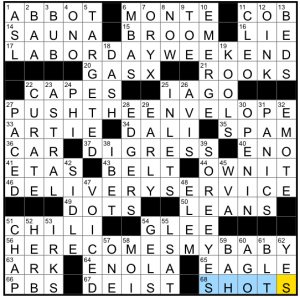 Theme: Today’s theme describes the steps of having a child:

I love both of these constructors, so I was very excited to solve today’s crossword! This puzzle reminded me a bit of the “Mother’s Day Concert” Sunday puzzle from earlier this year, although I enjoyed this one a bit more. It’s elegant that all of the answers are 15 letters, and they’re all solid phrases, although I find the first two a bit more interesting than the last (Maybe that’s just because I’m slightly annoyed at FedEx this weekend for delaying a package I’m waiting for). I didn’t know the Tremeloes song immediately so the revealer didn’t mean much to me, although when I looked up the song after finishing the puzzle I did recognize it. There are popular covers by a bunch of different artists, including Cat Stevens and Yo La Tengo, so if the title and artist didn’t connect with you immediately I’d recommend giving it a listen and seeing if it comes back to you. It’s a really fun song too!

The fill and clues today are… aggressively fine. There’s nothing bad in the grid exactly (well, except for maybe ELEM and WVA), but nothing that particularly excited me either. I believe Downton Abbey is the most modern thing mentioned in either the grid or the clues, and that show ended in 2015. This isn’t me advocating for a bunch of proper names or pop culture to necessarily be put in the grid; I just think that the puzzle could have tried a bit harder (especially given that its revealer is about a song from 1967) to bring a modern, relevant vibe to the fill and clues. For example, TARGETED is clued as [Aimed at] here, which is a passable clue. But why not clue it in reference to TARGETED advertisements, to highlight a more modern usage of the word? But I DIGRESS. This is a solid Monday crossword, even if not the most exciting.

I feel like my sub-two-minute time is in spite of this puzzle’s theme and fill, not because of them: The theme doesn’t jump out at you quite as much as Monday themes tend to do, and there are a few entries that I would have either clued differently or asked the constructor to revise out for a Monday. 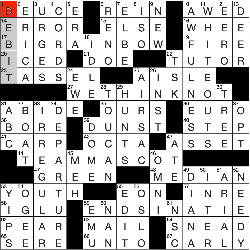 To figure out what’s going on, we go to the revealer at 59D [Concludes with no clear winner … and what each answer to a starred clue does?], which is ENDS IN A TIE. That is, each theme entry has a word that is a type of TIE at the end, although never in a word context. 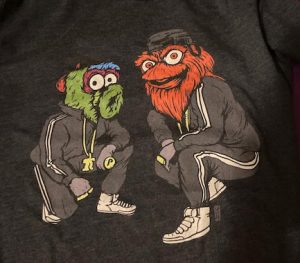 Obviously that’s how you clue that theme entry.

I think for Monday it would have been kind to use circled squares in this theme, given that the theme words aren’t used in a word context. I also think it would have been kind not to have EERO (with apologies to Nate Cardin’s exceedingly cute pupper of that name), ELBE (yes, I know it showed up in one of my grids recently, but that was on Friday!), nor OGEE crossing the historically-correct but less-commonly-seen spelling IGLU and a pretty niche cluing of YIPS [Golfer’s putting jitters, with “the”]. Please note that I do not mean that everyone should keep using the Anglicized spelling of IGLOO; I think if OGEE could’ve been got rid of, that would’ve been good to do.

Theme: Singers of theme songs for BOND films get a rhyming adjective. The revealer at 63d is clued [Protagonist of spy movies for which the four featured singers have performed title songs]. 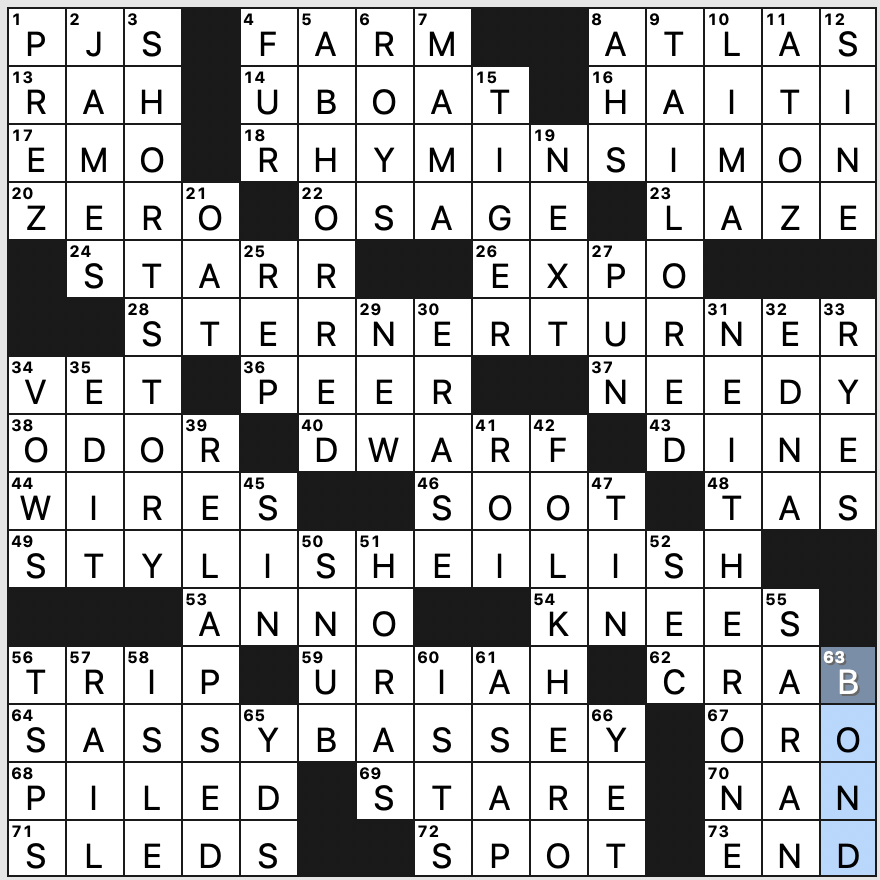 I’m just not seeing the connection between BOND films and rhyming. I note the pun in the title with the use of “verses” (i.e. song lyrics) instead of “versus,” so I get that it’s alluding to spy songs, as it were. But I fail to see how that gets us to finding rhymes for the singers of those songs. Maybe I’m just overthinking it.

Fill faves: SHORT STORY, FOLK HERO, and NEITHER ONE [Not the former and not the latter], though I wanted NEITHER NOR for the latter.

Clue of note: 16a. [Caribbean nation struck by earthquakes in 2010 and 2021]. HAITI. The poor people of Haiti have been through a lot lately, haven’t they? You can choose to help out by donating to Hope for Haiti. 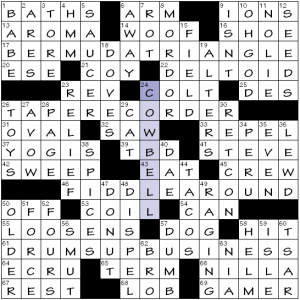 This is a sort of theme we’ve seen many times before. Simply, it’s the names of musical instruments found in phrases.

A rather disparate group: two percussion instruments, a stringed instrument, and a wind one.

The first two are nouns, the second pair are verbs. As verbs, there’s a direct correlation to the namesake instruments. The TRIANGLEs share the same shape (obviously), and the two senses of RECORD are ultimately closely linked.

These alliances don’t constitute dings, but they seem worth pointing out.

I am, however, disconcerted by the presence of 24d [What can be heard when a herd moves] COWBELL. Despite the admirably homophonic and evocatively pastoral clue, it seems less a bonus entry or commentary on the theme and more an intrusion, as it’s a rather common percussion instrument.

Digression: I found a website called ultimatecowbell.com which purports to be a comprehensive database of songs containing cowbell. But it’s poorly designed and lacking what should be basic features. F’rinstance: the song I’ve shared above has a “Bell Score” of 3.59899, but there’s no indication of what the scale is or how the score is determined. Also, there’s no way to sort the 4,000+ songs on the metric of this “Bell Score”. Further, there’s isn’t a discernable search feature, only an index (and not by song title but by band name!). Moreover, once you’ve started exploring, there’s no simple way to get back to the home page (you’d think that clicking the banner up top would accomplish this, but nooo). The site’s ‘features’ are the proprietor’s personal list of top 50 cowbell songs, a listing of newly-added songs, and a random song pointer. In short, it’s a mess. More organization! </rant>

Theme: The theme answers are all going down, so you have types of shakes (fair shake, handshake, milkshake) going vertically in the grid. 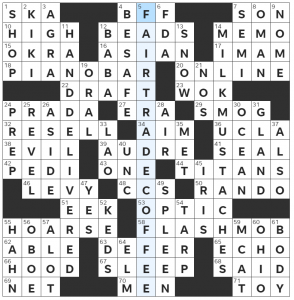 Good morning, solvers! This theme took a little bit for me to parse because I have not heard of the term “fair shake” before, and I usually associate puzzles with the title “up” as having terms spelled backwards in the long down answers. If I’ve misrepresented it in any way, let me know in a comment and I’ll update the post! 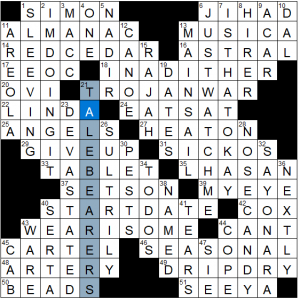 Only 60 words from BEQ today, and it means two patches of wide-open space in the middle of the grid.

Low-count grids like this are reminders of how much one word can jump-start a breakthrough, or two tough clues near each other can hold you up for a while; I moved fine through one half of the grid, and ultimately spent almost half my solve on the open area on the southwest side.

Nothing particularly flashy in the longest answers for me this puzzle, though as usual for BEQ the grid has solid entries throughout. I wasn’t sure about a handful: Is I’M DOING IT (2D- “Already on the case!”) something anyone would say? I mellowed on SLEEVING (1d- Storing, as vinyl in paper) as a verb and TALEBEARERS (21d- Gossip spreaders) after looking them up; both were just new to me. 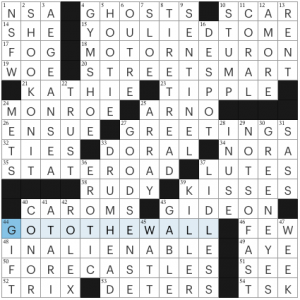 Lovely 66-worder, though it played more like a Wednesday New Yorker (I prefer Mondays to be more rigorous than this). Bit of an automotive vibe: MOTOR NEURON, STREET-SMART, STATE ROAD, TIRE TREAD, and hey, NOT SO FAST.

Fave fill: GO TO THE WALL, SHOOK ON IT, GYM SHOE (sneakers are things whose naming is highly regionalized, but Chicago is GYM SHOE land; you can keep your “tennis shoes” worn for a zillion other sports, m’kay?), GREEN EYES (which is not at all green-paintish).