This week we’re looking for a major world city. Mike provided a nudge at 47A (CAPITAL, clued as “A hint to the contest answer”). I didn’t spot other obvious theme entries, so I focused on CAPITAL with two theories: capital cities and capital letters in the grid. The city angle fizzled out initially (but came into play later), but TYPEO and MIDDLEC indicated the right rabbit hole: capital letters. I made a few missteps compiling the list (I initially omitted proper nouns like LAVER, and tried to use both P and H in PHLEVEL until I Googled it and saw that only the “H” is capitalized), but everything came together fairly quickly: 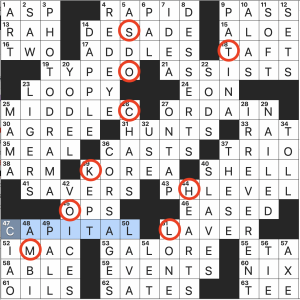 The theme entries are a combination of proper nouns (Taft, etc.), individual capital letters (typeO), nobiliary particles (deSade) and camel case words (iMac), etc. The letters spell Sweden’s capital city STOCKHOLM, our contest solution. This meta provided a nice amount of give-and-take as I sorted out the mechanism, and I enjoyed how the title tied the capital city/capital letters theme together. We’ll end with Camera Obscura covering ABBA‘s Super Trouper.