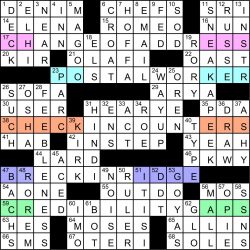 Good day everybody! Hope everybody is doing well and came off having a good weekend.

It is possible that your weekend involved playing a few games, and today’s grid creatively presents some well-known playing games. In each of the five theme entries, the circled letters at the beginning and end of the entry, when combined, form a type of game.

Give the grid and the reference to poker in one of the entries, it was nice to also see a common poker term, ALL IN, feature in the grid as well (65A: [2021 autobiography by Billie Jean King]). That crossing of HEARYE (31A: [Quaint attention getter]) and OREN was a little tricky for me, as I initially put in “hear ya” for the former to start (25A: [___ Ishii (“Kill Bill” character)]). The more I read about Grandma MOSES not starting her art career until she was almost 80 — and now learning that “Sugaring Off” sold for over a million dollars in 2006 — gives me hope that there is a lot more to come in my life than what has already happened (64A: [“Grandma” who painted “Sugaring Off”])! I wonder what activity I would pick up during my golden years. Probably leaning toward making pizzas/opening a pizzeria. That would be cool to do to keep active and be involved in something you love. (In my case, I love food!)

“Sports will make you smarter” moment of the day: HOFFA (7D: [Teamsters head convicted of jury tampering]) – How did I, and many others, first learn about Jimmy Hoffa? Well, if you’re from the New York/New Jersey area and a football fan during the 1990s, you probably heard about the long-standing rumor that Hoffa was buried underneath the playing field of Giants Stadium, inside of the Meadowlands Sports Complex in East Rutherford, New Jersey. In 1975, the year Hoffa went missing in Michigan, Giants Stadium was being built, and 14 years later, a self-described mafia hit man stated in an interview with Playboy Magazine that Hoffa was entombed in the stadium. Of course, the story was rumor (and confirmed to be just that after an actual FBI investigation), but that did not stop many comedians and broadcasters from jokingly wondering about it aloud many times over, which is how I first heard of Hoffa way back when. Giants Stadium was demolished in 2010, officially ending all conjecture about Hoffa’s final resting place……………or has it?!? 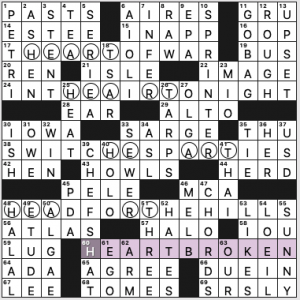 Not quite sure I get the rationale for the theme here. The revealer is 60a. [Despondent … as progressively suggested by 17-, 24-, 38- and 48-Across?], HEARTBROKEN. HEART begins intact but split across words in THE ART OF WAR, and then the letters in HEART move further apart in the next three themers, IN THE AIR TONIGHT, SWITCHES PARTIES, and HEAD FOR THE HILLS. Is this a gradual worsening of the heartbreak? Because the revealer clue just says “progressively suggested,” with no mention of increasing intensity. Please explain why the HE/ART or HEA/RT pieces move further apart.

3.25 stars from me, to be reconsidered if a new light dawns on the theme’s workings. I’ll leave you with 36d H.E.R.’s Grammy-winning song.

This puzzle has two revealers, in addition to the title, which is somehow appropriate. The first one is TWO-PARTER (57a, [Story with a cliffhanger, perhaps, and a hint to the starred answers]. I was a little slow on the uptake, so this one didn’t result in the aha moment I wanted. The second one is BREAK EVEN (66a, [Neither gain nor lose money, and what the starred answers do]) and gave me the clue I needed. Each theme answer has the word (number?) TWO broken across its pair of words. 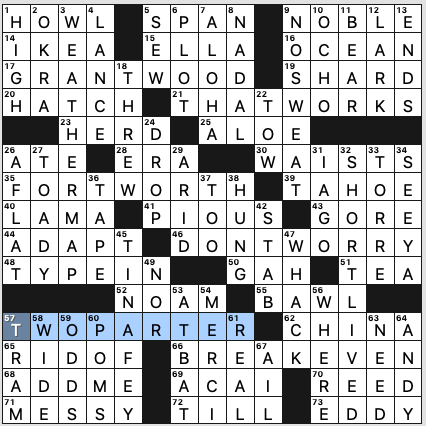 Strangely, it was the second revealer that did it for me, even though the first one makes more sense. Each theme answer is a “TWO” parter since each one parts the number TWO. BREAK EVEN would be more suited to a theme that hid numbers TWO, FOUR, SIX, EIGHT, etc. I do really like the title as a perfectly apt added hint.

Top notch long fill and a clean grid are what I tend to expect from Evan, and this one delivers. We get WEATHER MAP, SHORT-LIVED, “NO SWEAT,” and TINA FEY holding down the marquee spots. I’ve also been known to exclaim “GAH!” so that one brought a smile to my face.

A simple theme, but well-executed and with lovely fill. 3.8 stars.

THEME: Phrases that are homophones of two words, which can be found crossing the phrase. 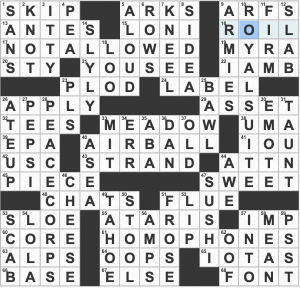 I can appreciate this from a constructing perspective. It’s actually quite thematically packed. Lots of constraints, and great finds. I can’t imagine it was easy to find phrases that could be “double crossed” like that and get it to fit symmetrically. Very impressive.

From a solver’s perspective it seemed a tad on the dull side. The longer answers are no-brainers that are revealed in (somewhat bland) bits of fill. So there’s not much figuring going on. Just filling in the blank without appreciating the longer colorful theme phrases.

The HOMOPHONES revealer seemed rather unnecessary as well. For a second, I thought it would be double crossed with two homophones, but clearly that doesn’t make sense as there are no homophones in HOMOPHONES. And it really doesn’t do much to reveal anything. The theme is crystal clear without that. I would’ve preferred another doubly crossed homophone there, I suppose.

Not sure I’m ready to accept PLS as crossword fill, coulda done without ARFS, and no desire to try FROSE :) Still, with the amount of theme, it’s rather clean. LONI Love is new for me.

While I appreciate it, I can’t say it was my fave. 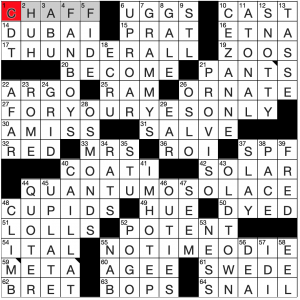 Yes, there is a new James Bond movie coming out this Friday, so this puzzle is quite timely!

So we have Bond film titles with one letter taken out, and then everything else re-spaced and clued in a punny way. Yes, I have three error marks in the grid. All fat-fingering mistakes! I may even go see the new Bond movie this week. We shall see! 4.7 stars for this one.

That is all! Another Jonesin’ next week! Perhaps with a review of the new Bond movie, No Time to Die! 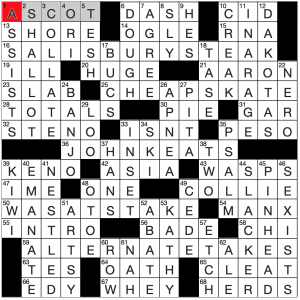 I almost figured out the theme while solving this time! We have anagrams!

So the ends of all of the theme entries are, literally, “alternates” of the letters in TAKES. Nicely done. Rather smoothly done, although 50A is a little forced. But easily solvable, so all is good. Nice puzzle, Craig! 4.5 stars from me.

A fun puzzle today! The grid is particularly intriguing, with many segments that remind me of sun rays or a starburst. 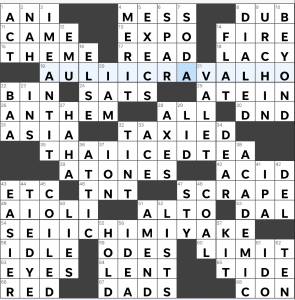 Theme: Two letter “i”s are next to each other in the themers, hence “ii” or what sounds like “aye, aye”.

Two of the themers were names of people that I wasn’t familiar with but were great to learn about. Around the time of “Moana”’s release, there were many articles about the reaction AULIICRAVALHO had to hearing about being chosen for the role. THAIICEDTEA is delicious, a creamy black tea with sweetened condensed milk—certainly a decadent and delightful drink. The impact of the invention by SAIICHIMIYAKE of tactile paving, also called “braille blocks”, allow for more accessibility to create textured safety zones on the street for the blind or visual impaired. While they all three aren’t names, it is nice symmetry that they are the first and third themer.

Stumpers: SCRAPE (“skate”), TIEDYE (just wasn’t in at the front of my mind so took a couple of letters), and SODA (needed crosses for this one)

Though solving took me a bit longer than usual, the clues and entries were fun and fair. I enjoyed the puzzle and looked forward to continued collabs!