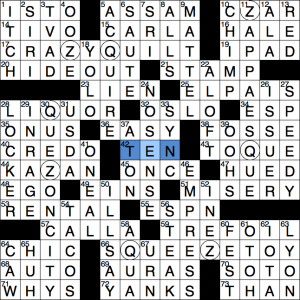 hello and welcome to episode #696 of matt gaffney’s weekly crossword contest, “Four Score”. for this week 1 puzzle of TENTH MONTH, i tried it without the instructions (which, spoiler alert, turned out to be basically impossible). okay. what are the theme answers? there are four ten-letter answers arranged in a pinwheel:

in addition, the central across entry is {Value carried by two certain letters in Scrabble, both of which are seen in this puzzle’s theme entries} TEN, referring to the Q and Z in the themers, the only letters worth 10 points in scrabble.

so that’s certainly the theme. what’s the answer? without the instructions, i really did not know, although the most straightforward answer would just be “Q and Z”. i went to the website to submit that, but before doing so i did check the actual instructions: This week’s contest answer is a country in Africa. well, i would never have guessed that, but there is only one country in africa whose name includes both Q and Z, and it’s also ten letters, like the themers in this puzzle: MOZAMBIQUE. so that’s the meta answer.

i also noticed that matt seems to be setting up a month-long meta-meta for october, as he has occasionally done in octobers past. that’s interesting! based on the first answer, i have some thoughts about how that might work, but i’ll keep them to myself for now, even though i fully expect that the actual mechanism will be something that can’t be solved until the week 5 puzzle comes out.

that’s all for week 1, then. it’s nice to be able to start a new streak after missing the last two. we’ll see if it holds up throughout TENTH MONTH.