Our constructor today is linguist and language columnist Ben Zimmer. He’s had a few collaborations in other papers, but this is his first solo effort and his first for the WSJ. He’s also chair of New Words Committee for the American Dialect Society which means he oversees their Word of the Year selection. Last year, they chose “Covid.” Place your bets now for 2021. Hmm. How about “vaxxed”?

I quite enjoyed this theme. Theme answers are phrases which feature a compound word, but that word’s been “fractured” (in this case, placed in reverse order), thus ensuring crossword wackiness. 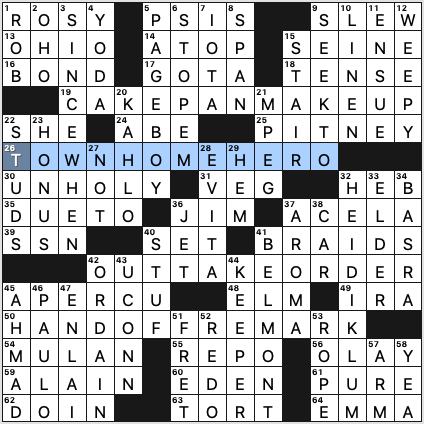 Cute, huh? I like the fact that the compound words employed here are still legit compound words after the reversal (e.g. TOWNHOME and HOMETOWN are both compound words whereas something like BALLROOM is but ROOMBALL is not). Novel theme, clever title, and fun entries. What’s not to like?

Okay, maybe that SW corner is a little rougher than usual with its glut of proper names: AHMAD, PAULO, ENLAI, MULAN, and ALAIN, with APERÇU thrown into the mix. Another tough one for me was HONUS [Wagner whose baseball card sells for millions]. But if you could work your way through all those names, the rest is quite nice. I like the defiant “SINCE WHEN?” as well as HEIDI KLUM, PAGEBOY, BELMONT, and UNHOLY alliances. 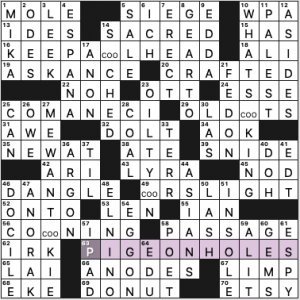 What ho, a rebus on Wednesday? Sure. There are four COO rebus squares, pigeons and doves coo, and the revealer is 63a. [Typecasts, in a way … or a hint to four squares in this puzzle], PIGEONHOLES. Cute. 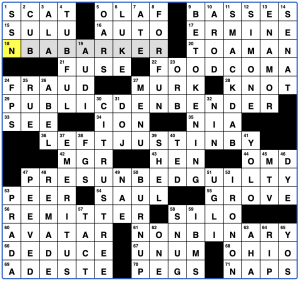 Francis Heaney has today’s AVCX, and it’s a lovely one that’s right at 2.5/5 difficulty:

In each of the theme entries, the M or F that would typically go in the phrases MA BARKER, PUBLIC DEFENDER, LEFT JUSTIFY, and PRESUMED GUILTY has been replaced with NB for non-binary.  Thus, “they’re” here.

Halsey, who 32D notes had their latest album produced by Trent Reznor and Atticus Ross of NIN, also identifies as non-binary and uses they/them pronouns 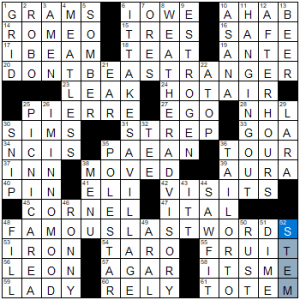 The first two-thirds or so today played much easier than a typical New Yorker Wednesday, and then the bottom four or five rows slowed me down plenty. It’s been a bit since I’ve had that experience in The New Yorker.

Robyn’s typical voice shines through, with four grid-spanning entries: DONT BE A STRANGER (20a- “Hope to see you again soon!”), FAMOUS LAST WORDS (48a- Sarcastic reply to an optimistic pronouncement), IT TAKES A VILLAGE (6d- Book subtitled “And Other Lessons Children Teach Us”), and WEATHER ADVISORY (8d- Shakespeare in the Park spoiler alert?). I particularly love the reworking of “spoiler” in that last one.

Despite my slowdown at the end, I found this smooth — I’m sure the familiar long answers help plenty with that, as do plenty of entries I just plain like: AHAB, TRES clued specifically to the delicious (15a- ___ leches cake), PAEAN, GOA (33a- Indian state that’s home to the tomb of Saint Francis Xavier, in the Basilica of Born Jesus), the author CORNEL West, among others. I’M IN NO MOOD (26d- “Don’t test me”) sure looks funny in the grid, but it’s certainly in my vocabulary, and I love when a tricky letter pattern comes in like that. 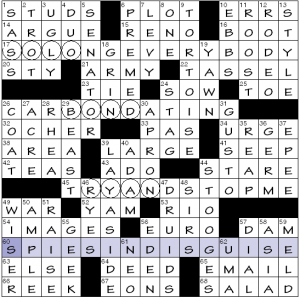 Perhaps it’s because I’m feeling a bit luster, lack luster, this morning, but this theme isn’t thrilling me. There isn’t anything wrong with it per se, but it seems that a related set of four-letter words hidden in phrases isn’t so awesome.

Wishing I could get back under the covers this morning.

Theme: Each theme answer is the name of a woman with the letters SALE in her name. 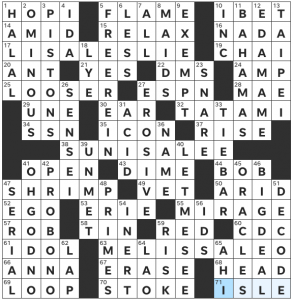 I’ve written before that it can be tricky to do an “easy” puzzle with a proper-noun heavy theme, but I think this puzzle does a great job of it. Even if you never have heard of one of these women before, the theme of the puzzle helps you get about half their name. For me,  despite being a WNBA fan, I didn’t immediately know LISA LESLIE, but all the crosses are fair, and once I had “sale” in place it wasn’t hard to puzzle out the rest. I remember MELISSA LEO less from her being in “The Fighter” and more from her Oscar campaign for the film where she put up “Consider…. Melissa Leo” ads all over Los Angeles and the media had a field day about it. For context of how weirdly big of a deal it all became, “The Fighter” came out when I was 12 and I still remember this discourse clearly. And SUNISA LEE is clearly incredible (Minnesota represent!)

Anyone else notice this puzzle is asymmetric? There’s an extra black square in the middle left, making HALAL and DECODE symmetric in the grid. Honestly, I’m into it. One extra black square does not affect my enjoyment of the puzzle at all – I didn’t even see it until I had finished solving. What does affect my enjoyment is fun, clean fill, and this puzzle has it in spades (especially impressive in a puzzle with this many theme constraints). All four corners have great long answers – EDAMAME! BIG DEAL! BAHAMAS! In terms of trouble spots, it took me a bit to get UNE (kept parsing [A, in French] as… just the letter of the alphabet??) and EROSIVE is a real word but my brain keeps wanting it to be “corrosive” or something a bit more common. Overall, though, a fun puzzle for first thing in the morning. 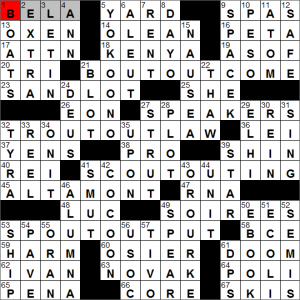 Odd theme, in part explained at DPS. Double plays occur when there are two outs. There are four answers which “?” style made-up entries that oddly lack the “?” warning courtesy. These all include OUTOUT. So: BOUTOUTCOME, TROUTOUTLAW, SCOUTOUTING, and SPOUTOUTPUT.