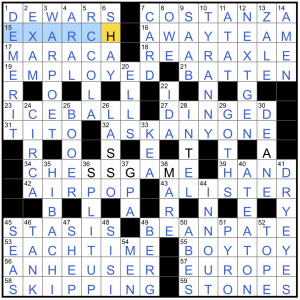 I get what’s going on with Timothy Polin’s Thursday NYT this week, but I’m not sure how I feel about all the unchecked squares, thematic as they are.

We’ve got three rows of squares where every other square in the grid is black, spelling out ROLLING, ROSETTA, and BLARNEY.  These, of course, can all be followed by the word STONE, and with the black squares cutting these words up, these become SKIPPING / STONES (58/59A, “With 59-Across, lakeside activity … or a hint to the words spelled across the fifth, eighth and 11th rows of the completed grid”)

The unchecked squares spelling related phrases helps with the difficulty of not having crossing letters for some of these, but overall I think this one just wasn’t for me.

If you somehow haven’t checked out Ted LASSO yet, I highly recommend it

theme aside, there was plenty to like in the grid: DEWARS, The COSTANZAs from Seinfeld, CHESS GAME, BOY TOY, TYRANNY, HIBACHI, and IN-N-OUT.  One question though: is BEAN PATÉ actually a thing?  Isn’t that just bean dip? 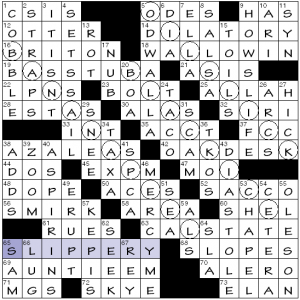 On that last, awful—yet to a large extent predictable, which is to say, expected—what happened on the California coast this week. Just the latest of our careless assaults.

~In my customary spin through the grid for purposes of this write-up I’m realizing how choppy the center of the grid is, necessitated by those aforementioned stepped black squares. Many four letter entries. Wasn’t so noticeable during the solve, though.~

Kind of a fun theme, but the crossword overall was just too creaky for my liking.

Titles do get much more spot-on than that.

THEME: Two band names are put together and are homophones for common phrases, clued wackily as if they are a concert act. 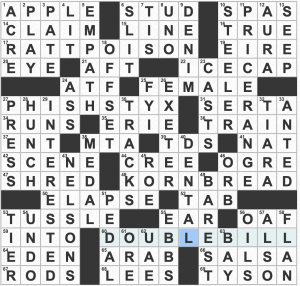 Love this idea! So much fun. But, c’mon… PHISH STYX is clearly the winner. Have they ever toured together? Because they really need to. That would make for one heck of a concert tee. Never heard of the band BREAD, and I casually scrolled through a few of their hits on YouTube. Pleasant sounding group, but I wasn’t much familiar with their music.

I was a bit bummed that there was a revealer when I was excited to see two more bands together. I don’t think the revealer was necessary at all (especially with the title). Woulda definitely preferred another themer. Can we think of anymore? Hmmm… SNOW QUEEN? This is harder than it looks…

Fairly standard fill. Nothing too exciting. Don’t really get the punny nature of [Worm’s dream home?] being APPLE. And NELSONS is a tough plural to swallow.

Theme: The first word of each theme answer can precede the word “life” in a common phrase. 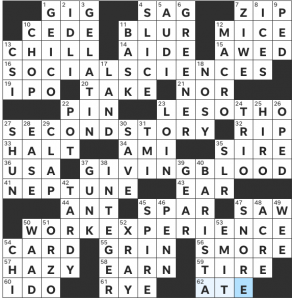 Solid “words that can come before X” theme today. I am always much more likely to enjoy this type of theme if the puzzle has a clever title, and “Life Partners” certainly fits the bill. Kind of interesting that “work life” and “work-life balance” are both phrases, but the “life” refers to totally different things, huh?

Anyone who reads my recaps regularly knows that I don’t love closed off corners in puzzles since they can be harder to break into, and in this puzzle all four corners are just one black square away from being completely closed off. I also don’t mind the number of “helper squares” (black squares that don’t increase the number of words in the puzzle), but because there are so many it felt like there were a lot of short words today. To be fair, though, the short words here are far more interesting than normal! There were a lot of things I didn’t know in this puzzle. As clued, IDLI, ZIWE, HIRO, and WAAD were all new to me. None of them slowed me down too much though (my higher-than-average time comes from a dumb typo somewhere else in the puzzle :( ) 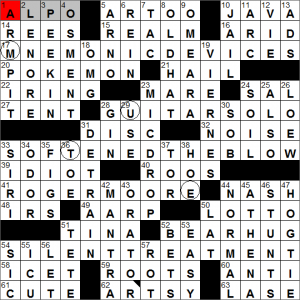 Michael Paleos’s puzzle theme today has a few more layers than a typical LA Times puzzle. The first four long across answers all have a silent letter, which is circled. The circles spell out MUTE. Lastly, the puzzle theme is finished with SILENTTREATMENT.

Theme: All of the Ps can be changed to S in each answer, as in Just S TO P, to form a new phrase. 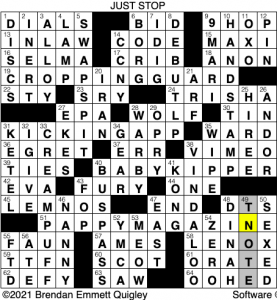 I struggled here with the theme, folks, so thanks to pseudonym and Mark in the comments for helping me clarify! It seems odd in the last answer since you also have to change the first P to an S while the other themers only have the double P line-up, so not my favorite theme. However, I appreciate the cleverness of the title and the wordplay with STOP’s spelling.

Grid-wise, I’m back on my diagonals with the two trios moving through the center of this puzzle. It was a nice mix of lengths, with the 9-lettered SWAP SPIT, HAND STAMP, CREAMPUFF, and VINDALOO moving into the middle section of the puzzle. All of those were clued well, and they’re just fun ones to see.

The top left corner was my favorite set of answers. I always appreciate a reference to SELMA (16a [“2014 Ava DuVernay historical drama”]), and I thought that DISCS (1d [“Othello pieces”]) & DIALS (1a [“Moog knobs”]) played well off of one another.

That’s it from me for today! If you’ve got better ideas about the theme – hit me up in the comments!