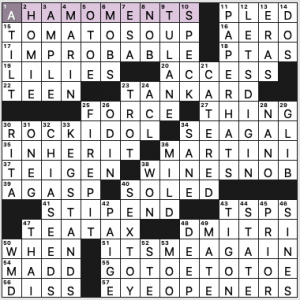 This 70-worder fell swiftly for me, just the thing at the end of a long week. Wait, what? It’s only Thursday night now? Sigh.

While I don’t like theme invasion of Friday and Saturday NYT puzzles, I don’t object to a mini-theme of two symmetrically placed, sort of related entries. Here, the first and last Acrosses are both clued with [Epiphanies], and the answers are AHA MOMENTS and EYE OPENERS, a nice 3/7 split for each.

Bit of a party vibe throughout the puzzle, with food and drink at a CATERED event complete with PAPER HATS. TOMATO SOUP, MARTINI, WINE (SNOB), TEA (TAX), CHIA SEEDS in your smoothie, Chrissy TEIGEN’s cookbooks, KEG STANDS and a TANKARD for the beer drinkers, roasted marshmallows at the FIRE PIT? “LET’S DIG IN“!

Theme: “Small” can be added to the beginnings of each of the theme answers to make up a phrase. 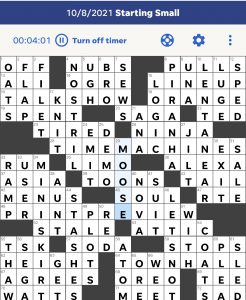 Four theme answers is a change up, with a combo of two 13-letter themers and two 8-lettered ones. PRINT PREVIEW was definitely a fave for me, and TIME MACHINE just makes me want to do the Time Warp again, so that’s below if you want to join in.

The aesthetics of this grid are pretty mesmerizing, if you ask me., moving down diagonally from LIMO to TOONS to SOUL in the center three rows between the two longer themed answers. TOONS, clued as 39a’s [“Animated characters, for short”] and SOUL [“Genre for Mumu Fresh”] pair nicely together if you happen to have just done a puzzle referencing the Pixar animated film (as is my experience). I thought it was interesting that Claire included “for short” in the clue for TOONS, since it often isn’t cued with an abbreviation (or Abbr. for that matter). It is, of course, short for “cartoons,” so it makes sense, but it can also stand on its own.

Overall, a really solid Friday puzzle. The four themers were all very fun, and I thought the fill as a whole was fun and moved quickly. No TSKs or UGHs from me today, except that it’s over! 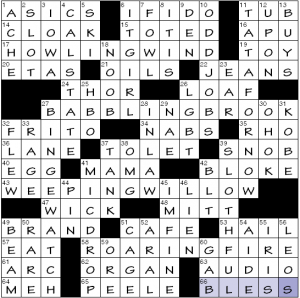 The theme answers all share the same clue: [Call of the wild?]

On the surface these all seem consistent, but WEEPING WILLOW sticks in my craw. While the others are accurately describing AUDIO (63a) phenomena, this one ostensibly describes the tree’s drooping appearance. Further, someone can be visibly but silently weeping. 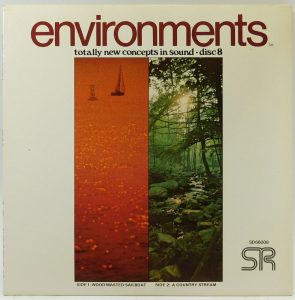 Unsolicited plug: a few months ago I purchased the excellent Environments app for my phone. I was a fan of the original record series from the ’70s and it’s a relative bargain to have the complete collection in a simple yet well-designed form. Streaming it to some decent speakers is great.

Side 2 of the eighth album is Country Stream—our BABBLING BROOK—in Stockbridge, Massachusetts. And number 11 is Alpine Blizzard, which combines HOWLING WIND  outside and a cozy ROARING FIRE inside a SKI (5d) chateau. As you can probablyyyy imagine, there was no such offering for a WEEPING WILLOW, sadly.

Have been trying to think of an adequate substitute but can’t come up with anything that’s the proper letter length. CLAPPING THUNDER, ROARING SURF could replace ROARING FIRE, but that accomplishes little. CRACKLING FIRE and CRASHING SURF don’t help as alternatives. It’s a pickle.

A nifty but slightly flawed in theme crossword.

I love the title on this one. The theme consists of phrases that start with the sounds from the famous line from Jack and the Beanstalk: “FEE FI FO FUM.” The revealer is GIANT (65a, [Fairy-tale creature who says the starts of 20-, 35-, 43- and 59-Across]). 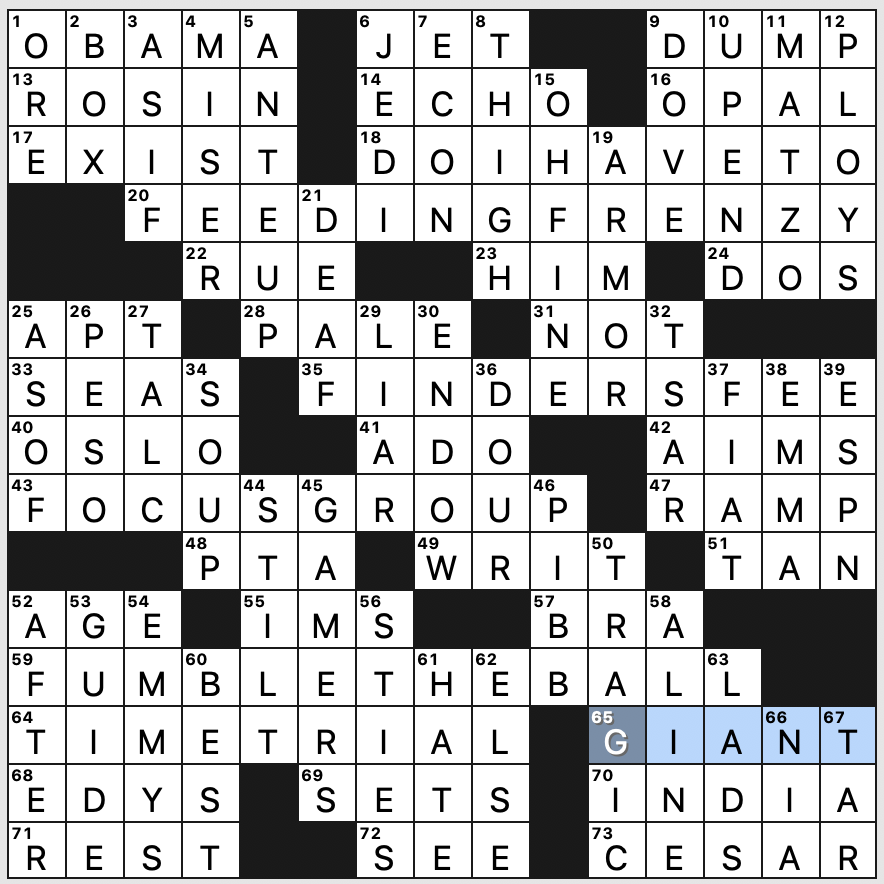 Fee! Fie! Foe! Fum!
I smell the blood of an Englishman.
Be he ‘live, or be he dead,
I’ll have his bones to grind my bread.

When my kids were young we’d listen to the Rabbit Ears Radio production of Jack and the Beanstalk, perfectly read by none other than Michael Palin. It came with a picture book to follow along. You can still find Rabbit Ears Radio stories on Amazon, but thanks to the magic of Youtube, here’s the story in question. If you have half an hour and a kid to prop up on your knee, it’s a good time. At the very least, skip to 12:14 for the GIANT’s entrance and enjoy Michael Palin’s delivery.

I for one like to see a fairy tale-based theme. Fairy tales and nursery rhymes make good puzzle fodder because they are so widely known, and just plain fun to boot. As I said above, I thought the theme was one thing, but it turned out to be something else.  It was nice to have that aha moment that the revealer provided.

In the fill, I love the petulant, “DO I HAVE TO?” Its counterpart is the solid TIME TRIAL. Surprisingly, both of these are in the Across direction. There’s also a resigned, “OH FINE” at 15d.

Today’s puzzle is the 100th Inkubator puzzle! Congratulations to everyone on the team on this amazing milestone! 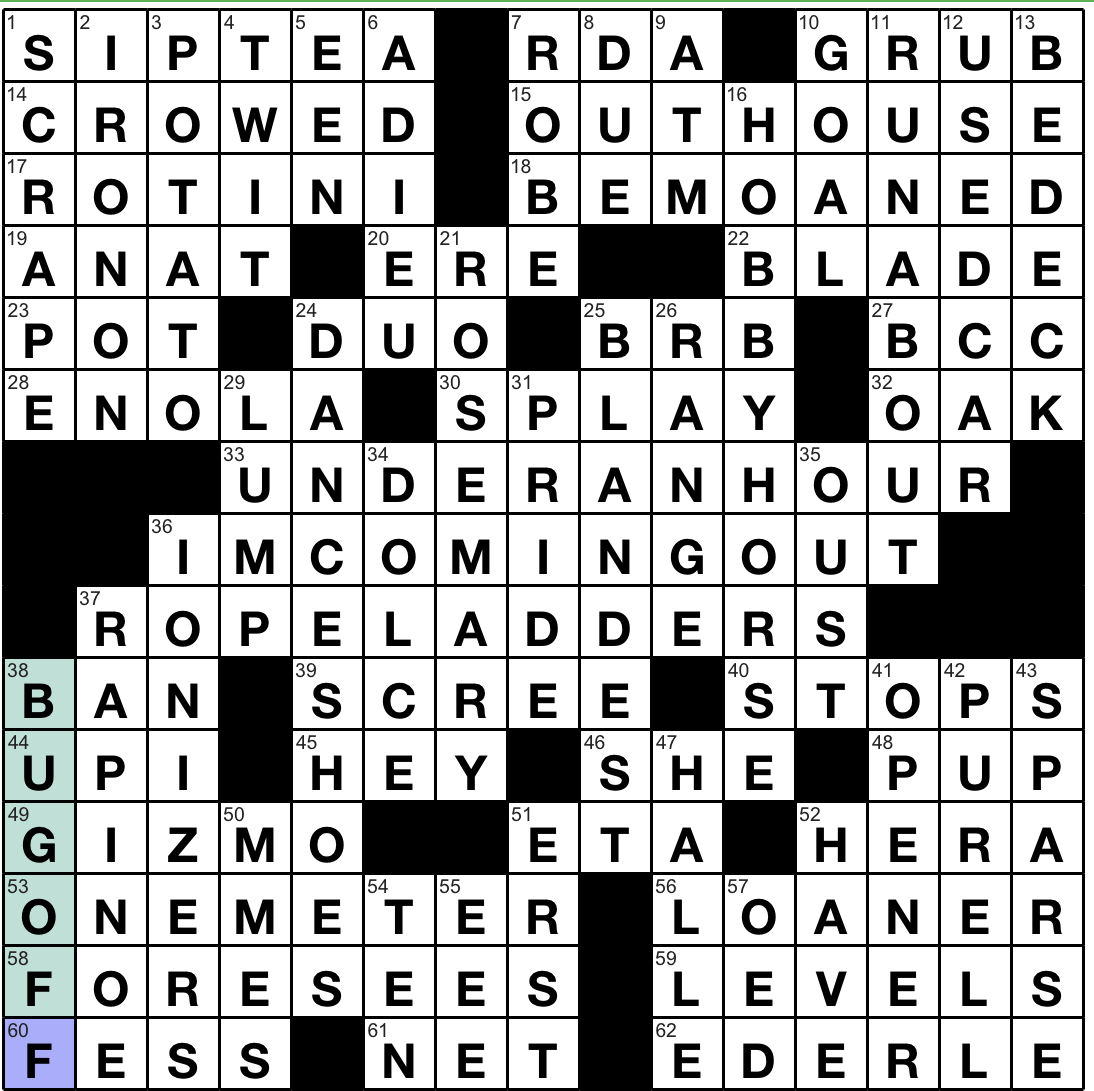 Clean and very well-clued themeless today that was fun from start to finish. I’m normally not a fan of answers like UNDER AN HOUR [Time goal for a 10K runner, perhaps] or ONE METER [Distance traveled by light in about 3.3356 nanoseconds], but the cluing here livened up the entries.

I loved seeing I’M COMING OUT crossing PRIDE. I’m also glad we have a new ENOLA [Fictional sleuth Holmes] to clue for, instead of the plane.

15-Across [Place to go in the country?] for OUTHOUSE

Good morning solvers, apologies for the late review, my weekend was pure chaos. I always vibe with an Anna Shechtman puzzle, and today’s was no exception! Quick bullets: 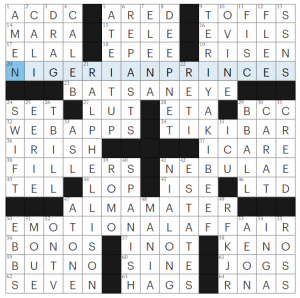