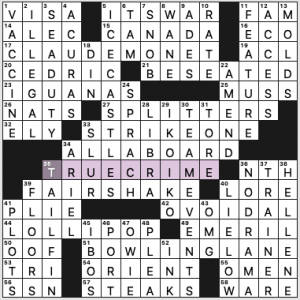 I didn’t recognize the constructor’s name and he hasn’t had any puzzles blogged here before—and it turns out he is 14 years old. It’s a good puzzle! August sets high standards, he told Wordplay, for what goes into his grid, and that’s borne out by this 68-worder with a stagger-stack of 9s in the middle. Keep up your craft, kid!

Fave fill: CLAUDE MONET, STRIKE ONE, ALL ABOARD, TRUE CRIME (anyone else watching the Hulu series, Only Murders in the Building? It’s fun, and a true crime podcast is a focal point), a FAIR SHAKE (might the entry be stronger with the article A included at the front?), LOLLIPOP, VACCINE, and ICE CASTLES.

Solving vibe: Everything fell pretty swiftly except the southeast chunk, where I wasn’t confident about the ends of BOWLING LANE and OVOIDAL and found myself blankly reading all the clues in this area and coming up empty. Eventually the OVOIDAL gamble paid off. 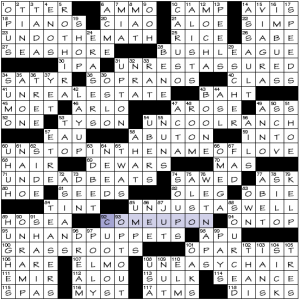 Straightforward enough theme. The letters UN are prefixed to familiar phrases, inverting and subverting them.

It’s a theme that works.

So I wanted to pick a song involving someone named Ewan, but I’m not a big fan of Ewan MacColl. DJ Ewan Pearson’s BEATS didn’t appeal. Ewan MacGregor would’ve come down to a preachy “We are the World” type thing, something from Moulin Rouge, or the ‘Choose Life’ speech from Trainspotting in one form or another—none of which appealed.

Reaching farther afield, digging deep, I came up with this, from my collection. Pascal Comelade with Robert Wyatt performing Kurt Weill’s ‘September Song’, which mentions the months of May, September, December, and November—but not October. But as it is all about autumn coming upon us, it still seems appropriate. Oh, and the guy who recorded it is named Ewan Davies.

What’s that? Talk about the crossword and not music? Okay, sure.

As I said, the theme is solid but overall the crossword felt unexciting and grew a bit sloggy toward the end of the solve. Some more liveliness and humor might have helped, but this sort of thing is often a concern with large-format grids. 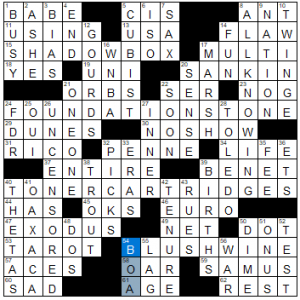 Today’s USA Today is from Brooke Husic, who’s recently joined the Inkubator as Managing Editor, if you missed that news. Getting into it:

So we’ve got SHADOW, FOUNDATION, TONER, and BLUSH, and yep, the title is “Do Makeup“. Can “do” apply to one’s face, as well as hair? Merriam-Webster doesn’t support it, but if it can, there’s a nice double-meaning in “makeup” there.

SHADOWBOX is a great entry for my money, and dredges up a great song from my memory, below. I had a small slip-up on BLUSH WINE; without the accent on “Rosé”, I went in the color direction, trying BLUSHpink, thinking of any way to describe the dozen or so hues that cover the so-called “millennial pink”. I’m not actually seeing any instance of “Rosé” without the accent referring to wine, in about 10 minutes of Googling, so take that for what you will.

(Edit: Brooke has chimed in in the comments that the USA Today doesn’t render diacritics, which I should have thought of. Thanks, Brooke!)

Stuff I particularly liked: USA (13a- St. Louis’ country), not for the answer, but the clue. Brooke is always good for a St. Louis reference (I do the same with Buffalo), to the point that I get faked out just about every month on her difficult blog puzzles at x words by a ladee. All I know about Metroid is the name SAMUS (59a- Metroid protagonist Aran), but that was enough here. The clue for PENNE (32a- Diagonally cut pasta) is simple, but a fun way to lead my brain to the answer. 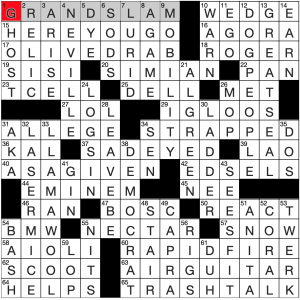 I found this one a little tougher than a normal LAT Saturday puzzle for some reason. Not sure why. I actually plowed all the way through this one before I realized my good buddy Kyle Dolan had today’s puzzle! Maybe if I would have checked the byline first, that would have made the solve a little easier! I usually have no issues with Kyle’s grids. But this one was fun, and a fine challenge to overcome. 4.7 stars from me!

Burn After Solving, the NPL Extravaganza puzzle hunt, starts today, so there goes my Saturday! If you aren’t in the NPL, why on earth not? Click on puzzlers.org for more info. 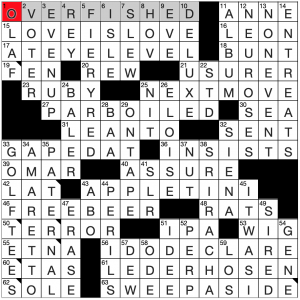 I still struggle mightily with Matthew Sewell’s Stumper puzzles! This one took me forever to solve. Lots of error marks, as you can see! One or two may have been a typo; that’s my story and I am sticking to it! I found this quite the challenge, but still not the head-banging toughies from a few years ago. So either they are easier or I am actually getting better. The Boswords League puzzles are actually quite difficult, too. I count these both about the same level, and both harder than the NYT. But I realize this is all subjective, and a lot of people even find Monday NYT puzzles undoable! Anyway, I digress. Looking forward to Matthew’s next Stumper so I can see if my solving time improves. 4.6 stars for this one. 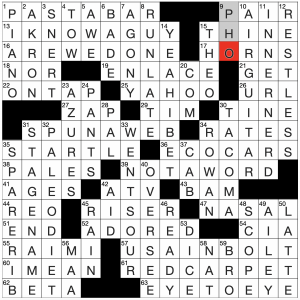 Nifty title, eh? Looking forward to 2022! I love a good themeless, and I think the way Universal has presented the few that they’ve published has made them fun and accessible to solvers at any skill level.

Congrats on a debut to a very young constructor! Leo Dudley is only 13 years old. I’m glad I know that despite my absolute least favorite types of clues (frequently featured in Universal) being the navel-gazing type. Like when the clue for ART was [Crossword puzzle construction, e.g.]. It’s very eye-roll inducing. Here it’s [13 and 24, for this puzzle’s constructor and editor] AGES.  Seems very pat-on-the-back-y to me, especially for the editor to include himself. But again, I wouldn’t have known that our constructor was so young otherwise, and I’m glad I do… so there’s that. I’m conflicted.

Lots of impressive, fun stuff here. Faves include:  NOT A WORD! I KNOW A GUY…, PASTA BAR, and ARE WE DONE? That upper left corner was a great way to start the puzzle.

Creepiest clue award (is there an Orca for that?) goes to 61D [Where “Who are you wearing?” is asked]. I always say, when SILENCE OF THE LAMBS REENACTMENT FESTIVAL doesn’t fit, go with RED CARPET.

Welcome, Leo! Thanks for the puzzle! Looking forward to seeing more from you. Perhaps in 2022?