Okay, this puzzle had me from the title. Clue is among my favorite movies – campy and iconic, with multiple endings to keep you on your toes (though the only ending that really matters is the one that includes the ever-quotable flames on the side of Madeline Kahn’s face). What a fun twist, then, to have the title literally tell us what each of the theme entries will do: clue a movie. 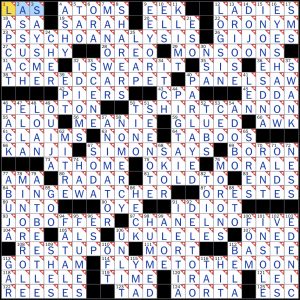 Now this is how you do a Sunday puzzle right, in my opinion. Even though it’s a 21x grid, you don’t need to rely on super long theme entries. Instead, the constructor focused on getting the best entries (even if they were short) and building a strong puzzle around them. Not bad at all for his first Sunday NYT puzzle!  I had a big smile on my face as each themer dropped, jealous that I didn’t come up with many of them myself. I’d love to see the constructor’s list of theme entries that didn’t quite make the grid.  Brandon, share your secrets!

Other random thoughts:
– I loved the “Clueless” counter-reference to “Clue” at 24D (CHER).
– I especially appreciated the gender-neutral cluing for EPT at 39D, which felt very trans-inclusive.
– Clues like [Drawer of shorts, e.g.] for ANIMATOR will always make me smile – I love asking my brain to bend and stretch like that.
– I’m not the most excited about have IDIOT or MORONS in a grid, much less both.

That’s all for now – let me know in the comments what you enjoyed about the puzzle.  Have a great week!

Whether you’re having a good hair day or not, this is a fun one to wake up to!

THEME: Hair styles are added to the front of common phrases or words and wackiness ensues. 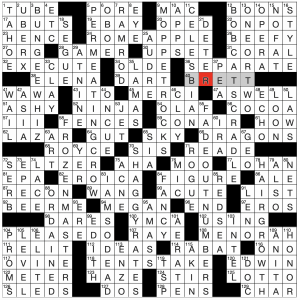 Hairstyles seem to lend themselves to crossword themes for some reason. I’ve seen a bunch of themes featuring them. Always different and usually enjoyable, like this one is. Just odd that hairstyles and famous doctors seem to be regulars in Crossworld rotation.

Very simple concept here, but I tripped over my own feet quite a bit during the solve. Grokked the theme easily with BUNGEE WHIZ. And if you say it aloud, the GEE WHIZ is firmly intact. I like that! There are a couple answers where the base phrase is not audibly intact, like PERMEATING CROW / Eating crow, and SHAGGY RATES / Gyrates. Those were less enjoyable to uncover for me. BOBCAT’S CRADLE was my favorite entry, especially since it gave me a foothold in that corner where I was struggling.

Up there, I had difficulty with STYLE, CORAL, BOONS, BRETT, and CELESBIAN. I love that last entry, but it’s a word I’ve never heard of. And it crossed a new BRETT for me. I initially had TRENT for BRETT, and then changed it to TRETT as I figured out the crossing BOBCAT, but I forgot to reexmine the initial T. Can’t really call it a Natick because there is plenty that’s inferable. I just chose not to infer. Ted Lasso is on the ever-growing list of must watch shows, but haven’t gotten there yet. And CELESTIAN sounded just fine for me as some sort of star who is coming out of a closet. Before I move on from that corner I just want to give a little side eye to ON POT. There. Just did it.

My favorite mistake was GOFER for GAMER at 28A [One who may take part in speedrunning]. I totally accepted that an office intern would be speedrunning in order to impress the higher-ups with their work ethic in hopes of securing a job later. I like to read deeply into speedrunning clues.

Jennifer Pauli, AUDRE Lorde, Aloo matar, EDITH Hamilton, ELENA Ferrante, BRETT Goldstein, LAZAR Wolf (despite accompanying Fiddler on the Roof on piano for at least half a dozen different productions of it), MEGAN Thee Stallion. Less than normal I think.

Favorite clues were [Fire company?] DRAGONS, [Company product?] OPERA (the “company” refers to the “cast” of the opera), and [Dream ticket activity?] LOTTO. 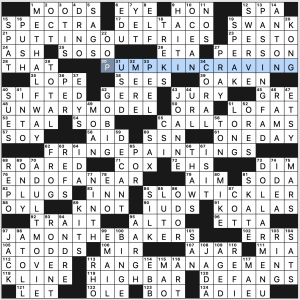 Works well enough, though nothing tickled me especially (despite 84a).  I appreciate that there are no extraneous Rs in the base phrases.

I also liked seeing DEL TACO, but then I grew up in California, and this is a chain restaurant based primarily in the Golden State (601 restaurants in 16 states but 369 of them are in California). Solvers in other states might have had trouble with that one.

Theme: The first word of each theme answer corresponds to a music recording certification level BESTOWed by the Recording Industry Association of America (RIAA): platinum, gold, and diamond. 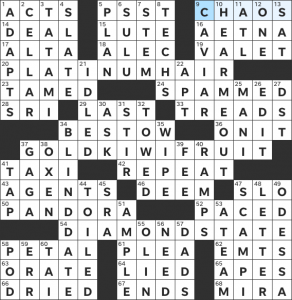 Being neither a Game of Thrones fan nor aware of Delaware’s epithets, I got most of these on the crosses. I had some idea with GOLD KIWI FRUIT but still needed the Down clues to help me. This theme was interesting to me because it was both pretty obvious once I finished the puzzle and also difficult because I had no idea about who determines these levels for records. The levels – gold, platinum, and diamond – are just so embedded in our pop culture that seeing all three together was a snap. However, now I know much more about the RIAA and the sheer quantity of records required for each level.

Six-letter downs kick off the puzzle, complimented by their rightward counterpart in the southwest corner of the grid. ADAPTS (1d [“Changes with the times”]), CELLAR (2d [“Place to store root veggies”]), and TATAMI (3d [“Mat a judo dojo”]) formed a stellar acrostic start to ACTS (1a [“Segments of an opera”]). Likewise, I loved the use of the 9-lettered HEAR ME OUT over in 10d [“‘I know how it sounds, but listen…’”]. Those longer, more colloquial phrases bring out such good energy to a puzzle. It takes a really skilled constructor to get me where I need to go when the answer doesn’t depend on a straight-up definition. I talk a lot about crossword answers and how they’re clued, but answers like these are the ones that I most often mentioned to those who don’t do puzzles regularly to show how accessible it can be.

Other things that stuck out to me:

Alright, you’ve listened to me talk long enough. TLDR (is this supposed to go at the beginning? whoops): HEAR ME OUT, this was a great puzzle. Record certification was the theme, and clues covered cool film directors, baseball, flower parts, and streaming services. 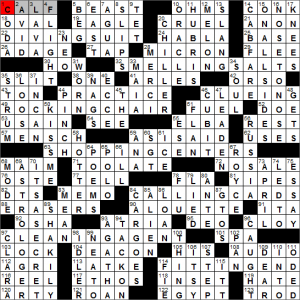 Today’s Sunday puzzle by David Alfred Bywaters is the type that you have to kind of be willing to go with, as while it is playful, it is quite loosely defined. The seven entries each consist of a participle associated with one vocation and a noun associated with a second which together make an unrelated phrase. I feel like the associations started off tighter and then gradually got more iffy. We started with DIVINGSUIT, an [Exec working as a lifeguard?]. Both SUIT and SALT in SMELLINGSALTS, [Sailors working as aromatherapists?] are informal nicknames for vocations. The trend continues with ROCKINGCHAIR, [Committee head working as a lead guitarist?]. Now that I know what Instacart is, SHOPPINGCENTERS makes more sense. It is clued as [NBA players working as Instacart employees?]. [Comics working as phone solicitors?], CALLINGCARDS seems a tad weaker, as no comic would call their job CARD. The set is rounded out by CLEANINGAGENT and FITTINGEND, which was too tempting to not finish on it seems.

I’m not sold on the meta-clue for CLUEING as a [Crossword constructor’s chore] as that lingo is not familiar to the general public.

THEME: Common phrases that start and end with the letter B. 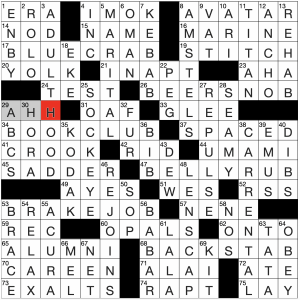 This is nicely done. Very simple, over-the-plate theme type, but a joy to solve. Six fun themers that never try to upstage each other and all 8 letters made for nice cohesion. Determining the bookended B theme also led to a certain synergy between fill/theme, which is always welcome.

Not new for me, but new for me because I never see it in writing is ENBY (actually, I saw it in writing once before if my memory serves me correct… it was the theme for a Universal puz, perhaps during pride month?) Also new for me: NENE Leakes.

Thanks for this one, Jesse!