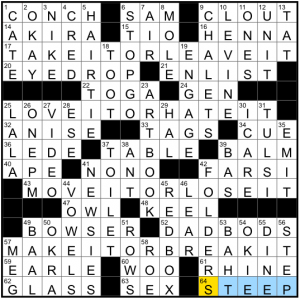 This isn’t a particularly groundbreaking theme, but it’s a solid enough one for a Monday and will be easy for new solvers to pick up. The first two theme answers are great phrases, and I particularly enjoyed LOVE IT OR HATE IT as an in-the-language phrase I haven’t seen in a puzzle before (it being 14 letters long probably contributes to that). I haven’t heard this use of MOVE IT OR LOSE IT before – I think of that being a phrase related to fitness? Like, move your muscles or they won’t have any more tone? It’s too bad “use it or lose it” doesn’t work symmetrically with the other answers…. (the other thing I immediately thought of with this theme was the TV show “Love It Or List It”, where couples decide whether to sell or renovate their houses). I also use the term “make or break” sans “it” much more than MAKE IT OR BREAK IT, but it was easy enough to figure out given the theme structure.

Often times puzzles with four grid-spanning answers (or as is the case here, nearly grid spanning answers) can end up with choppy corners full of three letter answers. Ben did a really nice job here of placing black squares so that each section of the puzzle was relatively open and contained several long answers. Sure, there isn’t a down in the puzzle longer than seven letters, but as a solver I’ll happily take that trade off to get to see more fun mid-length fill. There’s a lot of great stuff today – favorites for me include HAIR TIE, NEWSIES, and BOWSER. Somehow DAD BODS already feels kind of late-2010’s dated to me – do other people feel like that?? Definitely a term from the REDBOX era. I also liked the Star Trek clue on ENGAGE and the pun in the 20a [What may have the solution to your vision problems?] clue for EYE DROP. 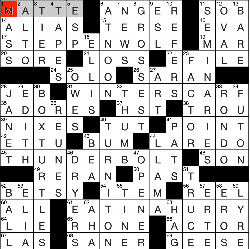 Apologies that I’ve not got a lot to say about this puzzle — time just got away from me this weekend, although I didn’t need much time on this quick solve.

Jumping down to the revealer at 61A [Gobble down food, and a hint to the ends of 17-, 31-, and 45-Across], we get EAT IN A HURRY, because all three theme entries are either compound words or phrases whose second part can mean “to eat fast.”

I’ll stick with slower, mindful eating (when I remember to, at least), but it’s a legit theme and a nice easy solve, plus I enjoyed seeing one of my fave pop artists, JANET Jackson, at 28D. 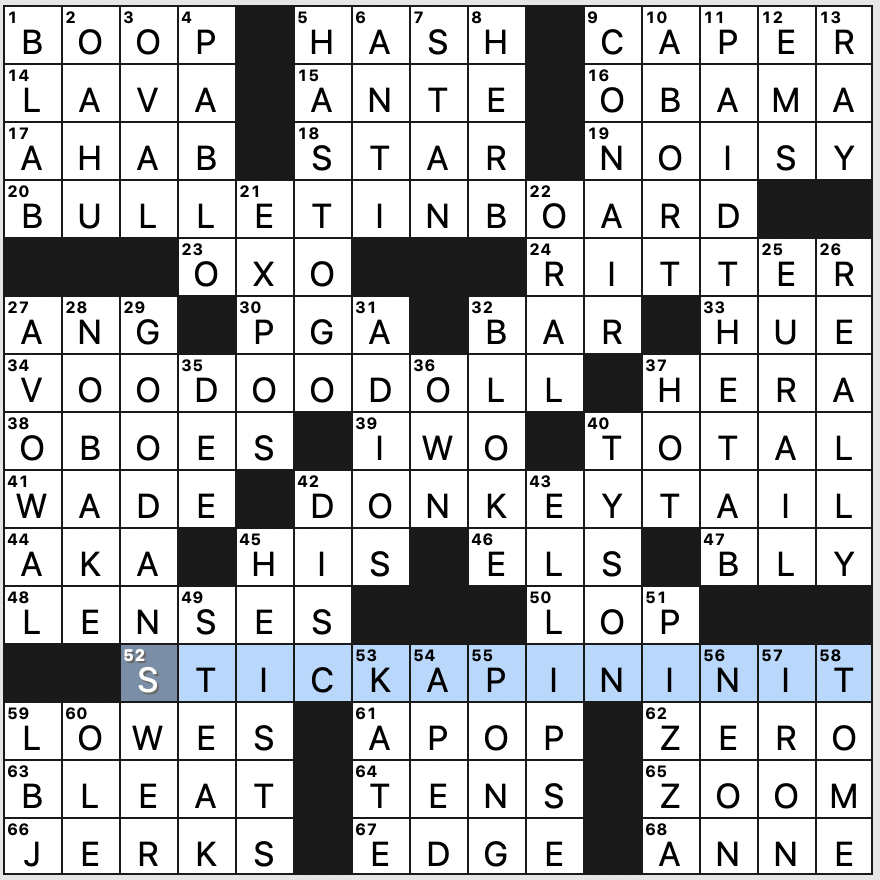 Solid set, though DONKEY TAIL isn’t an in-the-language phrase like the others. The theme is consistent in that the pins in use are all straight or push pins, as opposed to other types of pins like bobby pins, cotter pins, or bowling pins.

In the fill I especially liked GOOD ANSWER [Encouraging cry from “Family Feud” players], mostly because they always say that, even if they know the answer is the stupidest response imaginable. 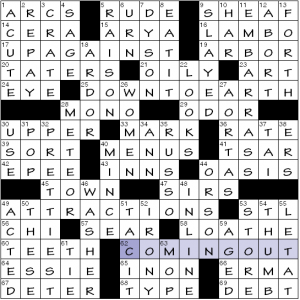 And by way of revelation:

Theme: Each theme answer has the word GAP in the center

When the central answer is a nine-letter word, you end up with twelve seven-letter words in the corners. I don’t usually think of a seven-letter entry as a long entry or a “bonus” but when there are twelve of them in stacks like that, they can get really hard to finagle. Erik filled those really cleanly, BRACKET (41D: Tournament diagram) and PICTURE (2D: Selfie, for example) were probably my favorites. 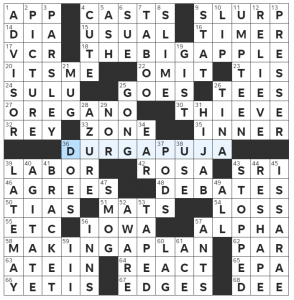 Chimichurri sauce is one of my favorite sauces (yes, “favorite sauce” is a frequent topic of discussion in my household, and yes we routinely settle on chimichurri being S Tier) so I loved the double shout-out with OREGANO crossing PARSLEY. Our recipe also includes cilantro and red pepper flakes, and we make jars of it at a time and then put it on everything.

It was great to get ISSA RAE‘s full name in a grid (45D: Founder of Hoorae Media), and the clue for MUG (21D: Hot chocolate holder) had big “Winter Is Coming” energy, for me. 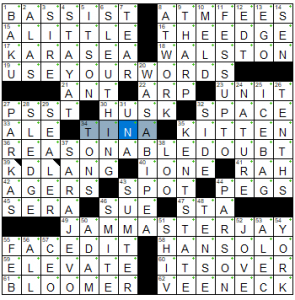 Satisfying resistance from BEQ today; I always like when I can drop in some long stuff to feel like I’ve made progress, and then work from there.

Today, I started with the *very* in-the-language USE YOUR WORDS (19a- Parent’s request to a tongue-tied toddler) and WASABI PEA (20d- Spicy Asian snack tidbit) off that. Is “spicy” appropriate to describe the wasabi/horseradish thing? It doesn’t hit my tongue like a chili pepper does, more overwhelms the nose. Maybe “pungent”?

For symmetry’s sake, JAM MASTER JAY (49a- DJ heard on “Peter Piper” and “My Adidas”) did not come as easy as USE YOUR WORDS, so clearly I need to listen to more Run-D.M.C.. I did nail KENT STATE (35d- Ohio University where DEVO was formed), though less from any DEVO love and more from sports fandom, picking up tidbits about your rivals over time.

This is a good example of a grid where a few crossings can go a long way; every sector’s got something that really held me up, most of which I have more to say in the notes. Plenty of proper nouns too, but none I didn’t recognize once they were filled in. I did have trouble in the western side, putting in SEAmER for SEALER (concrete has seams, right?), and never seeing KD LANG in the cross or recognizing the song in the clue (39a- “Miss Chatelaine” signer). I also didn’t love the TINA/UNA crossing (34a- Tony Award-winning role for Adrienne Warren // 31d- The Redcrosse Knight’s lady in “The Faerie Queene”) but -N- was my first guess and I suppose there’s nothing else plausible. 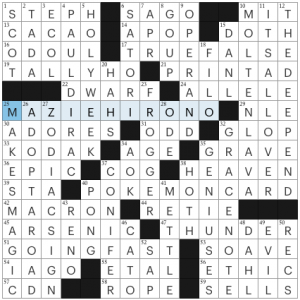 Fave fill: MAZIE HIRONO ([First Asian-American woman elected to the Senate]—it’s so bonkers than various “firsts” are still happening or haven’t happened yet. Sen. Hirono was took office just 8 years ago, and the Senate that has “so many women” these days is still 76% dudes and has never been below 74% dudes), POKEMON CARD, GOING FAST, MAKES MAGIC, ZODIAC SIGN, PAUL DIRAC, SATORI, FROGGER, GRACE NOTE, IT’S ALL OVER, and THE DEEP END.

Four stars from me. Happy Monday to you all!