Title: “Where Is It?”
Prompt: The meta for this puzzle is a song from 2018.
Answer: “Beyond” by Leon Bridges 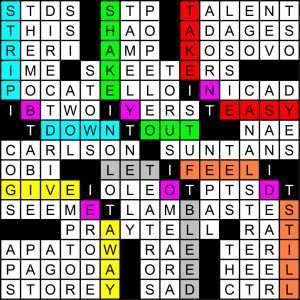 I’m 9-for-9 going into this month, but things aren’t looking good. No obvious theme entries in October’s MMMM, so this appears to be a classic Mullerian find-the-pattern-in-the-noise meta. And so far I ain’t findin’ it. 90 minutes until the deadline, so let me write out what I’ve been looking at and see if that jars the answer loose.

*** CARLSON and SUNTANS across the center share the SON/SUN homophone
*** SEE ME at 53-A is clued as [Repeated lyric in the Who’s “Tommy,” and then FEEL is in the grid, whis is also part of that repeated lyric, and then not heal but HEEL is in the grid as well.
***TELL in both POCATELLO and PRAY TELL
***Not a wide-open grid, but the short fill contains a lot of very common words, which I’m guessing could be from a song lyric. Such as THIS, EASY, DOWN, OUT, LET, GIVE, FEEL, SAD, STILL…

OK, wait a second. I circled all those very common, likely-to-be-in-song-lyrics, words, and I just now saw LET and BLEED in the grid, separated by two diagonally-connected black squares, which, if they were the letters IT, would spell the Stones album “Let It Bleed”…

OK, back (had some kid issues to take care of suddenly, which is why this post was late) but gotta hurry. The six song titles, as illustrated in the diagram at right, are STRIP IT DOWN by Luke Bryan, SHAKE IT OUT by Florence + the Machine, TAKE IT EASY by the Eagles, GIVE IT AWAY by Red Hot Chili Peppers, LET IT BLEED by the Stones, and FEEL IT STILL by Portugal the Man.

Last step: take the single letter that connect the two entries alongside the “IT” in they spell, from left-to-right in an undulating pattern, contest answer BEYOND, which I was unfamiliar with by which was Googles easily enough. Double fitting since the artist’s surname is “Bridges” and these letters form little bridges between the two parts of each entry.

Classic Muller meta! No obvious theme entries so you need to see patterns in the noise. Very tough to see (only 75 right answers) but once you see it you wonder why it took you so long. 4.90 stars and I’m 10-for-10 in 2021! Bringing it all the way home, baby! See you next month.