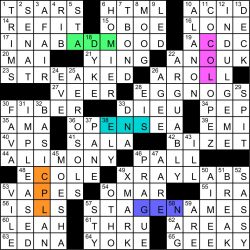 Good day everyone! Hope all is well with you and that you’re all getting your costumes and other decorations ready to get in the Halloween spirit. (Yes, I know there are those people who are already thinking about Christmas decorations at this point in the year. If that’s you, stop it!! Just kidding…I think.)

There are some soldiers and members of the armed forces in camouflage today, as in that the abbreviations of ranks in the military are included in the five theme entries, with the letters spanning multiple words.

Man, it’s been a while and a half since I’ve seen AL-ANON in a grid (10D: [“12-Step” support group]). Remember seeing that a couple of times when I started solving puzzles just over a decade ago, and think I hadn’t seen it since until right now! Seeing EGG NOGS already has me thinking that a) the holiday season will be here before I know it, and b) that I don’t think I have ever had a drink of egg nog ever in my life (28A:[Spiked Yule drinks]). Actually, I have…when my college roommate and best friend to this day was obsessed with drinking spiked egg nog on campus before flying back home to California. Can’t say that it was anything special. X-RAY LABS (49A: [Medical photo venues]) was the highlight for me of all the non-themed fill while one of its intersecting answers, PRAGUE, has me thinking that that might be one of the cities that I should put on my bucket list to visit (46D: [Czech capital, aka “The City of a Hundred Spires”]).

“Sports will make you smarter” moment of the day: MOOG (8D: [Synthesizer pioneer]) – A part of arguably the greatest dynasty in National Hockey League history, former goaltender Andy Moog was a member of three Stanley Cup-winning teams as a member of the Edmonton Oilers, in 1984, 1985 and 1987. He was mostly the backup to Hall-of-Famer Grant Fuhr on those teams, but then established himself as a big-game goalkeeper when he became a member of the Boston Bruins, helping the Bs make the Stanley Cup Final in 1988 and 1990. Coincidentally enough, both those Bruins teams lost in the championship series to the Oilers. Moog has the highest winning percentage of any eligible player not enshrined in the Hockey Hall of Fame (.580). 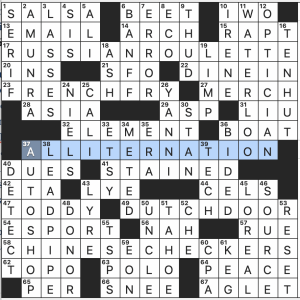 Pardon the discombobulation, but my iMac is in a mood (updating software) so I’m solving and blogging on a new laptop with a new download of Black Ink solving software (and I didn’t adjust my solving preferences beforehand so I kept typing in unexpected squares) and it’s been a long week already, hasn’t it? So quick recap on the puzzle.

The whimsical revealer is 37a. [Portmanteau coinage describing this puzzle’s theme], ALLITERNATION. The four themers are two word phrases consisting of a demonym (place-name adjective) followed by a noun with the same beginning sound (alliteration, with various nations’ demonyms): RUSSIAN ROULETTE, FRENCH FRY, DUTCH DOOR, and CHINESE CHECKERS. It feels cheeky to coin your own theme revealer! But it’s cute.

Tough for Tuesday: 2d. [Egyptian king of the gods], AMUN-RA. I had ANUBIS first, and it’s a good thing RUSSIAN’s U is crystal clear because the other god’s name can be spelled Amen-Ra and Amon-Ra, I think. Also: the old dagger SNEE is dusty crosswordese I would not expect to see in an early-week puzzle.

54a. [Counter-Strike of League of Legends], ESPORT. I didn’t know you could singularize just one E-sport.

62a. [Map with elevation lines], TOPO. I wonder which is more broadly familiar: shorthand for a topographical map or the tasty sparkling water brand, Topo Chico.

The title of today’s puzzle is a little off, but the revealer is more apt: CUTTING / CLASS (53a, [With 56-Across, indifferent student’s practice, and a hint to the puzzle theme]). The theme rows consist of two entries with circled letters on either side of a block. The circled letters spell out a seating class on a commercial flight. 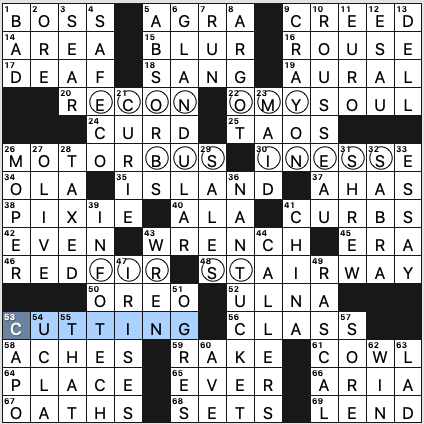 I got the gist of the theme by the second themed row, and the revealer cemented everything in place. Works well enough, but having to rely on an obscure song from a band few solvers will know as well as fusty crosswordese (IN ESSE) doesn’t bring joy to the solve.

Would it have been possible to do this theme with actual school classes? Maybe, but maybe not. SPANISH could be hidden in LIFE SPAN / ISHTAR. HISTORY in SUSHI / STORYTIME. But a lot of the most common classes would be hard to incorporate: ENGLISH, BIOLOGY, ALGEBRA, etc.

NANTUCKET, INFOTECH, and ROUSSEAU top the fill followed by PIXIE, ISLAND, and CRAYON. 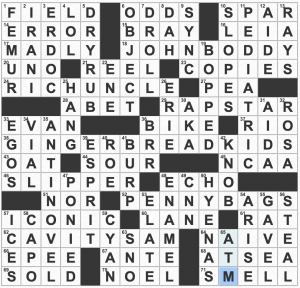 Really liked this one. Felt like a total throwback with those games, and yet most of the names (or parts of the names) eluded my.memory… fun trivia! It seems like this is the kind of category that might appear on trivia night at the pub, so good to have in your back pocket.

I initially thought the clue for Clue was asking for one of the (many) other characters in that game, not the one who no one thinks about (yet who is, oddly enough, a crucial character). All I can picture is Tim Curry, who actually isn’t Mr. BODDY of course. Also, never knew Mr. BODDY‘s first name was JOHN. Or that his last was spelled that way.

Didn’t know RICH was part of MONEYBAGS‘s name. GINGERBREAD KIDS is very cute… totally forgot that one. And the dude from Operation has a name?!?! I’m only just realizing how many times I operated on CAVITY SAM and didn’t even bother to learn his backstory. Terrible bedside manner.

Standard, if forgettable fill. If I had any nits I don’t remember them now. 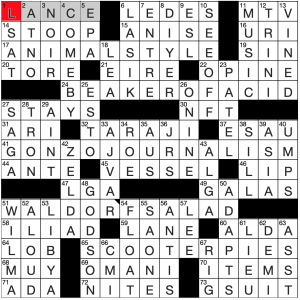 We have an AWESOME theme today, especially if you’re a fan of the Muppets, like I am!

The italicized openers to all the theme answers are names of different Muppets. And who doesn’t know the Muppets? Sadly, they are now owned by Disney, like everything else in the entertainment world, but that doesn’t take away from my fond childhood memories of watching The Muppet Show, which is where the title of this puzzle originates. I am in my happy place with this puzzle, despite the evil spectre of Disney! 4.8 stars from me!

I will stop there. Another Jonesin’ will be here next week! 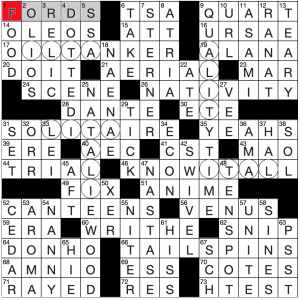 It has been a while since I have done a puzzle by Alan Olschwang, but we have a great puzzle with, including the revealer, a whopping SIX theme answers!

To the letters in the word TAIL are all jumbled around in each themer, giving you many “TAILspins”! Although these are four common letters, this is still a tight feat of construction. All in an enjoyable puzzle to boot! 4.6 stars from me.

Everyone have a safe and healthy week! Here is an earworm for you!

In a puzzle full of secrets, what’s not a secret is the delight of this fun grid, great clues, and excellent entries! Also, there’s a sneaky SPY that tried to HIDE as best as they could, and nearly made it unseen, at the very bottom of the grid. 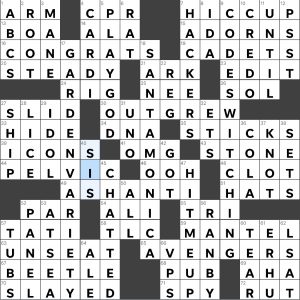 Theme: The first (or top) word of each themer is combined with the word “secret” to make new phrases.

I enjoyed the vertical themers paired with a creative title. It felt like I was cracking my own secret CODESWITCHING. This first themer is also a great entry in general and reminded me of the excellent NPR podcast Code Switch. The second themer makes somethings extraordinary from ordinary with secret GARDENVARIETY. The most extreme change comes from the last themer, procuring a jolly person from an equally sunny place: secret SANTAMONICA.

Stumpers: UNTIL (I really wanted “and so” to work), PLAYGOD (needed the crosses to fill the first half of this one), and UNSEAT (“usurp” and “oust” were all I could come up with)

Liked today’s puzzle? Trying to make some of your own? Intrigued by the process of constructing and publishing? Well, here’s one more secret: Erica included a fantastically detailed note about how this puzzle was made, including feedback from the editor Erik Agard on Sally’s blog today!