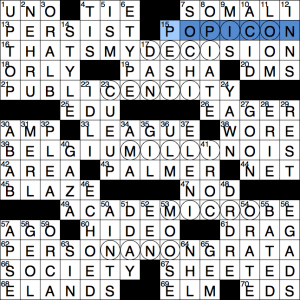 hello and welcome to episode #697 of matt gaffney’s weekly crossword contest, “Further Diminishment”. for this week 2 puzzle of TENTH MONTH, the instructions ask us: Which entry in this grid is the hidden sixth theme entry? well, let’s start with the five non-hidden theme entries, the long across answers:

so the first thing i noticed was MICROBE in ACADEMIC ROBE and LICE in PUBLIC ENTITY. aha! it’s about hidden parasites!

it is not about hidden parasites.

i very much enjoyed this meta, as it tickled the part of my brain devoted to scientific nomenclature and terminology. i think the small prefixes are a little less well known than the large ones, and this certainly extends to the answer, as tera- is relatively common because people are familiar with terabytes as a unit of data storage but pico- gets rather less play.

other bits i enjoyed from this puzzle:

also of relevance: matt clarified on the blog post for this puzzle that there won’t be an overarching meta-meta for TENTH MONTH, just that all of the themes will be related to or inspired by the number 10 (including this one, of course, based on powers of ten). that’s good to know, because i was totally lost trying to figure out the connection between MOZAMBIQUE and POP ICON (and in fact, was a little surprised because i was expecting this week’s answer to also have ten letters). so we can relax on the meta-meta idea and just look forward to three more cool puzzles.