Now this is a fun, original theme. Each theme entry consists of two words that sound like opposites, but the second one is actually a homophone. Wackiness ensues. 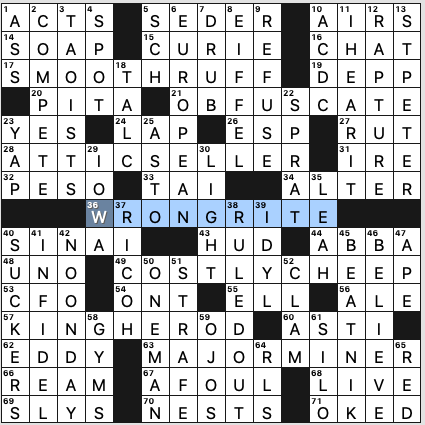 I grokked the theme with the first theme answer, but not immediately. It took a few glances in between other entries for the penny to drop, but then I got to enjoy the aha moment. An enjoyable time.

Loving the fill, too: KING HEROD, OBFUSCATE, “I HEAR IT,” RAPTURE, ST PETER, INFIDEL, SUCKERS, BEATNIK, RULED OUT, Cher’s BELIEVE. That’s a lot to like.

I also like NOONDAY, but maybe not with that clue [When many have lunch]. On the rare occasions that I see that word, it’s almost exclusively as an adjective, as in noonday sun or noonday meal. The online dictionaries also list it as a noun, so I can’t say the clue is wrong. 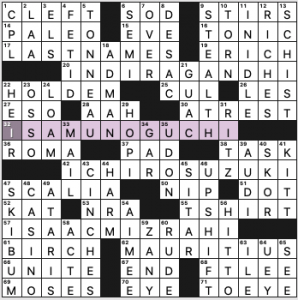 I really liked this theme, though the three-piece, cross-referenced revealer was a tad irksome. 65d. [With 70- and 71-Across, agree … and a phonetic hint to this puzzle’s theme] clues SEE / EYE / TO EYE, and the four themers are notable people whose first/last name combos start and end with the letter I:

Nice assortment of subjects, with people from history, art, sports, and current TV/fashion. I do like names in my crossword, so this theme’s right up my alley. 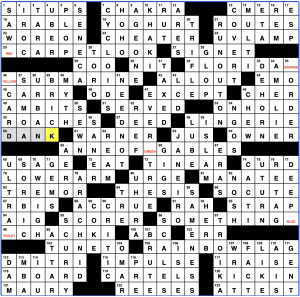 Today’s AVCX isn’t the first puzzle I’ve seen with its theme, but Richard and Will do it well. It’s a full Sunday-sized grid AND has rebus squares, so you may want to click on the image to see the full fill on some of these.

And since these are rebus squares, they also work with the down clues:

Again, it’s not the first RAINBOW FLAG theme I’ve seen, but it’s a really well-executed one and I had a great time solving this even after I had spotted what was going on. 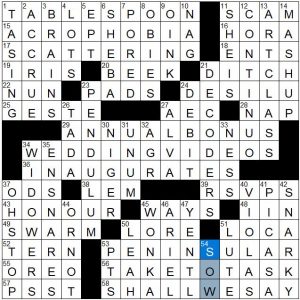 Fun grid from Liz Gorski today, that played a little harder than the past few Wednesdays, I think. I have a bad habit of getting a foothold in the NE corner and then having to work into the grid with only the backs of many words – it made the middle stack particularly tough to see.

Speaking of that group, really fantastic clue for WEDDING VIDEOS (34a- Bond films?). Even with the question mark indicator, it took me awhile. And it didn’t help that NIGER (30d- Algeria neighbor) was my third attempt at a five-letter North African country, the first of which doesn’t even border Algeria.

In fact, so many enjoyable clues in this one that I’m going to jump right to notes, because I’ve got a bunch: 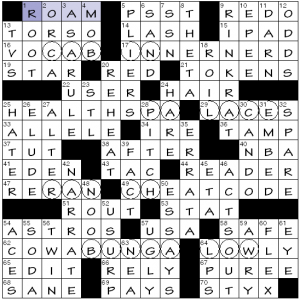 In the case of this puzzle, it’s the title that resolves the theme. Why are the (circled) names of buildings split like that? House-broken, natch!

So it turns out that the buildings are more specifically houses, as per the title. Theme works fine for me. 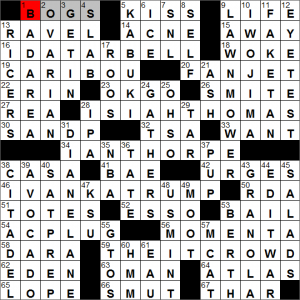 Today’s puzzle by August Miller is explained at the final entry, THEITCROWD. I was surprised to see that, as I thought they had at best a niche audience in the US. Nevertheless, the revealer is apt as each of four people begin with the initials I.T.

Both in the top-right, there were two particularly fun clues: [Blades that cut blades] for LAWNMOWER; [Evaluation with a capital E] for EYETEST.

Theme: Each theme answer has WED and MON in it, which are abbreviations for two days of the week, Wednesday and Monday. 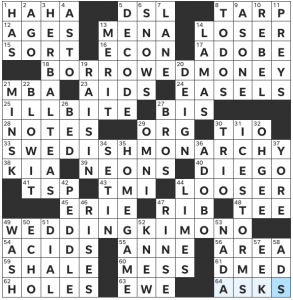 I’m somewhat split on this theme. On one hand, it goes well with the “Doubleday” title, each theme answer has the days arranged the same way which is nice for consistency (“wed” in the first word, “mon” in the second), and the puzzle is published on a Wednesday, so that’s fun and meta. On the other hand, why is Monday the other day? Is it just because there were the best phrases with “mon”? I almost wish the puzzle had done theme answers using abbreviations of all the days of the week, although with there being 7 of those they wouldn’t have fit nicely into “doubles”. I love WEDDING KIMONO, but BORROWED MONEY is a little boring to me, and SWEDISH MONARCHY felt somewhat arbitrary as a phrase.

Aside from my issues with the theme, I enjoyed this puzzle. Y’all know I love a Minnesota reference, and I’ve even attended a game at Target Field, so HOME GAME was a total gimme for me. I also loved I’LL BITE and BLOWS IT. Some of this puzzle felt a little repetitive to me – there were multiple answers with similar clues (see ICE STORMS and SNOWS both clued as [Winter weather events] and RINSE and WASH clued as [Remove soap from] and [Use soap on]). There were also some similar words in the puzzle like ADOBE and ADOBO. I didn’t mind any of these individually (especially things like ADOBE/ADOBO, which are very different despite being spelled similarly), but all taken together it was a bit much.