Theme: The circled letters in today’s grid comprise words that can precede “knife.” Each set of circles is in a zigzag pattern going down and to the right. This “twist” is the subject of the revealer TWIST THE KNIFE (37a, [Increase someone’s distress, as exemplified by the circled letters]). 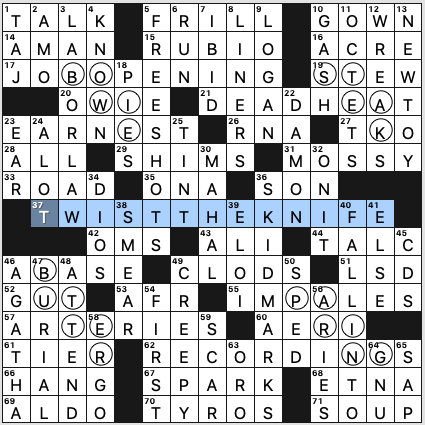 The knives in question are BOWIE, STEAK, BUTTER, and PARING. All but one of them can be found in most kitchens.

Does the pattern of circles feel like a twist to you? I’m not 100% sold on it. To me, it just seems like the words are written at an angle. But once I realized they’re in more of a zigzag formation, I felt a little better about it.

I think I’d have been okay with “twist” being used to indicate an anagram—cryptic-style. For example, STEAK is anagrammed in ROCKSTEADY and BOWIE in BIOWEAPON.

But that’s another theme for another day. This one did the job in that it helped me sort out a couple of the groupings. I got STEAK just off the K and BUTTER of the TE.

Without any long theme answers, there’s a boatload of long fill, the best of which includes FREE SHOTS [Prizes at a bar trivia contest, perhaps] (which I briefly had as FREE SHOES—huh?), SKID MARKS, DEAD HEAT, and JOB OPENING. 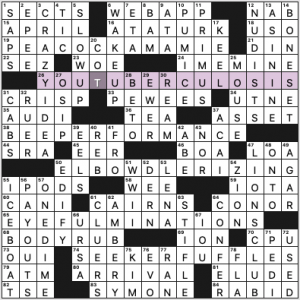 This 17×17 puzzle makes space for six long themers, each one a portmanteau with 3 or 4 overlapping letters between the words that are joined. The results are clued reflecting both word components: 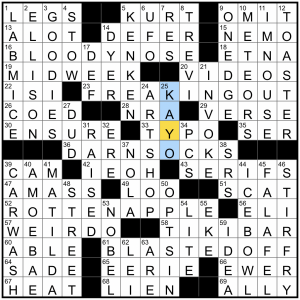 Another week, another Thursday NYT I’m just kind of lukewarm on even though I see what’s going on.

If this puzzle had a title, I suspect it’d be something like “Curse Words” – BLOODY, FREAKING, DARN, ROTTEN, and BLASTED are all used as the LITE curses they can sometimes be used as, giving new meaning to otherwise standard phrases.

This is the wrong SADE, I know (we wanted the Marquis de), but roll with me here.

elsewhere: I’m not sure I can get behind spelling out KAY-O as legit fill, but it was nice seeing IEOH Minh Pei’s full first name spelled out in the grid.   TIKI BAR is delightful, as are AMOEBAE and MATILDA.

Theme: Each theme answer begins with a hard material. 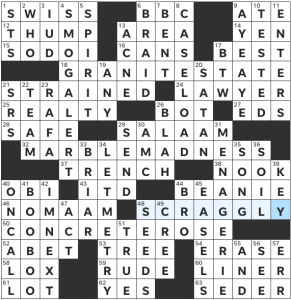 This puzzle’s theme feels like a shout-out to those of us who have solved Stella’s puzzle’s before – I can honestly say that this is the fastest I’ve ever gotten through something she’s created. (For those unfamiliar with Stella, check out her blog Tough As Nails for puzzles that are, uh, definitely not USA Today-level). That level of meta elevated the puzzle for me, although it’s not a bad theme by any means, just a basic one. I’m more familiar with Angie Thomas’s novel “The Hate U Give”, so it took me a few crosses to get CONCRETE ROSE, although I have heard of it before. I also didn’t know MARBLE MADNESS, but it’s a very snazzy answer and I like that it disguises the material meaning of marble.

Theme: Each of the themed answers incorporates “lay” in its pronunciation, literally re-LAYing in each theme answer. 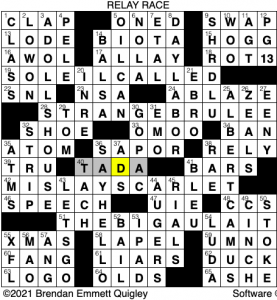 As always, this was a clever theme. I wish the title pointed a bit more clearly to it (though feel free to disagree with me here) since it didn’t really feel like LAY and its homophones were emphasized enough in the theme answers. Now, it didn’t help that I didn’t know how to pronounce “au lait” until right now, but I do also feel like it was lost a bit in SOLEIL CALLED whereas it was the end of a word in each of the other theme answers. However, I did love that LAY in its referenced spelling was only used once.

I also felt like some of the clues today were a bit clunky or just slightly off. For example, 36d is clued as [“Greets”], indicating a SAYS in the answer. Instead, it’s SAY HELLO. Additionally, I thought it was interesting that 12d [“Like ‘No Time to Die’ or ‘Venom: Let There Be Carnage’”] including the number in PG13 while 5a [“Fourth apartment on the ground floor maybe”] didn’t do the same, though I loved that ONE D was clued this way, since I usually see it in reference to the band.

Overall, I thought that this puzzle was tough, but I appreciated the wordplay and the sound-focused theme.

THEME: Words that can precede “BAR” are at the perimeter of the puzzle. 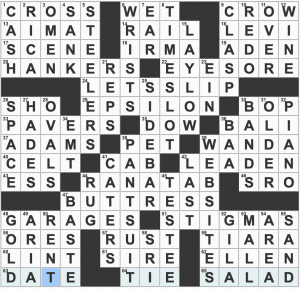 Nice over-the-plate familiar-ish theme type. I don’t think of DATE bars that often, or TIE bars for that matter, but everything is solidly in-language. Some of the bars refer to actual pub type settings (CASH, WINE, PIANO) and some don’t, which I’m only noticing now, so clearly it didn’t bother me that much.

Revealer was a gimme :) I like that once in a while though.

Quite a bit of longer fill, yet nothing that jumps out at me.

Hard for me to get used to TESTEE as a word. I think I prefer TEST TAKER.

Thanks for this one! 3.4 stars 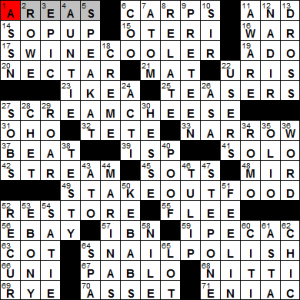 Today’s puzzle by Jim Holland has a fairly simple, nigh infinitely repeatable, concept. Add S to the beginnings of theme phrases and create “wackiness”. It felt more like an abbreviated Sunday theme idea. Given the many options available, Mr. Holland chose wisely. In particular the clue/answer combinations for SWINECOOLER and STAKEOUTFOOD are evocative.

The grid design was quite conservative, with few long phrase-type answers and most of the difficulty introduced with a few less inferrable names such as ROMO.