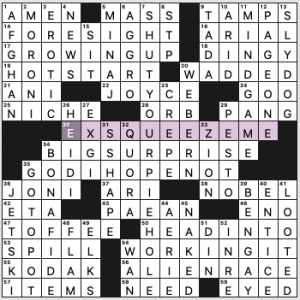 Lively 68-worder to kick off the weekend. Fave fill: FORESIGHT and GROWING UP, not splashy but good; the conversational middle with “EXSQUEEZE ME?”, a possibly snarky “BIG SURPRISE,” and “GOD, I HOPE NOT” crossing the 15 “SHUT YOUR PIE-HOLE”; WORKING IT, JETSKI, and MIND GAME.

Theme: Each themed answer refers to an English Premier League team by their nickname from the start (the “kickoff”) of the phrase. 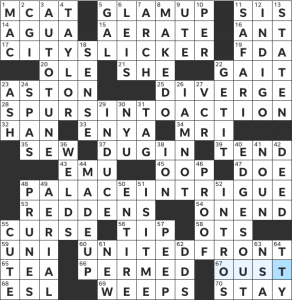 *Fair warning: I did notice that other teams include “United” or “City” in their name, so forgive me if I’ve messed up the lingo here!*

I was just talking about how I only know that the Spurs exist because my friend is a huge Liverpool fan and several of his buddies are Spurs fans, so this is a very appropriately timed theme in my life, I don’t know about you. It’s a whopper with four themed answers, one of which is 15 letters (SPURS INTO ACTION). CITY SLICKER and UNITED FRONT are both 11 while PALACE INTRIGUE is a clean 14. They’re also all really solid colloquial phrases, though I think PALACE INTRIGUE is my favorite; it’s a nice balance between a phrase I’m familiar with but only encounter once in a blue moon.

Overall, I felt like this grid did a nice job. It’s economical with its black squares and really feels like you aren’t moving constantly from short answer to short answer while also still having those bursts of three-lettered answers that help move you through the puzzle. I slowed around the REDDENS – ON END lines but then felt like I blinked and had the bottom left corner filled without even hitting the keys. It’s an asymmetric grid (someone feel free to correct me here!), which I thought was interesting but it allowed for both this flow and the differing lengths in theme answers.

Some Friday faves include:

Overall, a really fun puzzle! I’m curious how many folks will pick up on the Premier League references, but I’ve always found that fan sneak up on you! After all, you never walk alone ;) 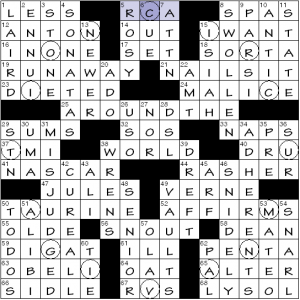 Quite a few moving parts (?) to this theme, so let’s have a look about. First of all, left-right symmetry for the grid. Then:

Once it’s laid out like this, the absence of the rest of the title—”Eighty Days”—is notable. On the other hand, that would be asking for a 15×15 grid to do way more than it’s reasonably capable of. I wonder if the original proposal for this crossword was for a Sunday-size 21×21, as that would be the precise anniversary of the film adaptation’s release.

Theme answers have a FAIRY TALE ENDING (58a, [Grimm fate? … and a hint to the last words of the starred clues’ answers]). In other words, they end in—collectively—the title of a certain fairy tale. 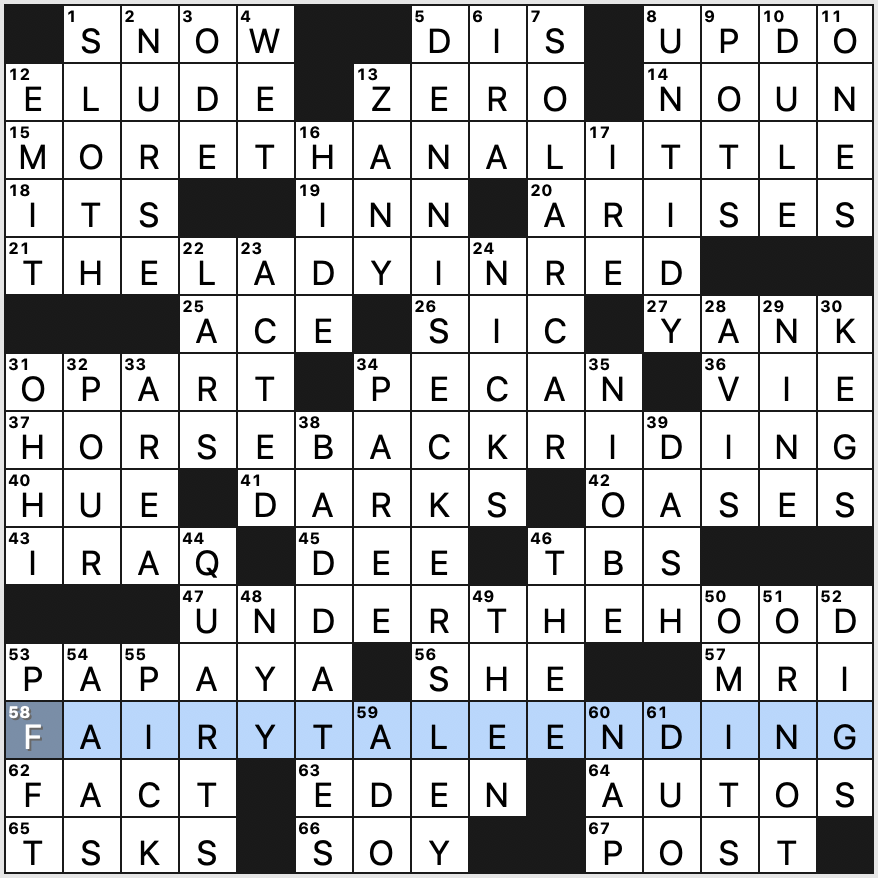 Very nice theme. I couldn’t sort it out on my own at first, so it was nice to hit the revealer and get the aha moment. Fun theme choices, and the three grid-spanners are impressive.

And there’s a fourth one as well, DENNIS ECKERSLEY at 5d, one of the few baseball names I know since I only paid attention to Bay Area baseball in the late ’80s. I even spelled his name correctly! SOLAR CAR and  BAD DATES are solid as well.

Simple, but impressively-executed theme and a strong grid to back it up. Four stars. 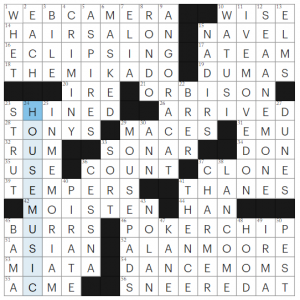 Good morning solvers! This was on the trickier side for a Friday New Yorker for me, but on the easier side for a Patrick Berry New Yorker puzzle for me. Kinda dazzling layout with those chunky 4×9 stacks in two of the corners, and the Ls dancing around the center. So much of the long fill was really fun stuff.