Hidey ho! Jim P. here sitting in for pannonica who is otherwise engaged. 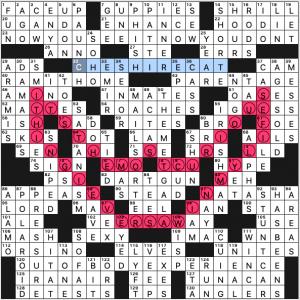 The title had me thinking about taxes, but there’s not a clue about George H. W. Bush in sight. Instead we’re greeted with a grouping of circles (or shaded squares depending on the version of the puzzle you get) which appear to be in the shape of lips. And in fact, we’re told they belong to the CHESHIRE CAT (32a, [Character whose incorporeal grin prompted the quote in the shaded spaces (reading upper and then lower arcs, left to right)].

Those arcs spell out IT’S THE MOST CURIOUS / THING I EVER SAW IN MY LIFE. Here’s the full quote:

“I said pig,” replied Alice; “and I wish you wouldn’t keep appearing and vanishing so suddenly: you make one quite giddy.”

“All right,” said the Cat; and this time it vanished quite slowly, beginning with the end of the tail, and ending with the grin, which remained some time after the rest of it had gone.

“Well! I’ve often seen a cat without a grin,” thought Alice; “but a grin without a cat! It’s the most curious thing I ever saw in my life!”

I would never have recognized that quote, but I thoroughly enjoyed this for its inventiveness and fun. I’m impressed with how our constructors managed to build the smile, especially at the corners of the mouth which comprise SMITHIES and CASEFILE. There’s a slight hiccup in the middle of the upper lip with the raised S, but otherwise it’s an impressive feat.

Oh, and by the way, not to be forgotten are two extra-sparkly, extra-long, theme-related entries: NOW YOU SEE IT, NOW YOU DON’T (a rare 21-letter grid spanner) and OUT OF BODY EXPERIENCE. Very nice touches indeed.

Lots to like in the fill, some of which cross both sets of lips, namely MAIL SORTER, THE MET GALA, SATANISM, and IRISHMAN. Elsewhere we have RAM IT HOME, PARENTAGE, POLAROID, STUNT CAR, HAS-BEENS, and DART GUN. 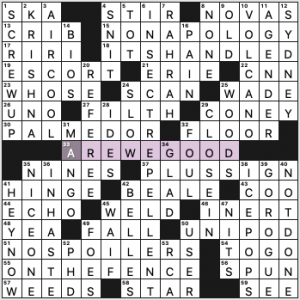 This puzzle’s right up my alley, with so many entries and clues that I appreciate. Starting with that NON-APOLOGY (15a. [“Sorry if you were offended,” e.g.]) and flowing through the PALME D’OR, “ARE WE GOOD?”, the PLUS SIGN following LGTBQIA, “NO SPOILERS!”, ON THE FENCE, SCREW UP, “HEY, NOW!”, KRISHNA, a Philippines shout-out for MANGO, ICE POPS, and GO ROGUE. Are we good here? Yes. Yes, we are.

4.5 stars from me. Onward into the weekend! 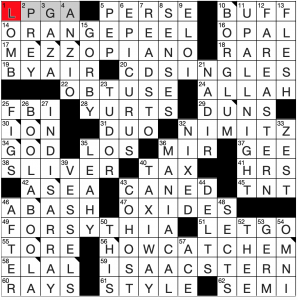 The Lester Ruff puzzles are usually “less rough,” but I found this one really tough. I am getting dumber, I think! Look at all the errors in this grid! I think I may be stressed out from work; that’s my story and I am sticking to it! I am taking a long weekend next week to recharge, so hopefully that will help! I will charge my Kindle and take a few puzzles along! But nice puzzle, Stan! 4.3 stars from me. 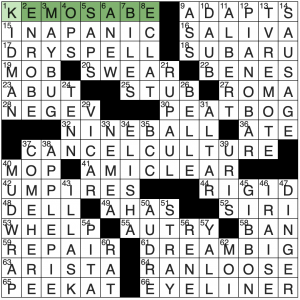 We have a new name in the database! If this is a debut, congrats! Not too hard, but still thorny enough for a Saturday LAT puzzle. Nice to see the timely CANCEL CULTURE right across the middle of the grid, as that has come up a lot in recent times. The moral of the story is don’t write anything you might later regret, which is what they have been saying since I was a child! I had a little trouble in the SE corner, but all in all a fun puzzle. Feel free to make more puzzles, Bill! 4.4 stars from me. 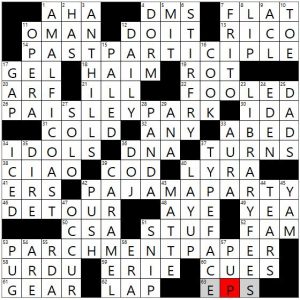 Is this a print debut for Jess Goldstein? I know her blog Cross Angel: Mind Freak, and thought I’d seen her on other sites, but she’s not in our tagging system here. Until today.

Four fun, colorful theme entries, nice to see when (I think) you wouldn’t be too constrained in finding phrases that fit the bill. I was particularly surprised that I could drop PAISLEY PARK with no crossings. Don’t know where that’s been living in my brain!

I have to be quick today, so no notes. Enjoy your weekend! 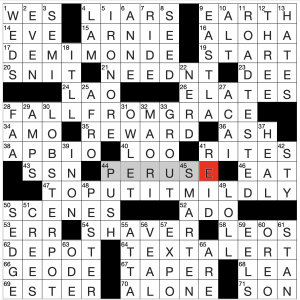 Fun phrases and nifty hidden word idea. I like how we’re not simply hiding the same word again and again. The revealer is doing a little extra duty in trying to tell the reader that they need to be “on ALERT”… If I were a betting man, I think that’s to avoid using circles, which most puzzles like this one would have. Hey, as long as they’re not asking me to count letters and mentally circle, I’m a happ(ier) guy.

LOBSTER BIB for LOBSTER POT caused me to stumble and I never quite recovered, clocking in at over 5 minutes. Is “IT’LL be a cold day…” a phrase? I think “… in hell” is missing, and I feel like it needs it.