The other entries are familiar phrases that hide synonyms of NOTHING. 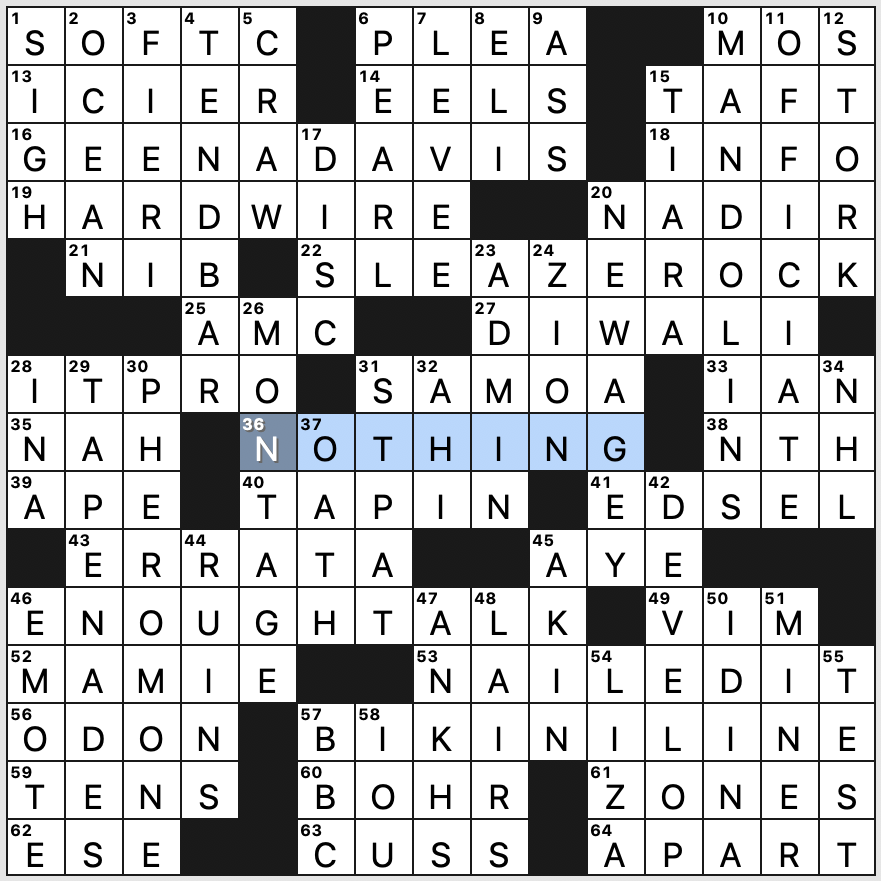 Fun choices and one of the cleverer hidden-word themes I’ve seen in a while. As I said a few days ago, hidden words with the same word hidden in each phrase are far less engaging than one like this which holds your interest throughout the solve.

But what elevates the puzzle is the stellar fill: HARDWIRE, “NAILED IT,” TEND BAR, MANDOLINS, OFFICIATE, TAPENADES, PHEROMONES, MONTAGE, DIWALI, and even NEW AGEY. Everywhere I looked there was something to like, and I just found myself grinning as each lovely entry fell. 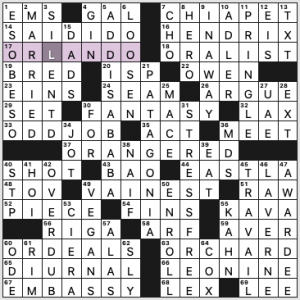 Quick summary: In this puzzle with twenty 7-letter answers, four of them plus a 9 are thematic. Each themer reinterprets a word or phrase starting with OR- as if the word OR stands apart from what follows:

Some nice fill throughout, like PATAGONIA and LAVERNE / COX. 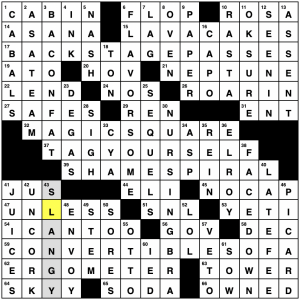 It’s a themeless week at the AVCX!  Sophia Maymudes and Paolo Pasco co-created this one – let’s dive in!

That’s it for today.  Happy Wednesday! 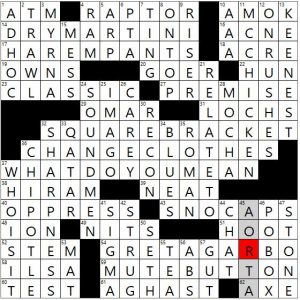 Another tougher Wednesday this week – I got held up in both the top and the middle. But in the end, there’s the typical Patrick Berry smoothness.

Two-thirds of the middle stairstack utterly baffled me, but they’re great clues: For SQUARE BRACKETS (32a) it’s [One of a pair that often gets sic?], and for 36a CHANGE CLOTHES it’s [Switch gear]. Much like how we may differ in where we put the stress in pronouncing “West Point,” I just could not figure out what was going on with “Switch Gear.”

WHAT DO YOU MEAN (37a- Huh?) was an absolute breeze by comparison. I also had trouble parsing HAREM PANTS (17a- Look-alikes of bloomers) from the first four letters, even though we often see HAREM clued this way in puzzles.

To the extent there are ever many proper nouns in a Berry grid, there’s a clear in-group today. We’ve got MYRNA Loy (3d- Portrayer of Nora in “The Thin Man”), CAREY Mulligan (26d- Portrayer of Cassie in “Promising Young Woman”), Ingrid Bergman’s ILSA (58a- Film character who says, “With the whole world crumbling, we pick this time to fall in love.”), and GRETA GARBO (54a- Woman featured on Sweden’s hundred-krona banknote), though I do love that clue. It may not be helpful to tally things up like this, but it was more than noticeable to me during the solve. Bessie Smith makes an appearance in the BLUES clue (34a- Bessie Smith’s genre), but it doesn’t do much for me for balance. 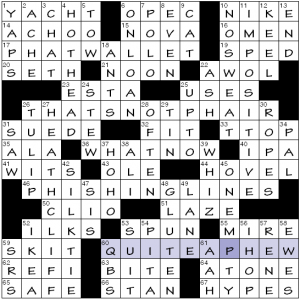 Kind of a basic theme, but the acid test is whether it’s an enjoyable solve. pHrases containing a word beginning with F substitute it with PH and, without need of changing any other spelling to maintain homophony, wackifies the results.

A more difficult, constrained construction (and very likely a steeper solve) would have been to eliminate all Fs from the grid, which is by no means necessary for a successful crossword. It’d be more of a flourish.

That’s all I’ve got today, and it’s good to be back.

Editor: Erik Agard
Theme: Each theme answer is a person with a term of endearment in their name 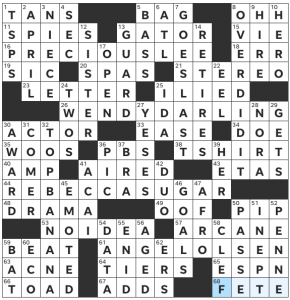 I only knew one of these people (WENDY DARLING) off the top of my head, but it was fun to uncover everyone else’s names. It’s a nice touch that two of the terms of endearment are in the first name, and two are in the last.  Keep an eye out for these new cluing angles for LEE and OLSEN!

The symmetry of this puzzle is alllll over the place, and I am not sure how I feel about it! On the one hand, there’s no reason why a crossword necessarily has to be symmetric, and sometimes symmetry hampers good themes that don’t happen to have answers that are the same length – today, PRECIOUS LEE and ANGEL OLSEN don’t have the same number of letters. At the same time, though, I appreciate symmetry because it feels elegant and imposes more restrictions on the constructor, which can sometimes lead to a more satisfying end product if they can still create quality art within those bounds (at least for me personally).  I also like that having a defined structure means that breaking the rules of symmetry means something – whenever I see an asymmetric puzzle, I immediately start looking for the “why” of it, which can help bring to light creative themes. I’m curious to hear other folk’s takes on this. 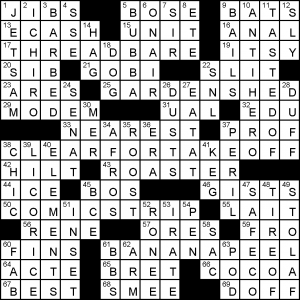