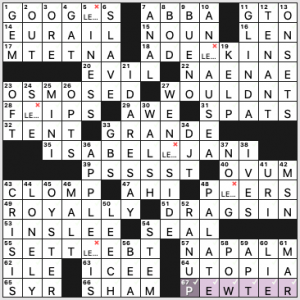 An ambitious two-way rebus theme with an elegant rationale, but ultimately I found it quite unsatisfying. For starters, the revealer is PEWTER, 67a. [Alloy you have to create six times in this puzzle], but really only the pewter of antiquity was made with lead, and now it’s an alloy of TIN and several other metals. The rebus squares “alloy” LEAD in the Across direction, TIN going Down. Here are the entry pairs … and I went with just an L instead of LEAD for the longest time:

It seems like Peter was seeking to make the puzzle as impenetrable as possible, with things like a papal clue for ABBA (7a. [“___ Pater” (1999 album on which Pope John Paul II sings)]) crossing a tricksy clue for BOD (8d. [A well-built one has traps that are easily seen], meaning trapezoids) crossing ADELE ADKINS clued without a song title. There’s also BEA clued as 56d. [Singer Miller with the 2015 debut album “Not an Apology”]—the album charted OK, but my job is pop culture and I’ve never heard of her (she’s never had a hit single). When the rebus angle is on the hard side, these things and dry shampoo brand PSSSST (not sold at Target but available at Walmart) left a bad taste in my mouth. Peter, we know you work hard to never repeat a clue, but come on, the title of a pope’s album is willfully obscure!

Between the needlessly difficult vibe, the “wait, it’s tin and lead?” issue, and some dry patches in the fill, I’m not a fan of this one. 2.75 stars for the lack of fun I had. 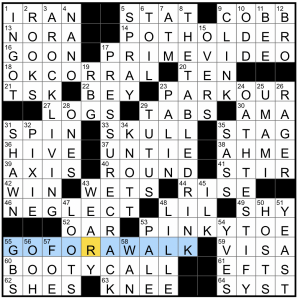 Today’s NYT has a theme I feel like I’ve seen before, but the main wordplay idea happening is still charmingly executed:

First off, snaps for a down-based theme.  Given the positioning, we have a literal “under” in each of the phrases – LIVING under A ROCK, DRINK under THE TABLE, CRACK under PRESSURE, and TESTIFY under OATH.  This literal-minded sort of thing doesn’t feel new, but utilizing the down clues and the particular execution of this one are worth kudos!

elsewhere: I totally thought “Where to find Amazon’s streams” would be something about gaming site TWITCH, but it’s actually just PRIME VIDEO.  BOOTY CALL: the opposite of a butt dial.  UMAMI – prevalent in mushrooms and tomatoes, it’s also in things like parmesan cheese.

After yesterday’s fun grid, this one…well, it just wasn’t for me.

The theme is familiar phrases with the bigram HA preceding them, creating something new and crossword-wacky. 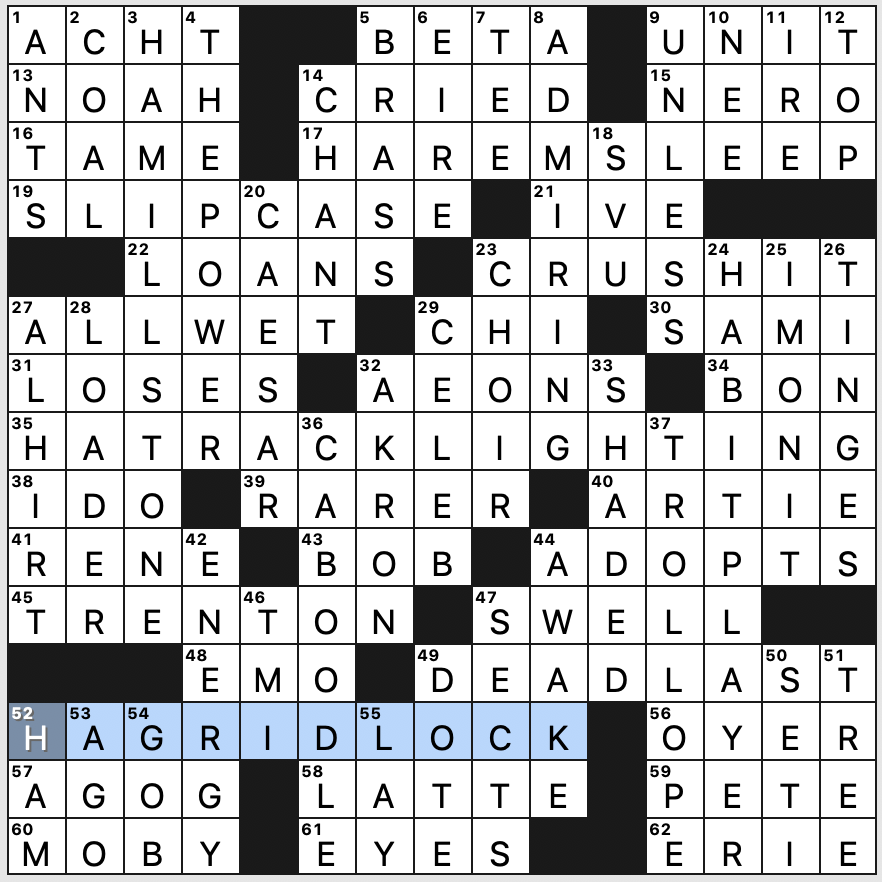 Despite the title and theme, I didn’t find myself laughing at this one.

The fill was a mixed bag. I loved CABOODLE, DEAD LAST, “I’M ON IT!” and CRUSH IT, but then there were sections like the SE where proper name ARTIE [Bears cornerback Burns] crosses proper name TROLLOPE, 19th-century English [“Barchester Towers” author] which crosses whatever OYER [___ and terminer] is. Luckily I guessed right at each crossing, but the fact I had to make guesses is not ideal.

I wish I could have chuckled at this puzzle, but it was not to be. Three stars.

Theme: Each theme answer is a phrase in the form of “[baked good] IN THE [thing]” 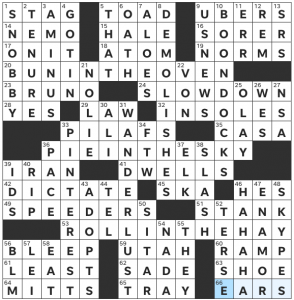 I had no idea what this theme would be from the title of the puzzle, but I’m into it! It’s a nice tight set – I’ve never thought much about how these distinct phrases could all fit the same theme, so figuring that out was satisfying. The phrase PIE IN THE SKY reminds me of my Grandma, so I’m partial to it. ROLL IN THE HAY is a bit of the odd one out here as ROLL is used as a verb rather than a noun, but given that it was placed at the bottom of the puzzle I appreciated having to use the other answers to figure out the format of the last one.

So much good fill in this puzzle – the long downs PINTEREST, WANDERLUST and DEMOLISHES are all great. I have not watched The BOONDOCKS, but it looks like a revival is coming out next year on HBO Max so maybe I’ll check that out.

Theme: Each themed answer includes a reference to a squid while also being linked to the Netflix series SQUID GAME. 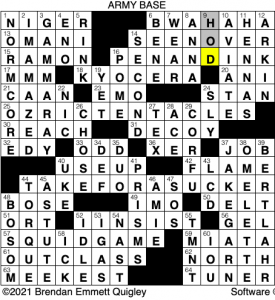 Not having watched SQUID GAME, I was up a bit of a creek with some of this, but that’s more of an issue of me not having enough time to watch than it is with this puzzle. I appreciated that each themer included a bit of a squid, which I presume has to do with the “Army” bit of the puzzle’s title. By including SQUID GAME as the revealer, I love the potential for this puzzle to be a cultural artifact that reflects what’s popular in our society right now. I do a lot with pop culture as part of my grad work, and so that’s mostly my nerdiness coming together, but it’s also something I regularly think about when doing puzzles.

Speaking of this, while I love James CAAN, having watched him on Las Vegas, he is also one of nine white men: James CAAN, Brian ENO, Adam ARKIN, JAKE GARN, BERT LAHR, RAMÓN Estévez (aka Martin Sheen), NIC Cage, Thomas NAST, and Darth Vader (yes, I’m counting him via 20a [“Darth Vader, in his youth”] ANI). ANNA Konkle of 8d [“‘PEN15’ co-creator Konkle] is the only woman referenced on her own while 46d [“Tours girlfriend”] AMIE is also clued in relation a man (and I’m not sure who/what this refers to?).

I will say that I I loved the grid here. The longer answers in each corner made this 74-word grid really fun. As a solver still struggling through Thursday/Friday/Saturday NYT difficulty, I’m trying to pump myself up more when I see longer answers because they can be intimidating. However, I thought that, in this grid, 6a [“Evil villain’s laugh”] BWAHAHA, 2d [“‘Wow, just…wow!’”] I’M AMAZED, 3d [“Radioactive decay emission”] GAMMA RAY, and 38d [“Fluffy breakfast”] OMELETTE were all a nice reminder that longer doesn’t always mean more difficult. (Though, tragically, I did first fill in PANCAKES for 38d).

That’s all from me for today folks! Thanks for taking a SECOND (14d [“Fast-moving hand”]) to read through this!

THEME: Rhyming two-word phrases where an animal is the second word. 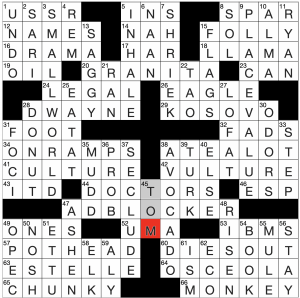 I’m almost positive I’ve seen this theme before. Perhaps even more than once. But something about this grid made it feel so fresh and clever. Looking at the themers themselves, they’re nifty sounding and fun to say. They all share the same iambic pattern, and they’re lively and modern(ish?). DRAMA LLAMA was particularly enjoyable as I changed LLAMA from MOMMA which I changed from QUEEN. It could also be the funky L/R symmetry of the grid and the placement of the themers (not often you see one in row 15 like that). I like how the two words were separated consistently.

Excellent entries in the grid all around like SMALL WORLD!, POTHEAD, and AD BLOCKER.

New for me: OSCEOLA. Needed every (more-than-fair) cross for that, and MUDD.

GRANITA is also new for me. And, in my opinion, I found the T in TAO to be a Natick. I’m never sure with ?AO if the ? is a T, L, or M. Anybody else really want to change it to GRANOLA?

Like the fun fact for STEP [One of 272 at Batu Caves] and the incentive-shout out for DONUT [Krispy Kreme freebie for vaccinated people].

4 stars. Thanks for that one! 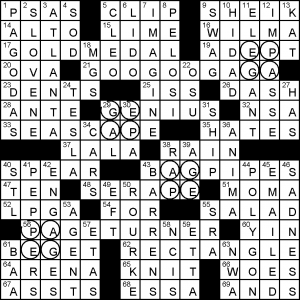 Sam Acker’s LA Times theme is not the most common theme type, but a fairly simple example of that genre. The revealer is PAGETURNER, and the letters in PAGE appear four times in sets of four circles, with, from top to bottom, each making one clockwise rotation each time.

The downside of this theme type is the lack of marquee answers beyond the revealing PAGETURNER. An attempt has been made to keep the medium-length entries engaging, with GOOGOOGAGA, SEASCAPE and BAGPIPES included.