Welp, guess I was wrong about having Halloween-themed puzzles for the rest of this week. This one’s about stretchy things stretched out to span the grid. 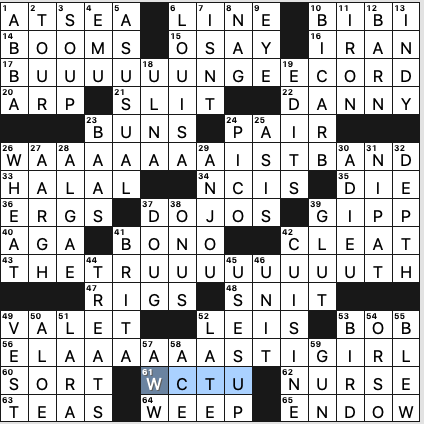 I like the idea here, but as a solver, the number of “stretched” letters felt random. Maybe I could’ve realized that we were going for grid-spanners, but during the solve, that didn’t register. Which letter got stretched also feels random, other than the fact that they’re all vowels. Relatedly—and maybe this isn’t fair—but I wanted the stretched letters to spell something appropriate (a stretchy sound, perhaps?), but I can’t come up with any reasoning behind why U, A, U, and A are the letters in question.

The fill isn’t especially sparkly, but CUISINE and “AS USUAL” are nice. However, the puzzle lost me when I got to 61a [Org. that supported Prohibition]. This turned out to be WCTU which is just a collection of random letters to me. I discovered it meant the Women’s Christian Temperance Union which, per Wikipedia, aims “to create a ‘sober and pure world’ by abstinence, purity, and evangelical Christianity.” Yeesh. I can see why this entry hasn’t been seen since 2014. The other reason may be that, again per Wikipedia, worldwide membership of the WCTU stood at a mere 5,000 as of 2012. This entry is in such a small, easily-reworked section of the grid that I’m surprised it stayed in. It didn’t take me long to replace it with MENU and the word below it with PREP.

I like the playfulness in the theme, but I wanted something more to tie the theme entries together. Three stars. 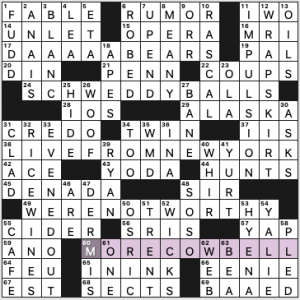 For my money, the funniest thing on SNL in the last couple seasons was Bowen Yang as the iceberg that the Titanic hit, on “Weekend Update.” It doesn’t break down to a single, crisply memorable short line that everyone quotes, but it’s so perfect. Today’s theme is SNL catchphrases:

I think the Schweddy and cowbell ones were one-offs, while Superfans and Wayne’s World were recurring sketches. I had fun with the themers, though 38a feels like an outlier and crowds the grid.

I appreciated WRAP SKIRT but the other fill mostly left me cold. I did a Google news search for IMPULSION and learned that this word is far more common in French and Spanish than it is in English—not sure I’d ever seen that form of the word before. UNLET, I IS, plural SRIS (not sure if that’s legit in Indian English), OSRIC crossing SRIS, LEA, -OLA, FEU… eh. 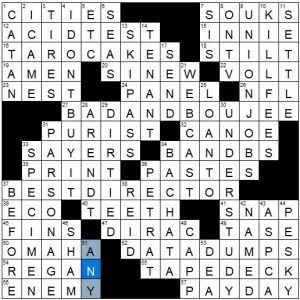 Whoo, this was a fun one. Dense as heck with tidbits of knowledge, I learned a bunch of stuff, and the New Yorker could have run this with a “Constructor X” byline and we all would have known it was Natan. With apologies to the last few puzzles I said this about, my favorite in some time.

Edit: looking at it again, I do see a potential trouble spot at DIRAC (47a- Nobelist Paul who helped develop quantum mechanics), which crosses three proper nouns and a movie (or musical) reference I didn’t know. But those answers collectively touch on a variety of topics, and it’s not like there are *too* many possibilities.

I’ve also got the AVCX today (scroll down!) so getting right into notes, which are going to be lengthy: 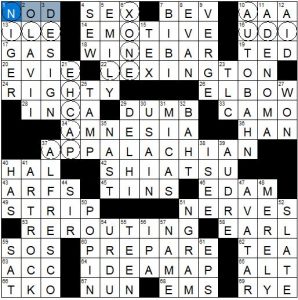 Matt subbing for Ben on a neat grid from Ben (T.) this week. I needed the revealer to make sense of the circles and the “unclued” entries contained in them.

The revealer is at REROUTING (53a- Word when the GPS finds a shorter path, such as the circled letters in this puzzle provide).

Looking back at the themers, there’s the clued entry, and then the circles REROUTING the entry through another that satisfies the clue:

My favorite thing about Schrodinger puzzles are the versatile clues that cover multiple entries, and it’s nice to get more of them. 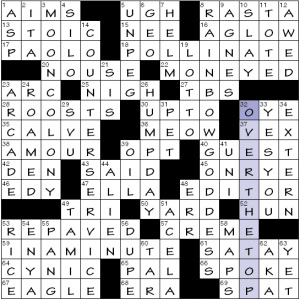 Very solid theme. Consistent, ample. The revealer took a little time for me to parse, I was I was interpreting the revealer as implying some other pair of words, no providing them outright. 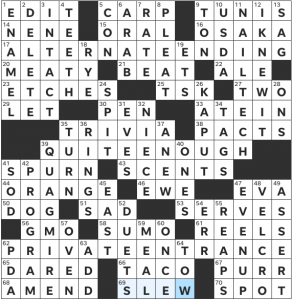 Solid connection to the title, as there is a minor (a TEEN) in each answer. I liked that the TEEN was split up between words and thus changed its sound. Because of that change, it took me a minute after finishing the puzzle to find the theme at all, and at first I wondered if it was just phrases with EE in the middle. I’d hope newer solvers would be able to figure it out, but I’m not sure. I really like ALTERNATE ENDING, and it took me a long time to figure out the first word in QUITE ENOUGH (I kept wanting “just enough”). 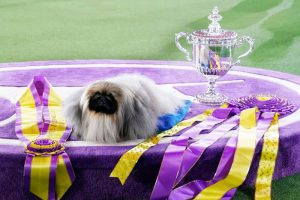 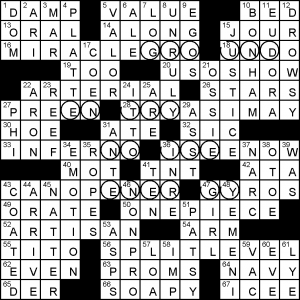 Craig Stowe’s puzzle has something of a stealth theme, with no obvious theme entries. The explanation is, in part, found at SPLITLEVEL. I think I’ve seen the term, but can’t really envision what such a house could be like. In any case, as indicated by the added circles, four words that satisfy “___ LEVEL” are found separated by a black square in four pairs of theme answers.

I appreciate the effort taken in including some interesting answers in the four pairs, as sometimes this theme type can make for staid entries. Here we have MIRACLE(GRO)/(UND)O, PRE(EN)/(TRY)ASIMIGHT, INFER(NO)/(ISE)ENOW, and CANOP(ENER)/(GY)ROS.

The rest of the puzzle played quite easy for me. There weren’t too many tricky clues or proper names to work around. I wasn’t familiar with the particular ARI who is the [“Hereditary” director, Aster], but they are worth noting as both first and last names are vowel-opening. I imagine some may have had to work around [Email program named after writer Welty], EUDORA but you do get two different bites at that apple.