This one’s gonna take some ‘splainin’. Homophones of certain letters replace those letters in phrases which originally defined the sound of the letters. Clues for the new creations are crossword-wacky of course, but the clues also identify other entries in the grid that start with the sounds suggested by the original phrase. Got all that? 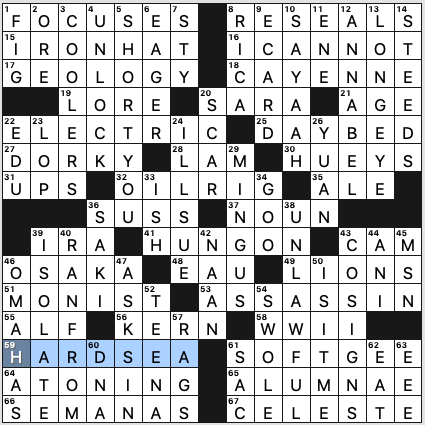 This just felt odd, and maybe overly-convoluted with all the cross-referencing. I think I might have liked it just fine without that cross-referencing, which is how I solved it. It also seems weird that there are other entries in the grid that start with those sounds, but aren’t identified as such, for example UNLOCK, IRON HAT, and COOLERS. Ah, I just noticed that the cross-referenced entries are symmetrically opposite the theme entries, which explains some things and is a nice touch. Maybe you solvers caught on to that quicker than I did.

The fill (even including the theme entries) is loaded with 7s and a few 8s, and as such, doesn’t contain a lot of engaging sparkle. I liked “I’LL SUE!” and “IS IT ME?” and SWOLE best of all but beyond that, it felt workmanlike.

Did not know IRON HAT [Rust-colored outcropping], and I’m not sure that many other solvers would either, unless they have a particular interest in geology. Also, once again we have proper names crossing: KERN and TEENA as well as OSAKA and SAKI. Combined with MONIST—and if you didn’t know “weeks” in Spanish is SEMANAS—that SW corner proved challenging.

This one was different. Different isn’t necessarily bad, but this just didn’t grab me. 3.25 stars. 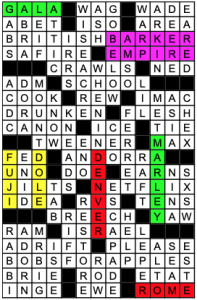 I confess I didn’t grasp how the theme worked here and quickly popped over to Peter’s solution PDF for the explanation. The revealer is 76a. [Participates in an activity at some fall parties … and a hint to this puzzle’s theme], BOBS FOR APPLES. Each short answer to an asterisked clue is a variety of apple (and not symmetrically placed), clued as something else. The other four long entries are oddball phrases made by replacing one of those apple names with the surname of a famous Bob.

Editor: Erik Agard
Theme: Each theme answer starts with a type of bar. The answers are oriented vertically, meaning that the bar type is at the top (“high”) part of the puzzle. 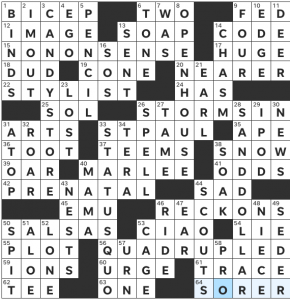 This puzzle certainly sets the bar high for USA Today style crosswords, in my opinion. The four theme answers are all fun, evocative phrases, and the overarching concept connects well to the title. The whole time I was solving this puzzle I was thinking that CANDY BAR related to having a wide variety of different types of candy to choose from (like they have at some weddings, or like Dylan’s Candy Bar) as opposed to, you know, a singular candy bar. I also personally believe that every person between the ages of 20-25 learned the phrase STATUS QUO from High School Musical (iykyk).

Oftentimes when a puzzle has full diagonal lines across its middle, said middle can become choppy and feel full of short answers. The opposite happened here – the middle feels wide open. The northeast and southwest corners take that hit, though, and feel a bit disconnected from the rest of the puzzle. The fill is suuuuuuper clean today though – on a pass through, TERA is the only minor problem I have, and that’s saying something. The long across answers of QUADRUPLED and NO NONSENSE are also lovely. 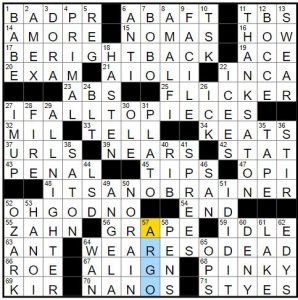 Matt filling in for Ben again today, this time with the Times puzzle.

I’m somewhat surprised this is Alan’s fourth puzzle for the Times; I feel as if I’ve seen his name a bunch more than that. I always open a Thursday puzzle with high hopes for tricky themes. Today’s not that, but it is seasonally appropriate.

Common phrases are clued as if they were relevant to zombies:

I have no stomach for the horror genre and thus little familiarity with what is standard for zombies, so my apologies if some of those questions are harsh. The theme as a whole didn’t excite me — IT’S A NO BRAINER is a winner and the clue made me chuckle, but I wonder if the pairing has a better home in a themeless given the varying degrees of forced the others feel.

Big highlight of the fill for me: OH GOD NO (52a- “Abso-lutely not!”). You know I’m a sucker for conversational entries where the clue nails the tone. Rest in the notes:

Theme: Each themed answer includes a play on a piece of sports equipment with the second word in the phrase reversed 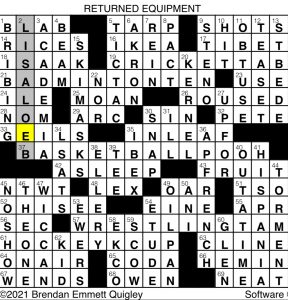 Do you ever come across a theme and wonder how the universe made words this way? That’s how I felt with this. Like, come on. HOCKEY KCUP? BASKETBALL POOH? Absolutely unreal. I thought that this was a super fun theme and am glad that someone pointed this out about these particular pieces of sports equipment. I may steal this for jokes going forward. BEQ, we’ll talk about royalties!

I liked the grid here with some longer 8-letter answers like HISPANIA and LISA LOEB. 40d’s [License plate of Doc Brown’s DeLorean] OUTATIME is a classic. We love seeing those 80s movies references. I was absolutely screwed when it came the bottom middle section, having little familiarity with musical conventions (ETUDE and CODA), country music (Jake OWEN), or kitchen brands (EKCO). SCOW (59a [“Garbage transporter”]) is also a new addition to my vocabulary (and I appreciated its pairing with 49d [“Garbage collector”] OIL PAN.

That’s all from me for today! See y’all tomorrow. 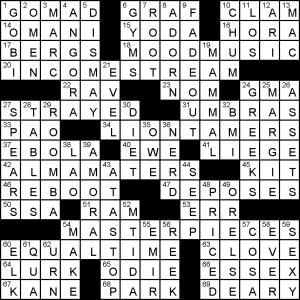 Jerry Edelstein’s puzzle is revealed at MASTERPIECES. As indicated by the added circles, the three other long acrosses have anagrams of MASTER. I’m not too sure how PIECES is interpreted as an anagram indicator. The one pair of answers – ALMAMATERS & LIONTAMERS seem destined for each other, as I’m not sure there are many more choices out there. The first answer, INCOMESTREAM is paired with the revealer.

THEME: WOOD “drifts” from one side of common phrases to the other. 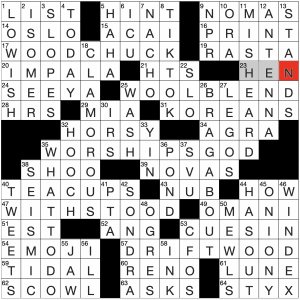 This is clever with the revealer so solid. Really like the way the WOOD travels ever so slowly to the other side. Didn’t really appreciate what was going on until the revealer. I wonder if this theme was originally pitched to include circles. I’m glad it didn’t have them in this case. Made it more fun and less of a gimme to figure out.

I didn’t particularly find the themers themselves all that “flashy,” nor much of the fill surrounding it. That was a bit of a bummer. At 74 words, it *almost* has a themeless look to it, so I was hoping for some fun stuff in those big corners. HTS is an abbr. I don’t see that often…

Nice clue for MISHEARD [Interpreted “All of you” as “I love you,” perhaps]. Could be a dangerous mistake to make, depending on the context.

Looking forward to more from Adam!