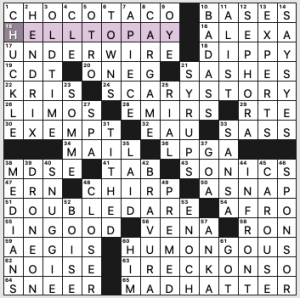 Ach, I’d’ve finished under 4 minutes if not for a careless typo! I do feel that Friday NYTs have been a couple notches easier this past year or so. I think I used to average more like 4:30 on Fridays, and these days there are a lot of sub-4 finishes. (Which means sub-2 finishes for the extreme speed demons.)

Lots of fun stuff in this grid. Of note: CHOCO TACO, HELL TO PAY, UNDERWIRE (and no, this [Boob tube?] clue wouldn’t quite fly from a male constructor), SCARY STORY, DOUBLE DARE, HUMONGOUS, “I RECKON SO,” the MAD HATTER, CHUCKLE, Jimi HENDRIX, DRONE ON, SNUGGIE, BADASS, SEPHORA, SANSA Stark, and CAROUSE. There’s definitely a “puzzles by women” vibe here, with SASHES clued via bachelorette parties, and SEPHORA clued as an [Ulta competitor] and if you don’t know Ulta or Sephora sell makeup and such, that’s on you—if I had to learn Warren Spahn and Mel Ott, this won’t kill you.

There are some blah bits—ERN ENOCH ANKA CLE GOA ONEG MDSE—but overall there was so much I enjoyed in this puzzle, I forgive them.

Theme: Each theme answer starts with a word that also happens to be a way to kill vampires. 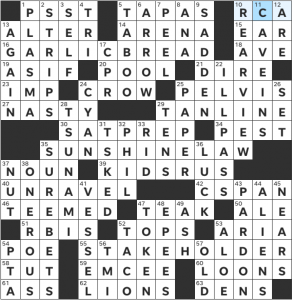 Y’all, have I said it’s spooky season, or is it spooky season???? With Halloween right around the corner, we’ve got this fun themed puzzle that is also an encoded manual on how to kill vampires. Ya know, in case you’ve never needed to do it before. Anyway, STAKEHOLDER gave it away for me, though it wasn’t until after the puzzle that I realizing exactly what we were slaying. GARLIC BREAD was an excellently tantalizing clue, and I thought that it paired nicely with the other two 11-letter themers.

Grid-wise, I thought we had some solid fill. I love the little corner cap in the upper left and bottom right, though that’s more for aesthetic reasons that anything else. The six-letter double hitters in the corners were also great for moving through the downs quickly. There were a few words that I didn’t feel like I see very often, like PARDON (43d [“Forgive”]), 41d [“Steamship, for example”] VESSEL, and 10d [Mirror useful for glaring at a backseat driver”] REARVIEW. I definitely struggled with CAVE INS for a bit but got there once I realized that 18a [“McKinnery or Greenville, in Dallas”] was AVE.

Overall, this puzzle slayed me, without using garlic, a stake, or sunshine (though the sun isn’t even up for me yet, so we’ll see!). Have a great Halloweekend, y’all! 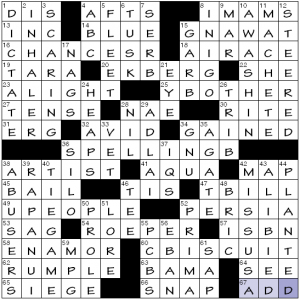 This theme might be exciting to a novice solver, but jaded folks like us probably expect a little more. Something tying them all together thematically, such as a cohesive subject for all five entries; or if the implanted letters (R-Y-B-U-C) spelled something or sounded out something (are why bee you sea). But, nada.

So here’s Roebuck ‘Pops’ Staples taking a verse on a warhorse. I considered sharing a song that features him more prominently, but the staging, Scorsese’s direction, and whomever of the film’s three cinematographers make this a nice choice.

The ballast fill is solid and lively.

This one had me befuddled until I uncovered my fourth theme entry. Then I fell in love with it.

Each theme clue has two parts, a Before and After. The Before part clues the entire phrase before the top half was turned upside down. The After part clues the separate words with a mentally-added UP and DOWN. This is revealed by 36d UP AND DOWN [Fluctuating, or two words needed to understand the starred clues’ “After” parts]. 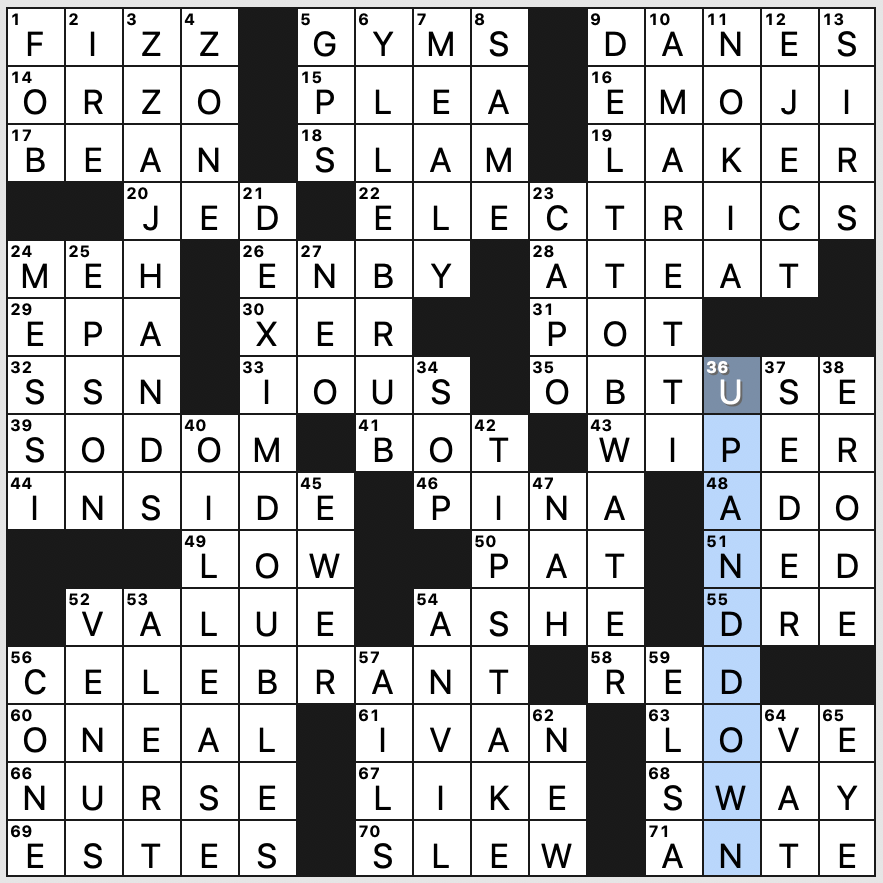 Just a lovely, elegant theme—once I had the aha moment of course. It was belly up that did it for me though I had already uncovered most of the other entries.

I liked it so much I was a little disappointed when I found the revealer; I wanted another theme entry. I suppose it was necessary to include the revealer; no doubt some solvers made it to that point still in the dark.

Since I wanted another theme entry, I went and found one on my own: make tracks (make up, tracks down). Also: back talk, hook shot, clean sweep. There must be more. Can you come up with one?

The grid’s 3-letter-word count is pretty high (22), but honestly I didn’t notice during the solve. Our constructors did a good job of keeping things smooth. Top fill includes AMARETTI and CELEBRANT with ELECTRICS and OIL LEASE rounding things out. I don’t think I’ve seen ENBY [Nonbinary person, for short] in any of the major publications yet, but I like it, and I expect we’ll see it again before too long. 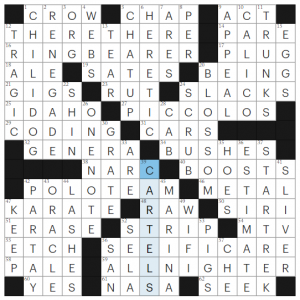 Happy Halloweekend!! This delightful puzzle was a delightful start to my weekend. Constructing for the USA Today has made me pretty strict about fill, so I always scour grids for words that might be obscure or oddly phrased. I could not find a single one in this grid. Really impressively clean work. Favorite entries below, and there were a lot of them: