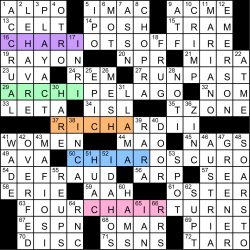 Good day, everyone! Before anything else, I have to say one thing: VOTE!!

Here is hoping that you are all doing well on this Election Day. Many people are running for seats in government, though today’s grid does some funny things with seats! The first five letters of the answers to the starred clues are anagrams of the word “chair,” with the fifth and final theme entry, FOUR CHAIR TURNS, acting as the revealer (63A: [Top honors on NBC’s “The Voice”…and an alternate title suggested by the starts of the starred answers]).

Absolutely got off to the worst start, putting in “chow” for ALPO and getting stuck from the very beginning (1A: [Rover’s bowlful]). Chow, Alpo, Iams, oh my! In that area, and in the southeast, are those stacks of seven-letter entries doing down, and 12 seven-letter entries overall definitely made for some fun fill. Of that dodecad of entries, probably my favorite was the clue/entry combination of DEFRAUD (54A: [Take for a ride?]). Definitely felt a Eurocentric vibe to the grid when solving as well, from Richard II to chiaroscuro to PIET (69A: [Dutch artist Mondrian]) to AUSTRIA (46D: [Mozart’s birthplace]) to even CELT, despite its cluing referencing the struggling NBA team (13A:[Boston NBAer, briefly]). To boot, anyone here get down to the FRUG during their ’60s or ’70s heyday (18D: [“Groovy” 1960s dance])? I mean, if I was living (and dancing) during that time, I would have been more of a twist or funky chicken person. But hey, I can dig this, too!

“Sports will make you smarter” moment of the day: EMERSON (12D: [“Nature” essayist]) – The 2022 tennis season will start with Roger Federer, Rafael Nadal and Novak Djokovic tied atop the leaderboard for most men’s singles Grand Slam titles with (21), but, not too long, ago, the man perched atop that list used to be Australian Roy Emerson, who won 12 singles Grand Slam titles in his Hall-of-Fame career. Emerson won his first GS singles title at the 1961 Australian Open, and he also won the US Open that same year. Emerson won the Australian Open six times, and won each of the other three majors twice, winning his final major in singles at Roland Garros (French Open) in 1967. His record of 12 singles Grand Slams stood for over 33 years, until Pete Sampras won his 13th GS title at Wimbledon in 2000. Oh, and to go along with his staggering 16 doubles titles in Grand Slams, Emerson, to this day, has more Grand Slam titles than any male player at 28. A living legend, for sure! 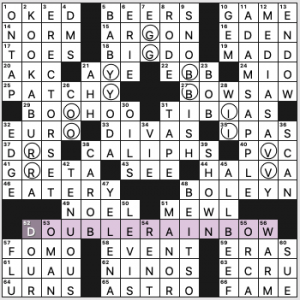 Roy G. Biv gets his moment in the sun … while it’s still raining. A DOUBLE RAINBOW (52a. [Rare sighting after a storm … or a hint to this puzzle’s circled letters]) is made by arching the stacked letters RR OO YY GG BB II VV, representing the initials of the colors of the rainbow. This rainbow is rather pointier than the ones in the sky, mind you.

The rest of the puzzle basically plays like a themeless—you can use the double-letter pattern to fill in the circled squares, but that’s it. We do get some colorful longer fill: KOOKABURRA, ERECTOR SET, adorable BABY YODA (aka Grogu), and MEDIA-SAVVY.

Theme: Familiar phrases that start with a word that can also be a food are clued with respect to a political candidate visiting an apt restaurant (it being Election Day today). 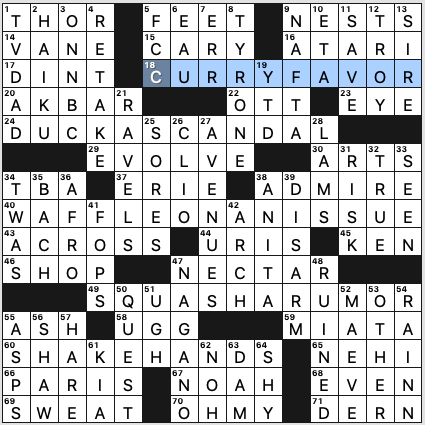 Hit and miss with the entries for me, but overall I like the consistency and the imaginative scenarios. Very timely as well.

Similar to yesterday’s grid, I don’t see anything longer than seven letters in the fill, and only AVENUES at that length. I do like NAGANO and TYRONE Power. Not so keen on ON NBC. And LAMS. Does anyone ever use the word lam except in “on the lam”?

No clues that I noted for comment, so I will leave things there. I like the cute theme though the strength of entries varied. 3.5 stars.

An excellent puzzle today with a fun theme and great clues! 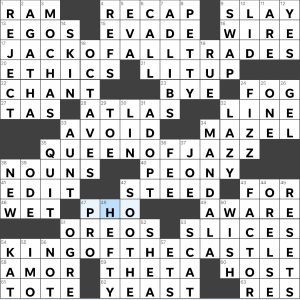 Theme: Each themer is a phrase starting (in “front”) with the name of one of the “face” cards from a card deck.

Such a great theme today—the title is just enough of a hint, and paired with the first themer clue, I got the pattern right away. My favorite cluing today is for JACKOFALLTRADES, for which “generalist” came to mind and lead right to the themer with “…master of none” to follow. Sadly, Ella’s nickname took me longer than it should have, as I had to double back later to complete it. The last part of KINGOFTHECASTLE stumped me until I had the “c” crossing, as I know the game as “hill” or “mound” instead. Still a very fun theme and it is in order of jack, queen, king. Nicely done!

Stumpers: RECAP (good misdirect for me, I was thinking “total” or “added”), MAZEL (needed crossings, just didn’t click sooner for me), and PEONY (I could only think of dandelions)

Love the clue for WISH, especially with featuring 11:11, which is the most delightful of the wish times (e.g. time with the same number repeated). Also, I filled in STEED and immediately heard Donkey’s voice from Shrek “I hope you heard that. She called me a ‘noble steed’. She thinks I’m a steed!” Lastly, I enjoyed OREOS which was a new clue (at least for me) but since it was a cookie clue, my instinct of the entry turned out correct. Fun fact, having started following many in the crossword community, I now have an overabundance of Oreos ads in my Twitter feed, after never seeing any there before. Ha!

I hope there are more collabs between Ann and Brooke in the future! 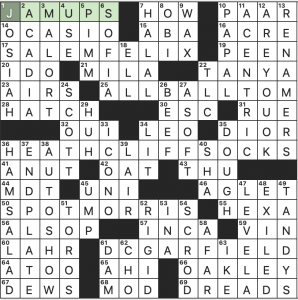 My wife is a cat-lover, so she enjoyed this theme! I, too, prefer cats to dogs, but I also prefer no pets overall! Did you know all of the cats paired together in the theme answers?

I believe Salem is from Sabrina, the Teenage Witch. Felix, Tom, Heathcliff and Garfield are all from the comics or cartoons. All Ball is the “pet” of Koko the Gorilla! Morris is from the 9 Lives commercials. D.C is from That Darn Cat! Spot the Cat is a children’s book, and finally Socks roamed the White House when the Clintons were there. Did I miss any? Lots of opportunity for punny clues in this theme. 4.4 stars from me!

That is all! Another Jonesin’ next week! Enjoy some Marie Osmond! 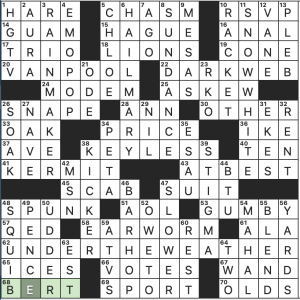 Another new database name! I think the pandemic influx of new constructors is still rolling! Nice theme idea, too:

So the latter part of the down-facing theme answers are literally under a word that is a form of weather. Nice! Although this is reminding me that snow is on the way! I am gonna have to move somewhere warmer ASAP! If this is a debut, congratulations! 4.6 stars from me!

Best title for a crossword ever. I don’t even care what the theme is. 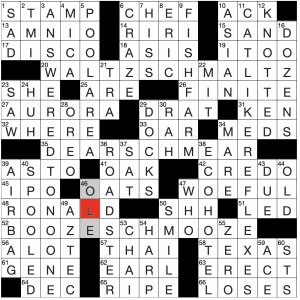 Love that this puzzle didn’t try to cram one (or even two) more themers in, giving it plenty of room to breathe with those very enjoyable, tight phrases.

Also, very peculiar to see non-theme-related grid-spanners. Here they’re ANSWERED TO NO ONE, and CATLIKE REFLEXES. Both excellent, and neither of which draws attention away from the theme at all. That’s remarkable. They are literally pillars of excellence.

Really enjoyed this one.