Theme: Today’s theme entries are comprised of familiar phrases whose final words start DE— and roughly sound like DUH. This DUH is replaced with THE with the remainder of the word forming a separate word, with spelling changes as needed. This is revealed with NO DUH (63a, [“Obviously!” (and an apt title for this puzzle)]). 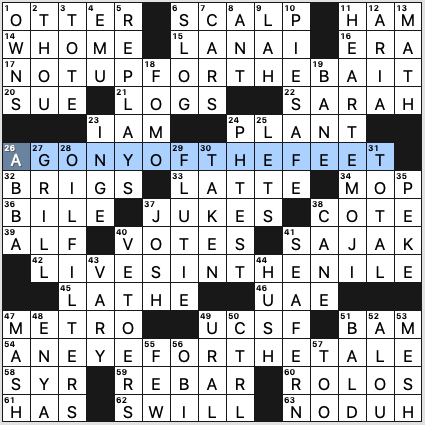 Now, I usually pronounce “detail” as “dee-tail,” and I think most people are similar. But I was sold on the theme by the earlier entries, so I’m willing to look past it. I enjoyed this daddish puns. If your pronunciation leans toward the dee sound for most of these, then you probably enjoyed this less than I.

Hey, it’s nice to have some long fill again! HEART EMOJI is a great entry with a fun clue [Result of a love tap?], although the question mark made me think it might be a theme answer at first. OIL FILTERS is nice as well. PIE SAFE [Kitchen cabinet] is new(ish)-to-me, so I needed every crossing. Same with SEA FERN [Branching coral]. 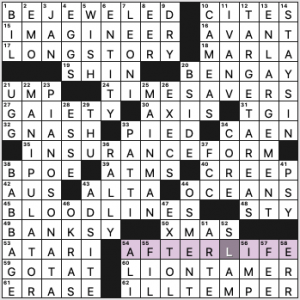 There’s a theme in this rather themeless-looking puzzle (72 words), chock full of long entries, and here’s the revealer: 54a. [The great beyond … or where each word in 17-, 24-, 35- and 45-Across might be found?], AFTERLIFE. Those other four themers split into two words that can follow life:

Unexpected to have 9-letter themers be stacked with a couple non-theme 9s, and to have nonthematic stacked 11s in two corners.

Theme: Each theme answer begins with “LA”  and ends with “NY”, a la Los Angeles and New York. 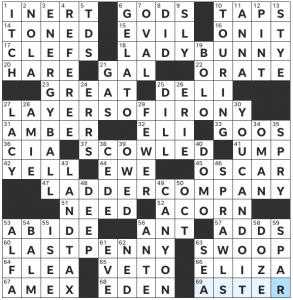 I figured out the theme mid-solve, which doesn’t always happen to me on the USA Today if I’m moving quickly. Knowing the LA – NY trick was very helpful, because none of these answers came to me easily at all. I love LADY BUNNY as an answer but I had never heard of her, and to me a LADDER COMPANY is just a company that sells ladders. LAYERS OF IRONY and LAST PENNY are both solid phrases, but I needed a lot of letters to see them – but luckily I got a bunch from the theme! I liked that the LA was on the left side of each answer and the NY was on the right, like a visual representation of where they are in the country. And I was glad to see my own part of the west coast represented by SEA, even if it wasn’t clued that way.

As with all of Zhouqin’s puzzles, the gridwork is extremely solid here. My thoughts on a few entries in particular: 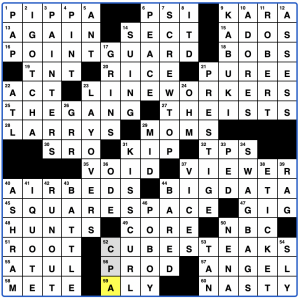 That’s everything from one dimension (point) through to three dimensions (passing through, in order, line, square, cube) in the theme answers. The fourth dimension, of course, is the time spent solving this puzzle.  It’s definitely a 2 of 5 on the difficulty scale, but it was a lot of fun.

Other nice fill: THE GANG (as in the Scooby Doo gang, “Mystery Machine occupants, familiarly”), BIG DATA, PAINTERS (“Coat designers?”), and KISS CURL (“Hair feature for Josephine Baker and Superman, traditionally held in place with spit rather than a smooch”). 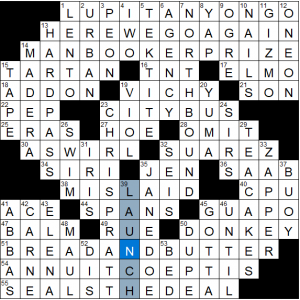 Easier Wednesday for me than the last two weeks from the New Yorker – perhaps your experience was similar.

The stars of the show from Natan today are the stacks at the top and bottom of the grid. I love the S-shape that you get with this type of stack, and especially when the stacks pay off.

We’ve got LUPITA NYONGO (clued to the movie “Us”), fun conversational entry HERE WE GO AGAIN, and MAN BOOKER PRIZE up top, and BREAD AND BUTTER, ANNUIT COEPTIS (took me a minute of picturing the dollar, and a few crossings, but a satisfying click), and SEALS THE DEAL below. All assets to a themeless grid for my money.

Right into notes, because there’s a few: 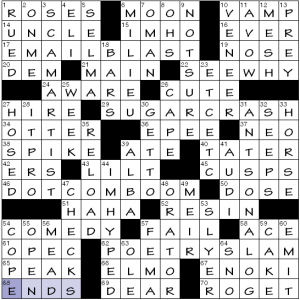 Each of the theme answers ENDS (68a) with an ‘impactful’ word.

So that works well. Approachable theme, and not particularly traumatic despite the subject. 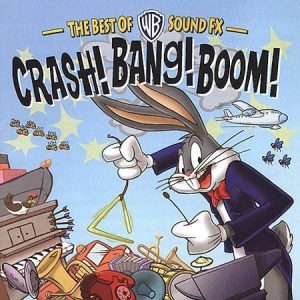 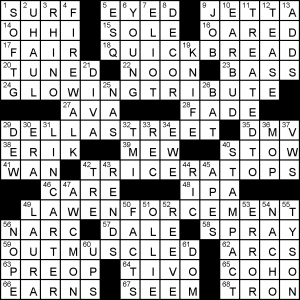 Today’s puzzle by August Miller features an interesting set: shortened forms of muscles; except with triceps not shortened as an odd one out. The rest are: quad(ruceps),glute(us),delt(oid) and lat(issimus). The revealing OUTMUSCLED was apt if not quite as cute as I was expecting. As it implies, the outer parts of five other entries spell out colloquial muscle names. I feel like one fewer theme entries would have made the puzzle better on the whole.