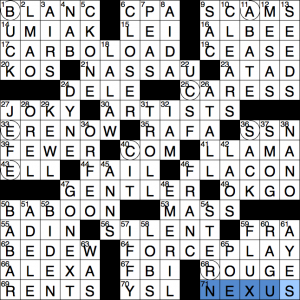 hello and welcome to episode #700 of matt gaffney’s weekly crossword contest, “FACEBOOK Is Now META”, referring to last week’s announcement that the company facebook (but not the app) is changing its name to meta. for this week 5 puzzle, the instructions are: This week’s contest answer, which is eight letters long, is something that’s often useful in solving metas. okay. what are the theme answers?

… i don’t know. there are two nine-letter across entries, {Eat pasta before a marathon, say} CARBOLOAD and {Shortstop’s throw to second base, usually} FORCEPLAY. i suspect that both of these are at least somewhat involved in the theme, because they both contain many letters that are in FACEBOOK. but i don’t know what to do with that, really. and there are no other long answers.

how would we use the title? well, FACEBOOK is 8 letters and META is 4 letters, so maybe we are dividing it into FA|CE|BO|OK and then turning FA into M, CE into E, BO into T, and OK into A.

oh, okay, that’s just … it. that’s definitely it. searching for instances of those bigrams, we have eight of them (including in the two nine-letter entries i just found), all reading across. and in each case, replacing that bigram by the corresponding letter of META produces another valid word:

the next step is to note that the eight new words can all satisfy clues for different entries in the grid (been a while since we’ve seen this trick, but it’s a very handy one to have when you need it):

okay, well, we’ve done it, except, uh… what’s the answer? i have eight theme answers and eight corresponding other entries in the grid. taking the initial letters of the eight other entries (which is normally how this works) gives SAEBCERC. reading them off in grid order instead gives BACESCER. i don’t think we’re supposed to use the original theme entries, but the first letters of those are either CCJRFOBF or CEJRMABF depending on whether we apply FACEBOOK -> META first. none of these eight-letter strings looks like it could be the answer even if we anagram it. i’m not saying we should have to anagram it, but i am saying that it’s not likely that i’ve got the right eight letters and just haven’t thought of the correct ordering mechanism. it actually seems more likely to me that the ordering mechanism is right (i.e. reading off in order of the original 8 themers), but maybe i’m not taking the right letters.

is there anything else going on? the pairs of related grid entries don’t intersect each other (the first eight were all acrosses, but the second set of eight were five acrosses and three downs). maybe instead of taking first letters, we are supposed to take a corresponding letter; i.e. if the replacement letter in META is the third letter in the transformed word, we take the third letter of the answer to the matching clue? that gives … KALCCEUE. that’s interesting enough in the sense that it has enough vowels to be a disarrangement of the right answer, like CAKE CLUE or something. but it’s obviously not the answer.

oof, it’s frustrating to have gotten so far and be unable to finish the job. what am i missing?