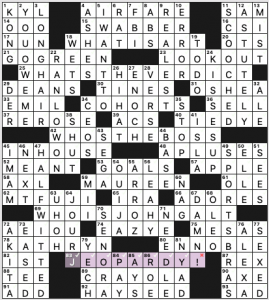 Cute theme in this 17×19 puzzle: The name of the game is JEOPARDY!, [Game show on which this puzzle’s theme clues might appear]. The theme entries are phrased in the form of a question that would pass muster as entries in a themeless, but clued as if they’re Jeopardy! responses in a different context:

I enjoyed the puzzle overall. Pretty solid fill; I like SCOOCHED the most.

Nine more things, including a number of clever clues:

The title describes the theme perfectly (or from a mile away if you’re a pessimist). The letters BE are added to familiar phrases. 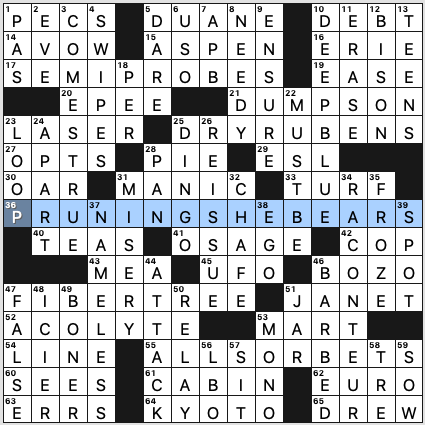 Fairly standard stuff. Nothing got me chuckling, but these are fine. By Thursday, I’m hoping for a more adventurous theme than adding letters, though.

Sparkly fill: DEEP BLUE, RACONTEUR, NAMELESS, COMES TRUE, ACOLYTE, DUMPS ON. Here’s BOZO which is better than BOBO which we saw sometime last week somewhere. I also noted “MUST BE” at 22d, since it seems theme-adjacent. 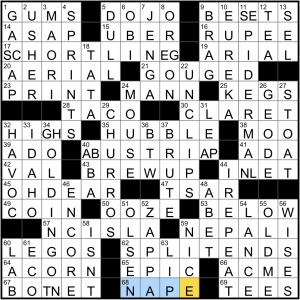 David Steinberg has today’s NYT, and it’s got some nice structural stuff happening in the theme clues:

What’s nice here is that the crossings on these squares utilize both letters:

I leave it there, but I did like the combo of ARIAL and AERIAL in this grid.

Excellent title to a fun concept for a puzzle!

THEME: Clues are homophones for common phrases with the word “Roll,” and instead ask for movie roles. 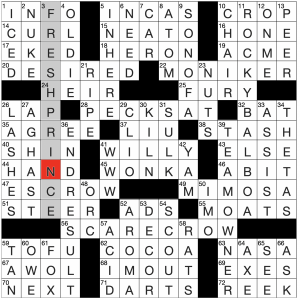 This works best if you don’t overthink the phrasing. Like “Role in the hay” doesn’t really make me think of SCARECROW. The scarecrow is comprised of hay, not really “in it.” I suppose… WILBUR, BABE, or any other famous movie pigs would be more “in” the hay. But that kind of semantic nitpicking doesn’t bother me when the overall theme is well-conceived, as this one is. The cleverness is in the cluing, and it’s a tight theme overall.

Is it bad that I had no clue Michael Jordan was the TEAM OWNER of the Charlotte Hornets? That was the fun fact for me today, but I have a feeling that. it’s fairly common knowledge for everyone else.

Everything else about the fill fairly standard! I feel like I’ve been seeing a lot of Right/Left symmetry in Universal lately :) That’s fun.

Theme: Each theme answer begins with a word that can follow the word “holy” in a common phrase. 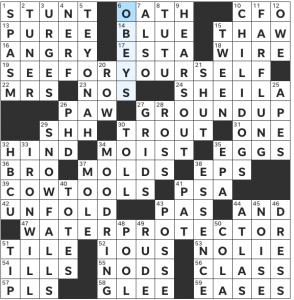 Despite this being a classic USA Today theme type, it took me forever to understand, and I’m not sure exactly why. I think I was looking for a theme type that used the entire phrase, given that “wholly” was in the title? But I guess the whole puzzle adheres to the theme, so…. I have never heard the phrase COW TOOLS in my life, which the internet tells me is a reference to a Far Side comic. One metric I have for entries in a puzzle I don’t know is “If I had heard of this thing, would I be hyped to see it in a puzzle?” COW TOOLS falls into that category for me, so I am not upset with it as an answer, especially as it was crossed fairly. I liked all the other theme answers a lot, although I didn’t love the clue for GROUND UP since coffee beans aren’t inherently ground? But that’s a very minor complaint on a good theme set.

Quick notes on the rest of the puzzle: 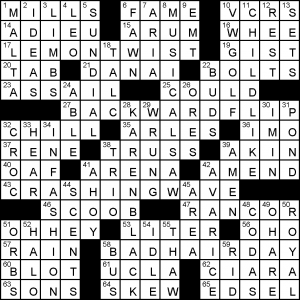 Today’s theme by Nancy Stark & Will Nediger is a little subtle, but actually a lot more clever than at first it appears. BADHAIRDAY is already an excellent revealing answer. The three answers, LEMONTWIST, BACKWARDFLIP and CRASHINGWAVE, not only contain a hairstyle, but also assign a negative quantity to it! Very elegant! 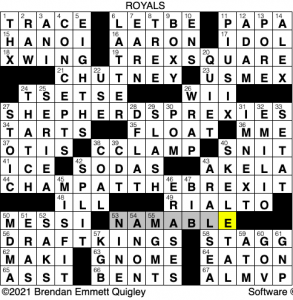 “Rex” is a fun word, and so seeing T-REX SQUARE as the answer for “Dinosaur plaza?” was an immediate winner for me. I love dinosaurs. However, it also set a nice tone as I figured out the rest of the themers. I definitely had to wait for PREXIES to be filled in via the crosses to have enough to work with to get SHEPHERD’S. I was not familiar with this as an abbreviated plural for “president.” Overall, I thought that this was a great theme and especially appreciated that REX fit so smoothly into each answer.

Grid-wise, I wanted the corners to be a little more open to the rest of the puzzle. When I solved the bottom right, I wanted it to help me with the areas above and around it, but I didn’t feel like I got a lot to work with in finishing the corners. I struggled with some of the center clues, and it was more difficult to get the bottom section to help me out of that bind. However, that said, I thought that, aside from C-CLAMP (38a [“Shop holder”]), the middle section clues were all pretty solid. Overall, a minor note, but just to give y’all an insight into my solving process.