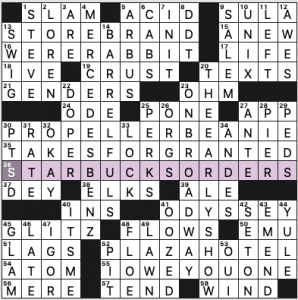 Taking a break from my Friday-night streaming obligations (new GBBO and The Morning Show!) for the puzzle. This 72-worder is anchored by the triple-stacked 15s in the middle, with assorted 10s and 12s around and about.

Fave fill: STORE BRAND (shoutout to “Wal-Dryl”!), the Aardman Animation WERE-RABBIT, a timeless old PROPELLER BEANIE, TAKES FOR GRANTED, STARBUCKS ORDERS (would be better in the singular, though), an ODYSSEY, the PLAZA HOTEL, MERCEDES-BENZ.

Four stars from me. Back to the Bake Off! 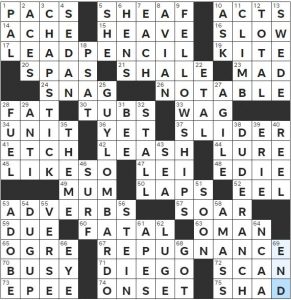 It’s Lynn Lempel, so you know we’re in for a goody.

I didn’t catch the title before my solve, and the theme eluded me until I went back later. Themers are the long downs:

CHAP, GUY, FELLOW, and DUDE, all running down to fit the title “The Fall of Man”. Elegant.

Feeling uninspired (and jet lagged), so no notes today. Have a great weekend! 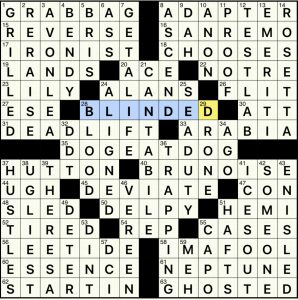 This was a trademark Stella Stumper today! It is a rare occasion for me that the LAT Saturday puzzle takes longer than the actual Newsday Saturday Stumper to solve, but this is one of those times! Normally this type of grid pattern doesn’t give me too many fits, because there are no super-long entries in the construction. But I am sure I learned a new term or three whilst solving this one! Solved on my iPad, so I am sure that added to the slower time a little, but rest assured that most of that time was spent just sitting there and not typing anything. Still not as hard as the puzzles on her site, which just recently got to puzzle #50, but this one was a doozy. That I absolutely enjoyed! A solid 5 stars out of 5 from me!

Whew! Now off to watch a little college football today. Hopefully my Wolverines can bounce back after last Saturday’s agonizing loss. Have a great day! 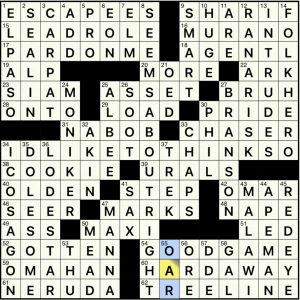 Usually the Lester Ruff Stan Newman puzzles (his pseudonym meaning “less rough” than normal) are just that: easier. Not so much for me today. Got through the NW section relatively quickly, and then the solve got a little slower. Yes, that is one error mark down where the cursor is in the grid image. I’ll blame that on a mishit on the iPad! Fun puzzle to solve, even though thorny in a few spots. 4.6 stars from me.

Some stuff I liked:

Looks like a debut for Katherine Baicker! Congrats! Hope you’re kickin’ your feet up and enjoying the day.

THEME: Situations where one would lie down. 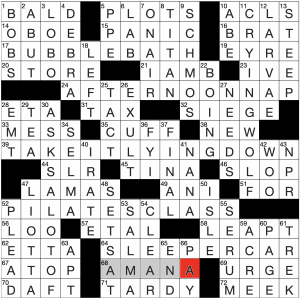 A relaxing puzzle, which is completely apt. Very enjoyable. Simple theme and mostly consistent. While they all definitely work with the revealer, I did feel AFTERNOON NAP was a bit of an outlier, only because it’s not really a “place” per se, as the others are. No big deal though. Still works with the revealer, as one would definitely take an AFTERNOON NAP lying down. I try to take one for about 10 minutes every day. Very difficult to do with two Great Danes who are very happy that you just came home. Ouch.

Favorite mistake: 47D [“Goodfellas” co-star Ray]. I entered ROMANO. That would be a hilarious version of that movie.

New for me: Rebecca LOBO.

I believe it’s my first time seeing PPE in a grid. Was that a common-knowledge term prior to the pandemic as it is now?

Thanks, Katherine! Looking forward to more from you! 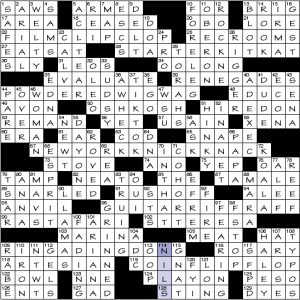 In which we see a before-and-after theme where the second parts are ablaut reduplicatives. If you don’t know what I’m talking about, it’s certainly easy enough to grasp intuitively.

No need to dillydally—this was a fun theme and I found it to be well-done.