When I see a titled puzzle, I always like to try and guess at what the theme will be. Well, no amount of guessing would have done me well today – it’s a rare New York Times Sunday themeless, a wonderful opportunity for constructors like Sid to stretch his legs and fill a grid with lots of fun and vibrant fill! Let’s take a look at some of the longest entries (and apologies for my handwriting in the grid!): 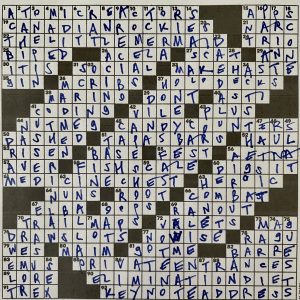 I wonder if any of these were a seed entry. They’re all solid terms or phrases, but none of them immediately jump out as a modern or inclusive bit of fill that Sid had to get in a grid. Even still, it was an enjoyable solve without much frustration as I went through solving the grid.

Some other favorite entries/clues:
24A: TRIO [Rap’s Run-D.M.C., e.g.] – This didn’t have to be clued with respect to a rap group, but doing so brings a point of reference not as often seen in the NYT puzzle, one which might bring in people who say, “Oh, I know that!”
36A: MCRIBS [Seasonal fast-food sandwiches that aren’t halal] – I love the halal angle to this clue! It wasn’t needed for the clue, but some solvers seeing that bit might see themselves reflected in the puzzle and feel like their experiences matter to the NYT. This is also why I appreciated the clue at 12D for OKRA [Vegetable in bhindi masala].
58A: FISH SCALE [Tough bass part] – Cute clue!
72A: VALETS [Employees who work a lot] – They work a parking lot. Nice misdirect!
76A: DRAWS LOTS [Grasps at straws?] – This one made me smile.

Also, if you’re going to go into the comments and tell me to stop being woke or whatever, 39A: DON’T [stern glare]. Instead, tell me in the comments section below something you enjoyed about Sid’s puzzle. Have a great day and don’t forget to set those clocks back!

Theme: Each theme answer includes the letters to spell out “REALM” spanned across two words, referencing the territory of a kingdom. 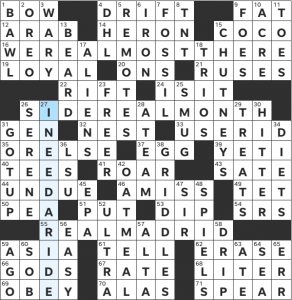 This was a fun hidden word theme, especially since REALM really is spread out differently in each themed answer. This type of theme provides a nice balance with those in which solvers are expected to pair up a word in the title with an answer (ex. Wendy L. Brandes’s puzzle that I reviewed the other day). I like both types of themes, but it’s fun to notice the pattern in which a pattern appears repeatedly in themed answers.

Grid-wise, I enjoyed this puzzle. It felt pretty open, which, if you’ve read some of my other posts from this week, has been especially on my mind. 27d [“Plea from someone who’s stranded”] I NEED A RIDE was a nice long answer that moved fluidly through the middle and lower sections of the puzzle and providing the R for REAL MADRID.

Some other notes from me today:

Have a good week!

Shoulda come with a trigger warning… I despise the hour time change, and I told myself I wasn’t going to let it bother me this year! Fail. 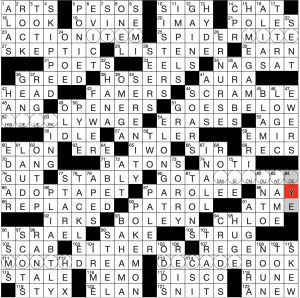 A very clever puzzle, somewhat more difficult and zany than I anticipated it would be after last week’s tour de force. It looks like my timer never started, but I’d bet I was in the 18-20 minute range, which is higher than usual for me for a WaPo solve. To be honest, I didn’t fully grok the theme until I was done. I saw two of the three hints, and was trying to figure out how they related to the entire puzzle rather than just the section it was very clearly referring the solver to.

I completely missed the Schröedinger’s puzzle piece until well after post-solve. That’s a testament to the cluing there because those puzzle types have a tendency to feel contrived and forced. I definitely remembering slowing down in those areas and thinking the clues were tougher than I had expected them to be (like RAGU for [Simmering product]), but nothing that sent the Scowl-o-Meter off the charts.

I feel like I made every misstep possible in this one: ERIE for OTOE, AS IF for ALAS (dumb mistake considering “if” is in the clue: [“If only!”]), TAXI for SEMI… that’s skimming the top. It was like that the whole puzzle for me. My favorite ridiculously wrong entry being EWE for ERE [Palindrome in an ode]. I swear I got myself to accept that someone somewhere at some time wrote an ode to a sheep.

This was one of those puzzles that I enjoyed the post-solve AHAs, however. My first-thing-after-I-woke-up solve might not have served the puzzle itself well.

Enjoy Sunday! And that extra hour of sleep that comes with it as we voluntarily plunge ourselves into darkness one hour earlier than necessary for the foreseeable future!

And no one quite nails it like John Oliver when it comes to time change (and yes, I’m aware that we are now going back to standard time, but it doesn’t matter… changing the time is absurd):

THEME: AH is added to common phrases and wackiness in a geographical sense occurs. 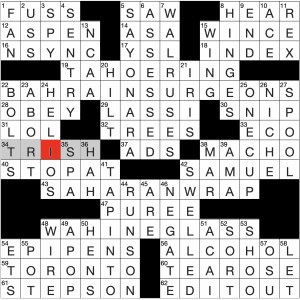 Love the consistency in the AH additions in that they brought us all over the world. And it wasn’t always apparently obvious where the AH would appear, but it still lent itself to synergy if the solver needed a nudge.

Of course the “Add-A-Few-Letters-In” theme has been done many times (and will continue to be done), but this whole idea felt fresh in the way it was presented. Bravo!

Theme: Familiar phrases are re-imagined as pertaining to stage productions. 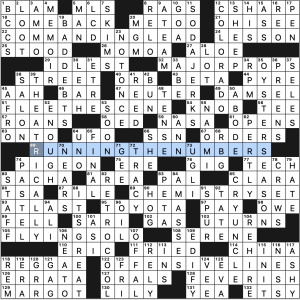 A nice, fun set. Evocative entries and sensible clues once you catch the drift.

THEATRICALLY is a apt bit of fill given the theme. Elsewhere we get lovely entries OYSTER SEASON, BAD DEBTS, CRY UNCLE, COLORADO, and SODA JERKS. plus COMEBACK and FEVERISH. I’m not so sure about RETRO COOL [In fashion again]. Is this an in-the-language phrase I’m not aware of? It doesn’t Google well. “IT’S GREAT” is a little more familiar, but it feels rather generic. Still, high marks for the fun long fill. 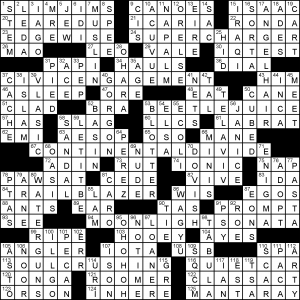 The title of John-Clark Levin’s puzzle doesn’t say much, but the final answer, QUIETCAR, spills the beans. Each of eight two-part theme answers are clued as though the half that is a car model name is not there. It’s a different theme, but it does have the disadvantage that the one half of the answers are barely clued, beyond having to make sense and be a car make. The entries are: [EDGE]WISE (Ford?), SUPER[CHARGER] (Dodge), [CIVIC]ENGAGEMENT (Honda), [BEETLE]JUICE (VW), [CONTINENTAL]DIVIDE (Lincoln), TRAIL[BLAZER] (Chevrolet), [MOONLIGHT]SONATA (Kia) and then a second Kia at [SOUL]CRUSHING.