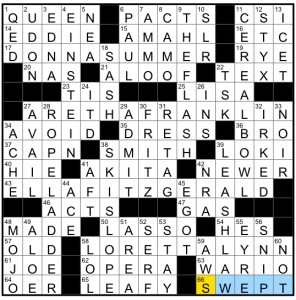 I’m a NYT web-app solver, and today that interface really came in handy. I read the 1a clue, saw that the first two related, highlighted clues were “disco” and “soul”, and thought “oh, so it’s about the queens of various genres, that’s cool”, and then I was off and running. Thus, my “aha” moment in the puzzle occurred before I put in a single letter. Do I wish this puzzle had given me a bit more to figure out? A little, but I also got a super fast time, so I’m not mad. In fact, the only thing that slowed me down this whole puzzle was not knowing how to spell EINSTEIN.

If you don’t know one of the women, the clue doesn’t give you much to go on, but honestly all of these women are so famous across all generations that I doubt folks will have much trouble with their names. I will say that if you google “queen of country” the first hit is Dolly Parton (also 11 letters!) instead of LORETTA LYNN, but there was a movie made called “Dolly Parton: Queen of Country” so that probably inflates her stats a bit. I also think that it could have been cool to put another theme-adjacent answer at 66a – “music”, maybe? – but I understand not doing that if the fill would have been negatively impacted.

Speaking of fill! I thought it was pretty good overall. I really liked THE FLASH, SKI SLOPE, and ROPE LADDER – actually, there is an impressive amount of long non-themed fill given that there are 4.5 theme answers. The only cross I see that could be problematic is SLR/AMAHL, the former of which I only know from crosswords and the latter I had never heard of. I think the clue on 11d [Good name for a postseason football game sponsored by General Mills?] for CEREAL BOWL is a liiiiittle forced, but I don’t mind it. The grid is also well-laid out given that two of the answers are 14 letters long, which can be hard to work with – it doesn’t feel swamped by three letter entries, and the middle in particular is nice and open. Overall, a very enjoyable Monday for me! 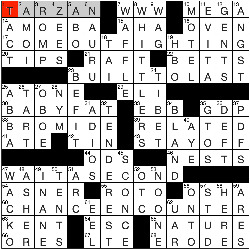 Give this puzzle a CHANCE and you’ll surely come through, since it’s a nice easy Monday. Going down to the revealer at 60A [Bumping into someone, say … and what the end of each answer to a starred clue can have?], we get CHANCE ENCOUNTER. I could wish for a revealer clue that’s a bit shorter, but anyway what that means is that the last word in each theme entry can be added to the word CHANCE to make a new phrase.

So: Lots of thematic material here, although I think some sacrifices were made to get there. The fill is nice and easy, with nothing harder than ASHER to get in the way of a quick Monday time.

The title is “Ladies’ Night” not because “Night” has anything to do with the theme, but because the structure of the title is exactly the same as it is for the theme entries: a possessive first word followed by a noun. And in this grid, all of the first words are women’s names. 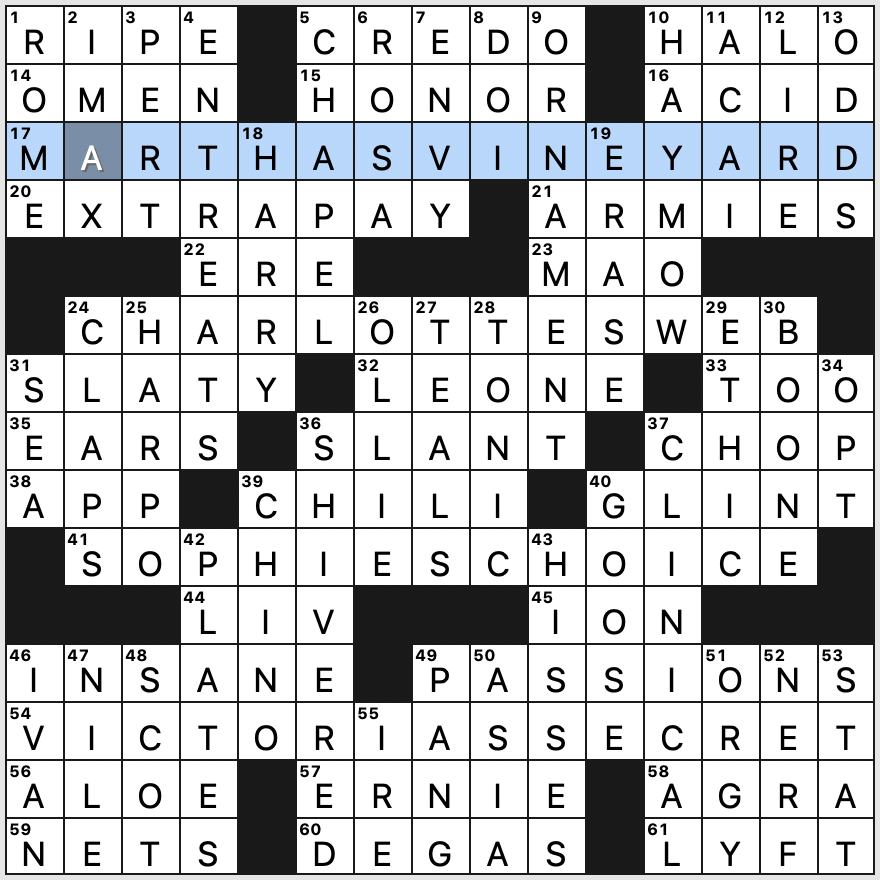 Solid theme with a consistent structure and instantly familiar entries. A good set for a Monday grid.

The supporting grid is Monday-clean (with one exception—for me, anyway) with nice entries PASSIONS, EXTRA PAY, ORNAMENT, and SHIVERED. The one exception was HAY MOW [Barn area], which I had to return to again and again to ensure all the crossings checked out. I know a hay loft, but not a HAY MOW (apparently, they’re the same thing). I found this on The Word Detective.com:

The “mow” in “hay-mow” (rhymes with “cow”) is a completely unrelated noun meaning “a heap or stack of hay, grain, corn, etc.” or “a place, especially a part of a barn, where hay or corn is heaped up and stored.” This “mow” is also a very old word (“muga” in Old English) that comes from Germanic roots meaning “heap.”

The more you know…

What else? Ah. Clues!

Well, they’re mostly straight over the plate, but I do like [General assemblies?] for ARMIES.

An entertaining and edifying grid. 3.75 stars. 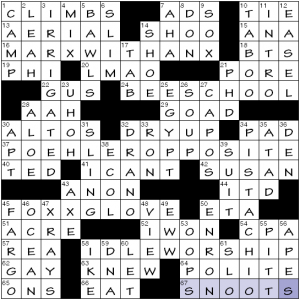 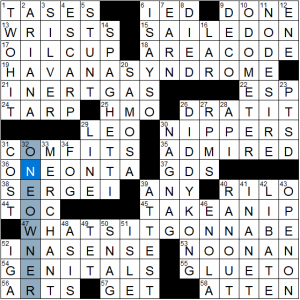 Two long answers in today’s BEQ themeless: the in-and-out-of-the-news HAVANA SYNDROME (19a- Unexplained health problem whose symptoms include ringing ears, fatigue and dizziness) and WHAT’S IT GONNA BE (47a- “How can I help you?”). I’m not sure the clue matches the tone of the latter entry, but it’s a nice seed, for sure.

Between those big entries, there’s limited connectivity thanks to all those black squares in the middle. I find in grids like these that I’m more likely to see every clue. Today, I moved generally clockwise, ending in the West, near hockey player SERGEI Bobrovsky (38a- Two-time Vezina Trophy-winning goalie Bobrovsky).

Unfortunately, there were lots of eyebrow-raisers for me moving through the grid: TWO HIT, IN A NET, OPEN ON, prefix API-, abbreviations GDS, TOC, and LAR.

Theme: The first word of each theme answer can precede the word “run” 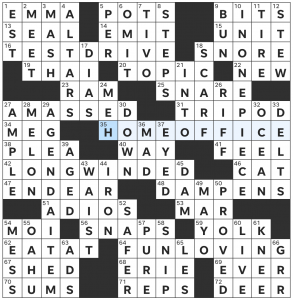 This was a cute title to see after the NYC marathon yesterday! I did not run in it, but one of my friends did so I waved at him as he ran by. He had actually signed up to run it well over a year ago, but last year’s race was cancelled. Congratulations to anyone who participated yesterday, or did any type of long-distance running recently! It is a serious athletic feat. Even a half marathon is completely incomprehensible to me.

Thanks Claire, for a super clean post-marathon puzzle! 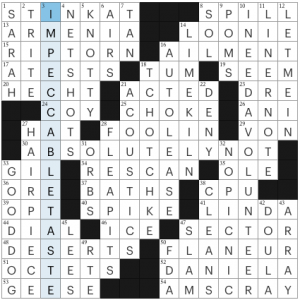 This grid layout is so cool! The 15s linked by a 13 that pierces an eye- or almond-shaped center, a different vibe and great flow. Super-smooth fill, too.

Fave fill: RIP TORN, ABSOLUTELY NOT, FLANEUR (a [“Gentleman stroller of city streets,” per Baudelaire]—I flaneured this very morning and it was gorgeous out, likely the last sunny/62° day of 2021), IMPECCABLE TASTE, TCHOTCHKE, NO PICNIC, and LINER NOTE (which I’d prefer to be in the plural).