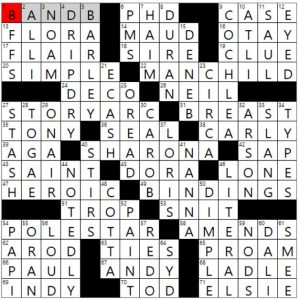 Title: “There Goes Rhymin’ Simon”
Prompt: The meta for this puzzle is a song from the ’70s.
Answer: “Kodachrome” by Paul Simon

90 minutes until deadline, and my 10-for-10 perfect year is in serious jeopardy. Yesterday I got what must be the first two steps, but the third (and final?) step is proving elusive. I’m going to go ahead and blog it and see if that works — it did last month, so maybe I’ll get lucky again! Only 71 correct so far, so this could be a steep hill I’m climbing.

First insight: there are five, and possibly six, famous “Simon”s in the grid, none of them clued to the famous Simon:

A wild card is FLORA Simon at 13-Across, a singer I’ve never heard of but who does have one song on YouTube with 1,000,000+ hits. I give her a 20% chance of being relevant here. Also note that all five of these SIMONs are on the Acrosses, as is FLORA, who now goes up to 25% chance based on that.

Second insight: there’s a grid entry that rhymes with each of these five (and indeed six):

Is FLORA still able to hang with this crowd? She is, since DORA appears at 45-A. Flora’s up to 30% chance of relevancy here. As far as I can see, each of these six has exactly one rhyme in the grid, too. So a solid set to which FLORA may or may not belong.

Now what? I didn’t see anything suspicious in the clues. The most promising path I’ve found is to look at the letter changes of these rhymes:

SIMPLE DIMPLE is S –> D, and SYD is in the grid at 64-D. That whole section is suspicious; why not ANNA and TOM, say, instead of ANDY and the odd TOD? He’s definitely using SYD or TOD for something. I think. Anyway, yielding the Y.

CARLY BARLEY is C–>B, and CAROB at 30-D. Yielding ARO in the middle.

This gives us MAROYODA reading from left to right, and I’m stumped now. All of these steps have been so logical. Steps 1 and 2 were clearly right, and all I can think of that would give Pete any flexibility at all on the contest answer is to use the first-letter changes. It’s also the most logical thing to focus on, and in each of our five cases there;s exactly one grid entry that starts and ends with the first letters of the rhyming pairs. Plus using SYD explains that odd lower-central part of the grid.

So this all seems so logical and natural, but then…MAROYODA?

WAIT I got it! It’s “Kodachrome” off of — you guessed it — “There Goes Rhymin’ Simon”. Those letters in MAROYODA were correct but I didn’t have them in the right order. In order of their first word in the grid:

YODAROAM rhymes with Kodachrome. What a subtle and lovely meta! Step 1 arrived quickly, Step 2 did as well — but that third step was a toughie! But perfectly logical, and with the same click as in Step 2: there was exactly one grid entry that met the requirements for all 5 entries, so very likely to be the right path in each case. And then that final step, yielding those 8 letters than seemed so promising, but required yet a fourth logical leap to unmask — one of the slickest maneuvers in the Muller Canon, I’d say, and there’s a lot of material to choose from. From gibberish to AHA! In five seconds.

4.90 stars. This is why we solve metas! “This” being the endorphin rush I’m feeling at the moment and I hope you got it as well. I leave you with two relevant songs:

See you back here in December!