This week we’re looking for an event for people of letters. I made this fateful statement last week: This puzzle proved to be one of the most challenging WSJ puzzles in recent memory. I was able to solve last week after teaming up my friends, but we were equally stumped by this one. There were four 12-letter theme entries, each comprised of four three-letter words: 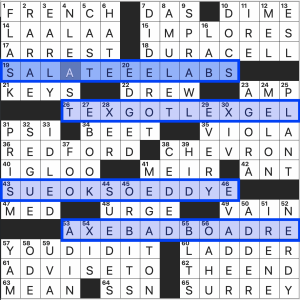 1a was also thematic: FRENCH (“Language in which you’ll need to know how to pronounce two three-letter words”). MEAN (63a: “2 for 1 and 3, say”) seemed potentially relevant.

I tried to build 3×3 grids of the three-letter entries and got nowhere. Four-by-four (four theme entries with four words) seemed relevant. I tried to stack those in various ways, and briefly pondered 3d chess. I hunted for three-letter French words. I spotted DRE (the end of many French words) in 53a. I searched for number-relevant entries like SSN (9 digits), DIME (10 cents), etc. I continued to flounder.

I inferred the contest answer was 8 letters long, and SALATEEELABS (1,5) probably contained the first and fifth letters, TEXGOTLEXGEL contained the 2nd and 7th, etc. I listed the unique letters of each theme entry in my notes:

I wrote a Bash one-liner to brute-force potential answers and the 8-letter word BOOKABLE popped out. BOOK seemed thematic, so I guessed it was two four-letter words, so I searched for BOOK…., and SALE popped out. But.. EBOOK is in the grid, so that’s probably a dead end.

I tried to backsolve my brute-forced answer. Google Translate translates BOOK as LIVRE, and VENDRE as SALE. DRE was in the grid, but the signal died there. No amount of solving or backsolving got me anywhere. I don’t submit for the mug when I get help on the WSJ, but my brute force was a solo effort (and it’s probably wrong anyway), so I submitted BOOKSALE as my Hail Mary answer.

Matt’s MGWCC contest has a steady week 1 through 4/5 difficulty increase, but the WSJ is unpredictable. The Muggles have a great tradition of reserving the first page of comments for solvers announcing they are “on shore” (they solved the puzzle). If you’re wondering how difficult the WSJ is: see how long it takes for comments to reach page two. That may happen in 20 minutes on an easy week. Last week’s first page two comment was 15+ hours after the puzzle debuted, this week took over 17 hours. So I suspect I am in good company. Solvers: please let me know what I missed in the comments.