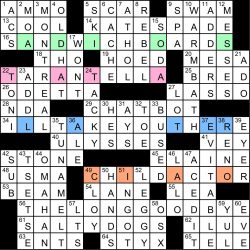 Hello there, everybody! Hope you all are doing well as we quickly head toward the holiday season!

Parting is not such sweet sorrow in today’s grid, with the first four theme entries having circles inside of them and, when put together, forming words that is another way of saying goodbye. The final theme entry, THE LONG GOODBYE, acts as the reveal (56A: [Edgar-winning novel by Raymond Chandler (and a hint to the puzzle theme!).

How about those non-themed nines of KATE SPADE (14A: [Designer of the Dottie Lady Bug crossbody bag]) and SALTY DOGS (61A: [Vodka-and-grapefruit juice cocktails])? Talk about fun, fashion-forward and tasty in a grid! This is probably the third or fourth time ever that I’ve seen/heard EVITABLE be used, and it was just as awkward now in seeing it than it was those previous times (37D: [Not predestined]). Unfortunately, NDAs (non-disclosure agreements) have been in the front and center of some horrific stories, most of them dealing with abuse toward women, in the past few years, and, thankfully, many people are putting up the good fight in making sure there is reform to confidentiality clauses (28A: [Secret-protecting doc.]). Boy, does a nice, long WARM BATH sound great right about now, even if my outstretched body won’t be able to fit the bathtub and leave me any wiggle room (10D: [Relaxing soak]). Again, being 6’4″ does have its disadvantages!

“Sports will make you smarter” moment of the day: MONTRÉAL (3D: [Home of Canada’s McGill University]) – Yay, a clue referencing a place I’ve been to in person! (Not just Montréal, but McGill.) Since we’re coming up on an Olympic year, with the 2022 Beijing Winter Olympics nigh, might as well talk about some Olympics and, specifically, the only Summer Olympics to be held in Canada: the 1976 games in Montréal. So what stood out in those games? Well, those were the Olympics in which Nadia Comaneci became the first gymnast to record a perfect 10 score. Montréal was the games in which Caitlyn Jenner (then Bruce Jenner) won the gold medal in the decathlon, which then led to the  image of Jenner crossing the finish gracing the front of a Wheaties cereal box, with Jenner becoming more synonymous with Wheaties than any of the great athletes who ever appeared on the box. Another American track legend, Edwin Moses, won the 400 meter hurdles gold, one of 122 consecutive races that he won in that discipline! (Talk about records that will never be broken!) Oh, and America sent to the Olympics, inarguably, the greatest boxing team ever assembled: Sugar Ray Leonard, Leon Spinks, Michael Spinks, Howard Davis and Leo Randolph. All of them won gold medals, four of the five then became world champions professionally. 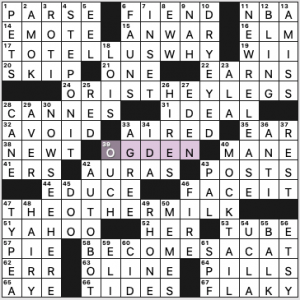 The theme here is the ends of a few bits of verse written by OGDEN Nash:

Not wild about the theme. I’ve enjoyed some Ogden Nash in my time, but just wasn’t feeling it tonight.

Fave fill: MOCKTAIL, NEW RELEASE. I liked DRY-EYED but it did rankle a little to have eyes in the NEWT and FIRE clues.

Theme: Phrases that hide anagrams of BAN as revealed by BANANAGRAMS (59a, [Popular word game, or, read differently, a hint to the circled letters]). 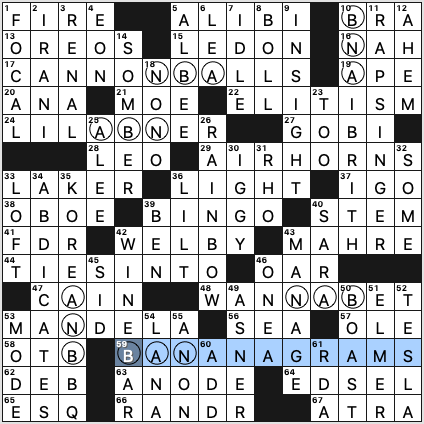 It was pretty clear what was going on after solving the first two themers, but the revealer made for a welcome verification, and the play on words had just enough of a surprise to it to warrant an aha. The themers are all interesting and lively, and I note that all six permutations of the three letters in question are presented. A fine set.

Secretary of the Interior DEB Haaland

THEME: –YRU- in the middle of common phrases. 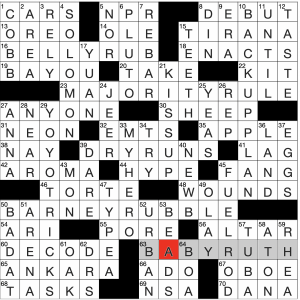 Fun enough phrases to uncover with a consistent theme (the title serves as the revealer, though I’m not sure it should have a question mark in this case). I rolled my eyes when I saw the hint for the first themer: […*Theme hint: Note three letters in each starred clue’s answer)]. If a clue is asking you to note specific letters, then those letters should be circled, right? And Universal is standing pat in the land of technology that is unable to employ circles. It’s odd in this one, however, because I don’t think circles would be good. I feel it would be too much of a giveaway. And yet, I understand why the “hint” is there too. So, I find the nudge a tad strange, but I can very much appreciate its existence.

Is filling an OREO with toothpaste a common prank? I’ve never heard of it. Gross!

I assume the questions mark in [Sweat spot?] for PORE is supposed to make us think of “Sweet spot,” but that seems a tad forced to me too.

SOLOMON Islands, FUEL ROD (as clued), and the English Horn vs. OBOE.

Fun puzzle and grid today, with a theme in the downs! 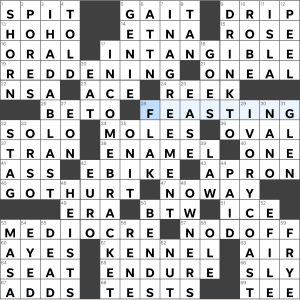 Theme: The themers start with “I” and end in “T” in the downs

Today’s titled had my thinking about the downs but took me until the solved grid to deduce the full theme. It’s a fun one that the title does describe but won’t give much away during the solve. IHADABLAST is a fantastic entry and was an easy fill for me, as was INCOMEBRACKET and INAGREEMENT. All three are common enough phrases to me and the clues weren’t tricky. IVORYCOAST took me the crossing to complete. While it’s a country name instead of a phrase, it still fits the pattern and is also two words, similar to two of the other themers. “Kedjenou” is new to me but I enjoyed the cluing and now want some of this Ivory Coast chicken stew.

Stumpers: REDDENING (first three letters filled in then I got stuck), REEK (used to seeing “odor” so this took me longer to get), and GAIT (tried “walk” and “pace” then relied on crossings)

Down themes are always a fun twist, especially with some long acrosses, which gave me an initial brief pause as to which were the themers. Great puzzle! 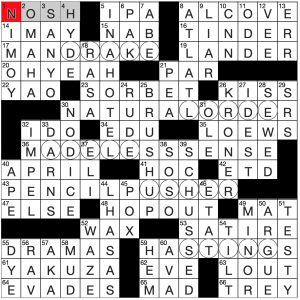 The flavor text adds “five for five,” so we are looking for some 5-letter names in the circled squares. I don’t think there is an indication that they are all music artists; did I miss it?

Kind of a mix of old and new, but mainly because STING is in there! I watched the old Dune movie recently (since there is now a new one!), and he has quite the role in there. Of course I am probably the only person who HADN’T seen the old one! I may read the books, since it looks like there will be a series of Dune movies. Not too much obscure trivia this week, but still a lot of fun stuff in here. 4.5 stars from me.

That’s it for now! Another Jonesin’ coming next week! 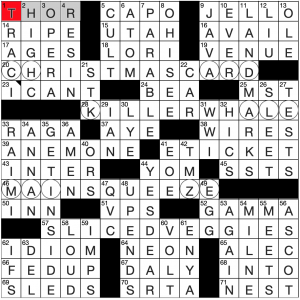 We have a collaboration between a couple of excellent constructors, and the puzzle does not disappoint! We have circles! The revealer is the last them answer:

So we have chard, kale and maize literally “sliced” in that they form the beginning and the end of the thematic entries. Also slightly timely, since maize is basically only discussed during this time of year! (Unless you’re talking Michigan colors of maize and blue, but that maize isn’t a vegetable!) A tightly made construction is exactly what I would expect from this duo. Perhaps more collabs are in the cards, if there weren’t others already that I don’t know about? 4.6 stars from me.