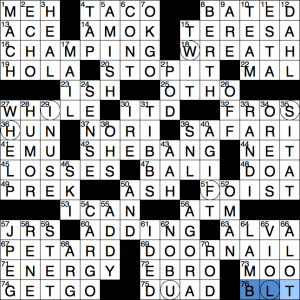 hello and welcome to episode #701 of matt gaffney’s weekly crossword contest, “We’re Looking for a Phrase”. back to week 1, and i tackled this without the instructions. what are the theme answers? well, seven different across answers are unclued, with only a parenthetical number in place. each of them is part of a familiar phrase, and one of the other key words in that phrase has the same length as the parenthetical number:

with most week 1 puzzles, we’d already be done, but looking at the first letters of those extra words doesn’t spell anything (BRBWHDF), so we keep looking. the grid has an unusually high word count (86, well above the normal limit of 78 for a 15×15 grid), so there are probably more than just these seven shortish theme answers. and indeed, there are seven more: for each of the implied words above, there is a grid entry that differs by just one letter:

taking the changed letters in the grid (circled in the screenshot above) and reading them off in grid order gives WISHFUL. that’s certainly a word—but probably, we perform the meta mechanic one more time to get THINKING. i was going to submit just THINKING, but i did check the instructions before submitting, and they do say that the answer is a two-word phrase that’s something to avoid when solving metas, so i changed it to WISHFUL THINKING.

i thought this was a very fun meta. it’s fascinating how many words there are in the english language that predominantly or entirely exist only as a part of a given idiomatic expression, and it’s a really cool basis for a meta. there were definitely more steps involved than a typical week 1; to me it felt squarely week 2-ish, not that i minded. i was a little nervous because i didn’t actually get around to solving the crossword until 11:30 am on tuesday (busy weekend, followed by attempting to catch up on other puzzles), and had a mild moment of panic when the answer didn’t immediately jump out at me after i figured out the theme mechanic, but luckily it wasn’t long in revealing itself after that.