Theme: The “kuh” sound is added to familiar phrases. 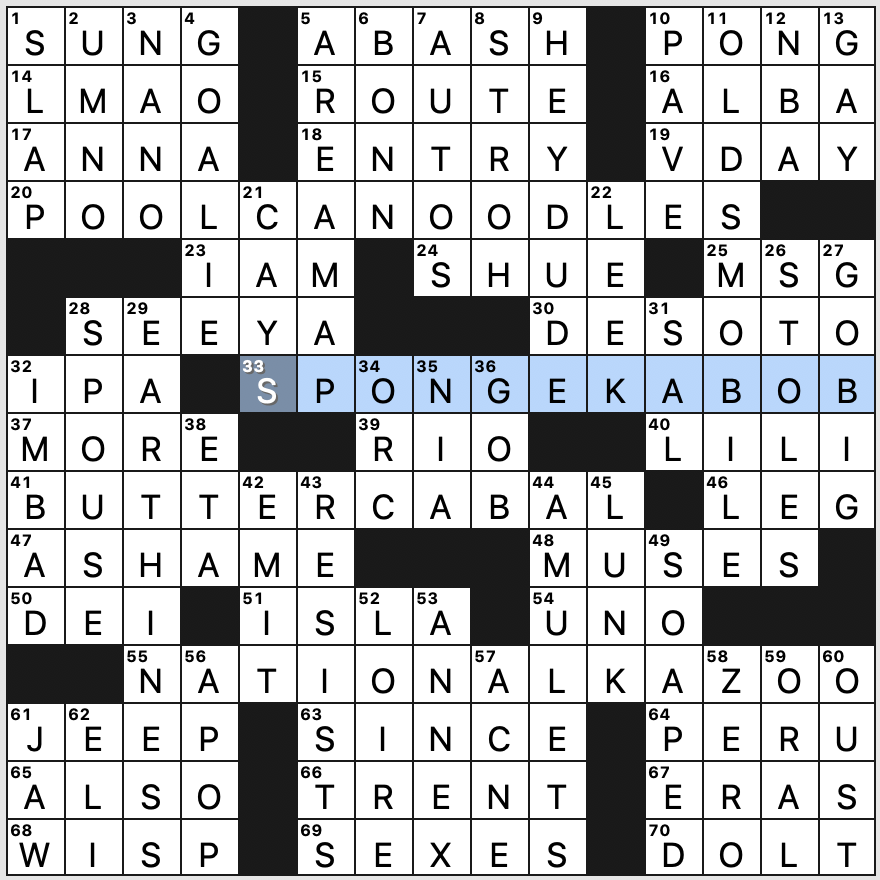 It took me a while to sort this out, since I solved it in an airport and was not on the right wavelength. But it’s a fun theme executed well. I like that it’s balanced with two CA additions and two KA additions.

I liked HEY DUDE, OLDSMOBILE, and AREA MAP in the fill, although I briefly considered FREE MAP for the last one [Concierge desk giveaway]. 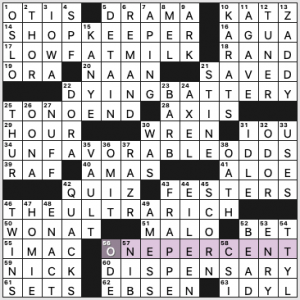 The revealer is ONE PERCENT, clued as 56a. [Small amount], and the other four themers are things that ONE PERCENT can apply to: 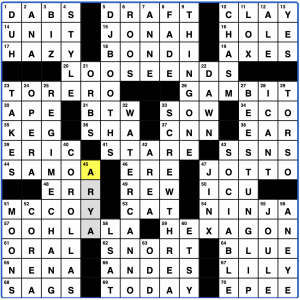 Neville Fogarty has this week’s AVCX puzzle and I liked it a lot:

We’ve quite literally got LOOSE ENDS at the bottom of the puzzle, as E, N, D, and S from 4 of its down entries are “loose” from the grid. 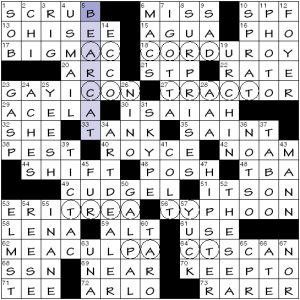 The circled squares span the gaps and the letters spell synonyms for ‘deal’.

The cluing was almost entirely businesslike and just-the-facts-ma’am, so for convenience and haste’s sake I’m going to keep this write-up short as well. 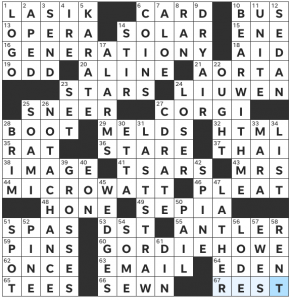 Theme: Each theme answer ends with a word that sounds like a question

Here’s my question – what happened to “who” and “where”??? I’m joking, but the theme set feels a little incomplete without them. I know approximately four hockey players but luckily GORDIE HOWE is one of them, so once I had a few letters I could put in his name. I didn’t recognize LIU WEN as a theme answer for a long time because it’s a shorter answer without a symmetric pair (MICROWATT is a row higher than it). I’ve talked about my thoughts on asymmetric puzzles before, and those thoughts are still present here – I like the theme and know that a symmetric theme set would probably include worse entries, but the grid design on the whole can feel a bit inelegant and random/confusing.

Things that tripped me up today: “wheels” over WEDGES for 45a [Shapes of many blocks of cheese] and “welds” over MELDS for 29a [Fuses together]. I liked LAST STRAW, BEAR WITH ME, NOT A CHANCE. It took me a while to see DRY AIR for 9d [Low-humidity environment] because I feel like that’s a part of a desert climate, not a climate itself? But it’s crossed with CORGI so I can’t be too upset. Oh, and I will always be a fan of cluing RENT in relation to the musical. 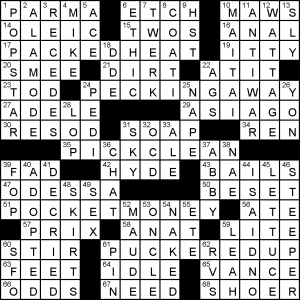 Kurt Krauss’s LA Times theme today is a simple “vowel progression” theme where we go from PACK… to PUCK…, mostly in longer words. The odd black square chunks in the middle of the grid are likely a design choice affected by the central nine, PICKCLEAN. 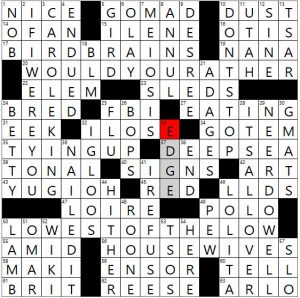 I love the way the long entries interlock in this grid from Aimee Lucido: each corner has two 10s intersecting a 10 and a 14.

And — you know what I’m going to say now — what great conversational entries filling those slots! IF I WERE YOU, WOULD YOU RATHER, IT’S ALL OVER.

I particularly liked the balance of WOULD YOU RATHER and LOWEST OF THE LOW, given that the clue for the former (20a- Lead-in to an often terrible choice) had me thinking “worst” for a while.

Lots of neat stuff from a variety of knowledge areas, too: MEIOSIS, YU-GI-OH!, LOLITA, CAROLE KING, the irresistible TV show NAILED IT.

I could see the DES’REE (9d- “You Gotta Be” singer) and ILENE (15a- “Empire” executive producer Chaiken) crossing being a challenge for some, but now you know it for next time, and “You Gotta Be” is such an earworm! I’m probably harder than most on entries like OF AN (14a- In the blink ___ eye) and GO MAD (5a- What Ophelia and King Lear both do). The clue style for the latter is also a pet peeve of mine, but at least it’s not (Who has walked on Mars?) for “NO ONE”. Anyway, your mileage may vary.