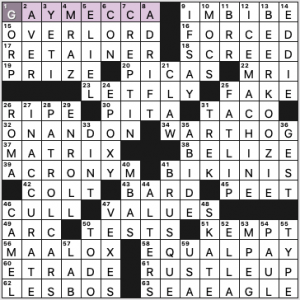 Solid 72-worder here. Fun to start right off at 1a with a GAY MECCA. I love living so close to Chicago’s GAY MECCA, Boystown—there was such a fun vibe at the Whole Foods there last weekend, since Mr. International Rubber Weekend was going on. I tip my hat to people who embrace masking and double-masking so enthusiastically!

Other fave fill: WARTHOG, LET FLY, BELIZE, MAALOX, EQUAL PAY, RUSTLE UP, VEXES, CREPT IN, BRUSQUE, and BEER KOOZIE. I use a koozie for cans of cold pop—a jaunty rainbow stripe, courtesy of a bank that tossed them out as Pride Parade swag a few years ago.

Theme: Each themed answer is a phrase with the first letters of each word spelling out LOL. 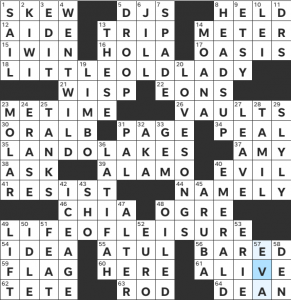 Overall, I thought that this was a solid theme. I saw the title and knew immediately what it was about, so that was solid if a little unsurprising. It’s also pretty impressive that there was no duplication in the O words for these answers. All three are tied for my favorite here, so sound off in the comments if you have a specific opinion.

Additionally, grid-wise, I thought that this was interesting, especially how closed-off the center three three-letter words (PAL, AKA, and GEM). However, I genuinely moved through this puzzle so smoothly.

Some Friday faves for you:

Overall, a nice Friday puzzle! I hope you enjoyed it, and I’ll catch ya next time!

Theme: The letters of DOOR are found in “revolving” order in various familiar phrases. 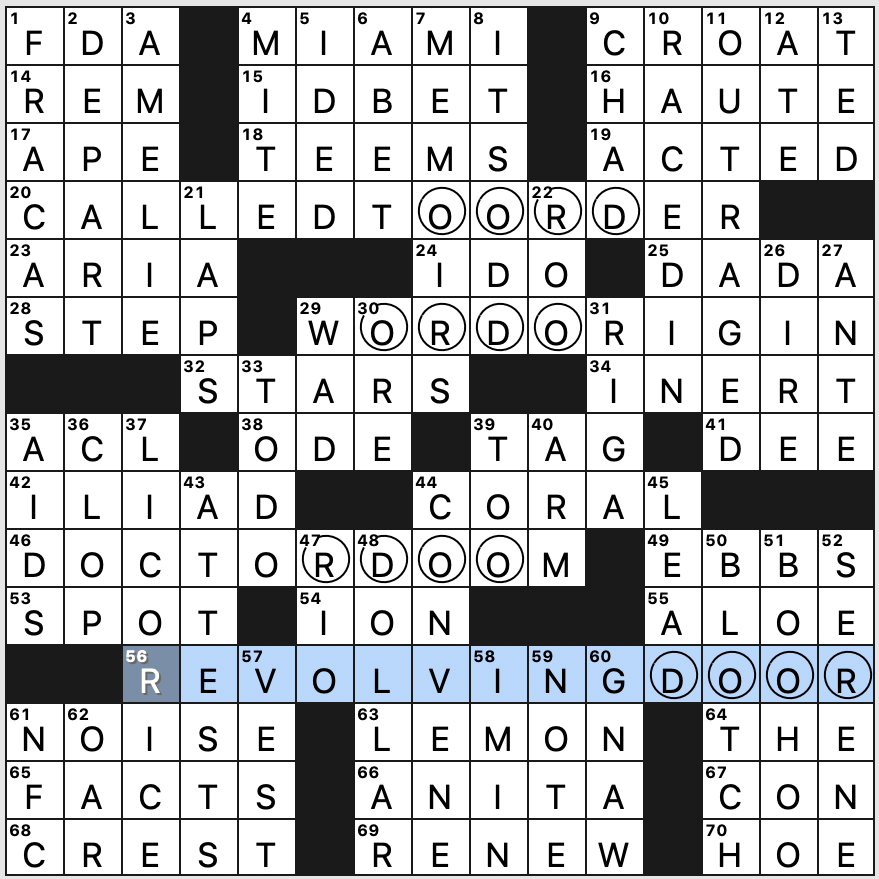 I thought this theme seemed familiar. There are a couple instances of it in the Cruciverb database but one was from the LAT and one was from the WSJ and neither used these exact entries (except the revealer of course). So while it’s not an original theme, the entry choices are different from those other two and I enjoyed it well enough.

The fill is pleasant as well with LICORICE, FRACAS, BLOTCH, and BOO-HOO as my favorites, and nothing really to scowl about.

Clue of note: 4a [Florida’s second-largest city]. MIAMI. Whoa. News to me. It turns out Jacksonville is more than twice as large as MIAMI, population-wise. 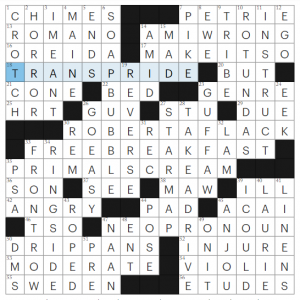 I really like themeless puzzles that have a central staggered stack of entries. I usually see 11-letter or 13-letter words there– this layout allowed Erik to stack two 12-letter entries with one 13-letter entry. Notes below: 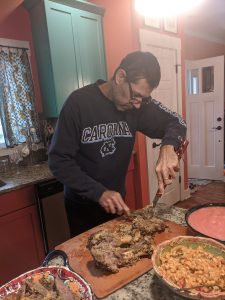 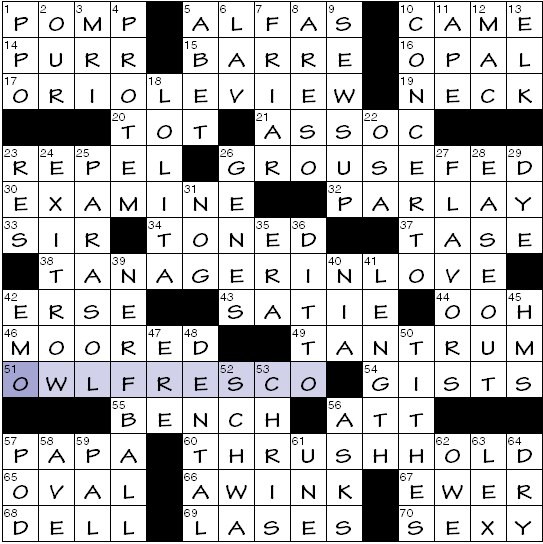 Some of these stretch quite a bit, but they’re still decipherable. 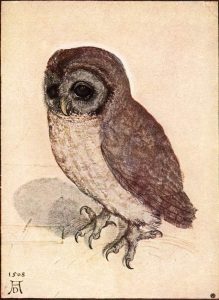 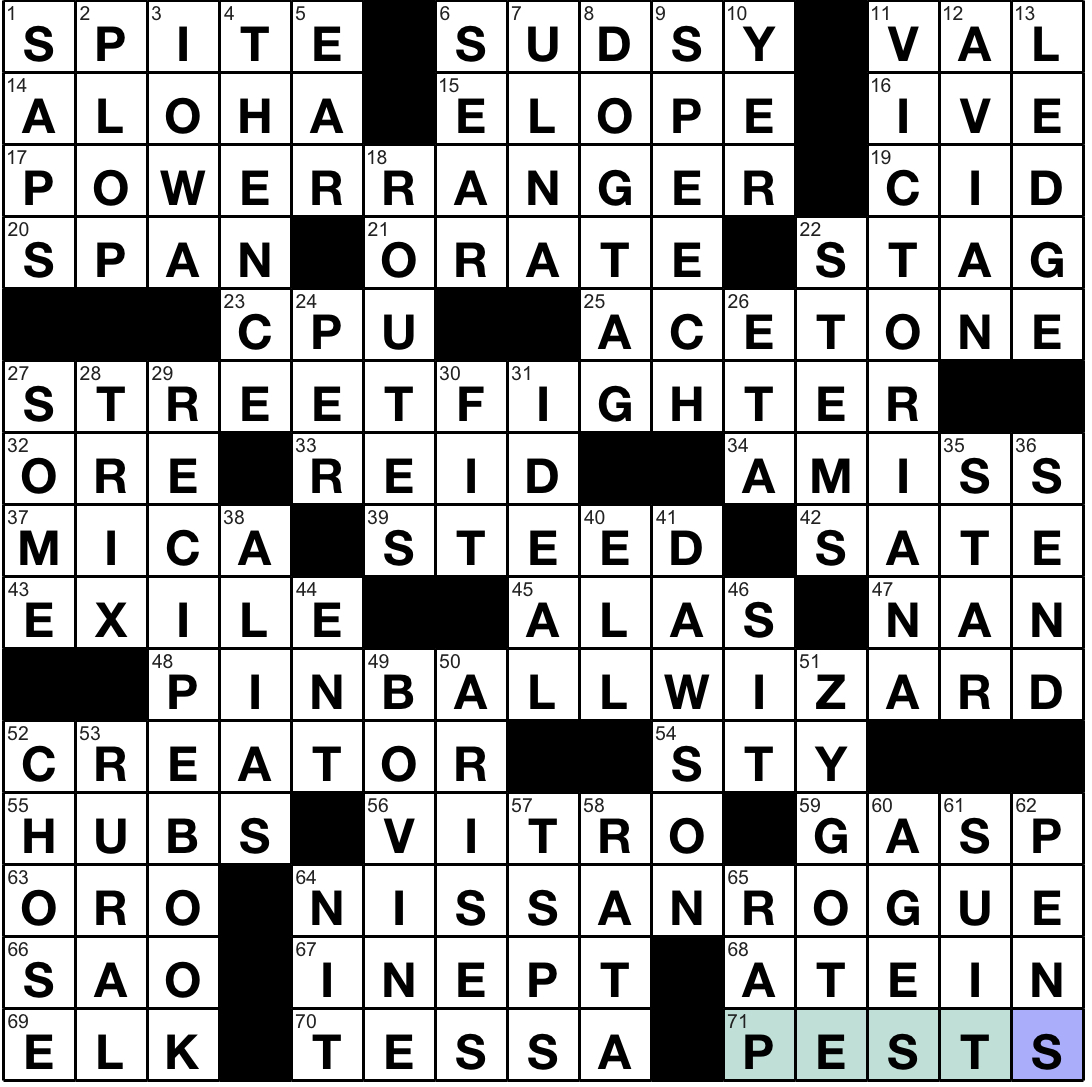 Quick write up today. I loved this theme- PINBALL WIZARD came first for me, since I was raised on show tunes and classic rock, but generally smooth sailing thanks to these clever answers NISSAN ROUGE felt like a bit of an outlier, since the other answers were all people, but the charm of the puzzle made up for any momentary trouble that caused.

The non-theme stuff was clean too. I got a nice flow going and breezed through the grid, entertained along the way.

And here’s PINBALL WIZARD for your viewing and listening pleasure